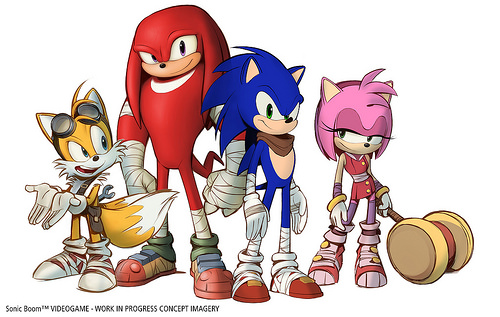 Sega Spinning to Keep Up With Sonic Fans Amid Reboot

Sonic the Hedgehog fans, salivating over speculation on their favorite Sega character’s big comeback for the better part of the last year, have finally caught a glimpse of a character redesign as Sega continues to scramble with rumor control.

It all began last year when Sega confirmed early buzzings of a cross-platform Sonic by announcing a worldwide partnership with former rival, Nintendo, leading to two games released exclusively on Wii and Nintendo 3DS, including the panned Mario & Sonic At The Winter Olympic Games: Sochi 2014 and the mildly successful Sonic: Lost World, which sold 640,000 units, according to year-end financial reports.

But earlier this week, a promotional sign spotted at a Nuremberg toy fair generated rampant speculation, particularly due to a bullet point indicating a new 2015 title TBA for all three platforms: PS4, Xbox One, and Wii U. Perhaps because the notion conflicted with the Nintendo arrangement, Sega quickly quashed it, with Community Manager Kellie Parker stating on the Sega forums: “The recent information coming out of Nuremburg Toy Fair was incorrect. Sega has yet to announce details of upcoming console video games for Sonic the Hedgehog, or further details regarding the new Sonic CG TV series.”

Though professional, the statement couldn’t stop an avalanche of design leaks on reddit that forced Sega’s hand to officially announce their makeover plans for their hedgehog protagonist. Called Sonic Boom, the “new branch of the Sonic universe includes the first-ever CG animated television series, new games for Wii U and Nintendo 3DS, and a new toy line,” spouts the official Sega blog. 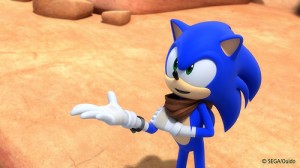 Perhaps sooner than intended, fans got a peek at the Sonic Boom game trailer, an animated series trailer, and new design concepts for their beloved hedgehog – but the reaction is mixed, to say the least. Donning a brown scarf and sports tape, the hero’s new look garnered comparisons to a hipster barista with angry fans sounding off on the official Facebook page. Again, Sega quickly responded to quell concerns. “Sonic Boom is a new branch of the Sonic universe and does not replace modern Sonic,” the team posted on Facebook.

And with that, cue the speculation on Sega’s plans for its “modern Sonic.”