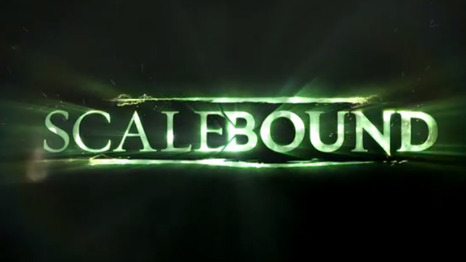 Scalebound, the newest game by Hideki Kamiya of Platinum Games fame, debuted near the end of the Microsoft Press Conference earlier today at E3.

Hideki Kamiya has long been a favorite director of mine personally, I rank several of his games among my top action games of all time, things like Bayonetta and Devil May Cry 3 and 4, even Vanquish was outstanding. They’ve been getting further and further into the exclusive game space, Bayonetta 2, after all, was a Wii U exclusive, and their next title, Scalebound is no stranger to this, being solely for the Xbox One.

The game is dripping with Kamiya’s brand of snark. The protagonist would be right at home among the ranks of Dante and Nero, complete with white hair, a funky arm and a pair of blasting headphones. It almost seemed like they might move in a more conservative direction, until the unnamed protagonist smirks in the face of the giant monsters he’s faced with and blasts into action, slicing and dicing and donning a suit of supernatural armor in the process.

Considering the number of Xbox One exclusive titles that were announced, you might just convince me that one is really worth having soon. For now, gaze upon the game in all its glory.