Lucas Pope has rather unceremoniously released a very early version of his newest project, Return of the Obra Dinn, and it’s quite unlike anything I’ve played in recent memory.

Pope is better known for his recent cult hit Papers, Please, Communist immigration labor lottery simulator (for lack of a better genre title). The game has been very well-lauded not only for its unusually potent emotional and psychological effects and relevancy, but also its very stark metagame look at the repetitive nature of games and life both. You can see more on that here. 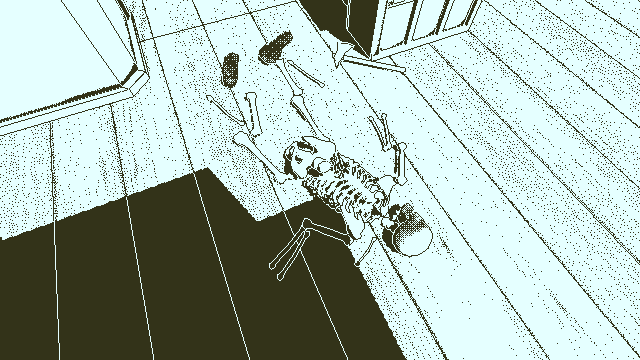 Return of the Obra Dinn is quite unlike Papers, Please, but already oozes just as much style and clever construction, and holds obvious hallmarks of yet another game that can truly affect those that play it.

in 1802, the merchant vessel Obra Dinn departed from London with a massive cargo of trade goods, as well as a good many passengers and crewman. After six months, the ship hadn’t reached its rendezvous point, and was thought lost. Rumors circulated about the ship for a time. Six years later, the ship drifted back into port with damaged sails and no crew to speak of. It was immediately assumed to be cursed.

You play as an insurance adjustor for the East India Trading company. You’re tasked with boarding the ship, recovering its logbook, and determining the fate of the ship and her crew. That would be a monumental task, but you’ve one particular skill that might aid you: the ability to briefly jump back in time to the moment of a person’s death, through the use of a curious pocket watch.

Pope’s previous games have often been lauded for their intriguing gameplay concepts and execution—Papers, Please basically tasked you with inspecting documents within a particular set of rules as quickly and accurately as possible, not exactly considered to be a “fun” thing to do in most games. Were the game to be considered without the “game” part and told as a story, it’d be generally boring as hell: a guy selected to man a border inspection booth spends the majority of his days looking at passports and work permits, occasionally letting people through that he shouldn’t and dealing with his bosses on occasion. Certainly there is story there in how he (you, as the player) interacts with his family when bringing home the day’s pay, and some other events that are occurring around his cramped space, but that would be the extent of it, the gameplay brought the rest to life.

In Obra Dinn, Pope plans to focus more on the story and bring people in that way. The game plays as a fairly traditional first-person adventure game. You move about with the WASD keys, press your spacebar to open doors and use items, and hit tab to view the crew manifest, once you’ve found it. The part of the game that’s more intriguing is your goal, identifying the fates of the crew, which is where the time travel ability becomes intensely useful. 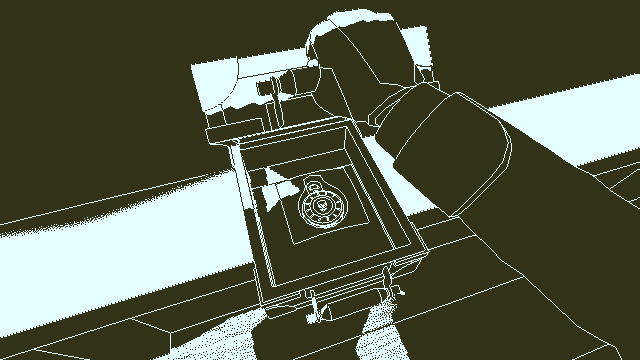 Upon stepping over a skeleton found on board, you can jump back to the point of that person’s demise. You’ll get a brief stint of dialogue against a black screen, and then are presented with a scene in which the occupants are frozen. You are otherwise free to explore for a limited time. The first you’ll find, for instance, is an obvious attempt at mutiny. Some men attempt to force entry into the captain’s cabin, at which point one is shot. The dialogue was necessary to determine who the captain is, but we do not know the identity of the victim, nor his nearby friend. 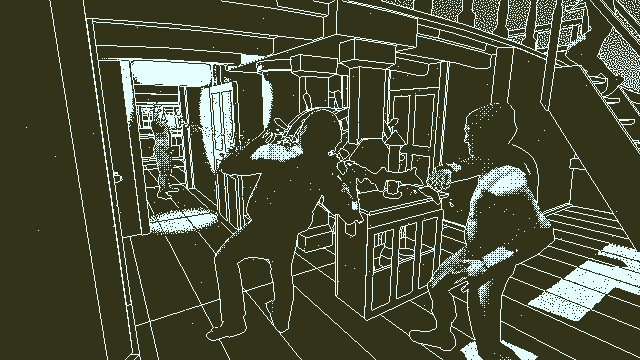 By the end of the demo, you’re calmly informed that you’ve reached the end of the available content (it takes a matter of minutes to get through) and that the fate of two crew members can be determined. I’ll not spoil it, it’s really quite clever as to how you make that connection. While a few minutes is all it takes to discover the first few, the sheer number of options given for what might have become of a given person on the ship is staggering: they may been killed, they may remain alive somewhere, or their fate cannot bet determined. If they were killed, were they killed by an animal, a crewman, or themselves? Did the murdered use a gun, a cannon, a knife, or some other object? Did they drown?

This only began to pique my interest in the game even more when I discovered that the crew manifest was eight pages long, each holding ten or twelve people. This is going to be a complex game to explore, and that excites me.

The game also features a very slick and imaginative presentation. Pope has long been a nostalgic fan of the visuals present on his old Mac Plus, and is essentially riffing on the old 1-bit dot-matrix-esque visuals with Obra Dinn, albeit in a three dimensional space. The game otherwise uses only deep shading, resulting in a very stark but evocative visual experience. The game uses its negative space really well, and telegraphs when you can interact with objects by making your character’s physical presence known. Approach a door, and your character reaches out and grasps the handle, for instance. Step over a place where you can rewind time, and you’ll pull out your watch. 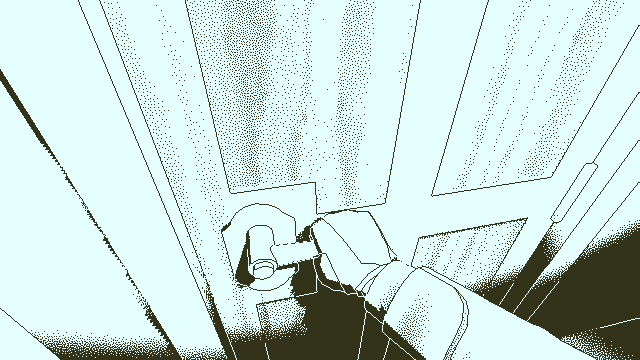 As has been stated, this is an insanely early build, but it displays a lot of potential, and is a clear display of Pope’s ability to make an amazing experience. No word on release yet, but if Pope’s original estimates of about a six month dev cycle are accurate, we might actually be able to play this in just a few months. Grab the demo for yourself on Pope’s website and see what you think.