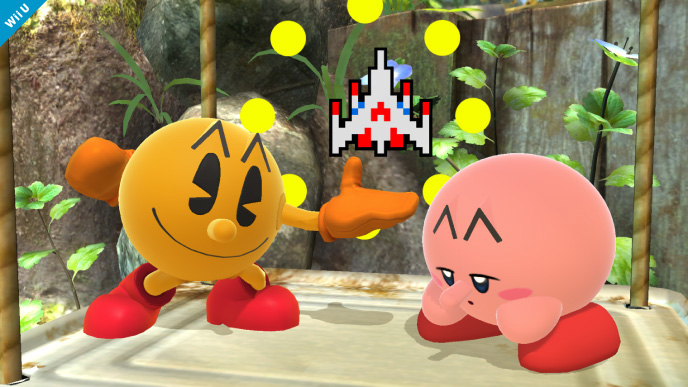 Our favorite round yellow garbage disposal/ghost hunter Pac-Man has officially joined the Super Smash Bros. crew for the Wii U and 3DS.

At a closed roundtable Nintendo dev discussion, the game’s director, Masahiro Sakurai revealed that Pac-Man will be in the game. The event didn’t have any kind of live stream or direct coverage, so when the tweet first appeared, many thought it was a joke.

That train of thought was quickly (ahem) smashed, when a full trailer was put out, showing Pac-Man in his full glory! His art, most of the time, is more reminiscent of his adventure game days, from games such as Pac-Man World, so he’s got arms and legs, and sports red gloves. Some of his move, however, change him to his 2D form temporarily, allowing nostalgia to take over.

Other moves seem to include using the ghosts against your foes, tossing some of the various fruits from the original games, with differing effects, or even bringing other iconic Namco images to life. This is all rounded out by the inclusion of a stage modeled after the old Pac-Man arcade game.

So what do you think? Is Pac-Man going to be your new go-to fighter? Or is Nintendo really stretching this time around?