So if you’re a fan of Payday 2 like I am, you probably at least cast a cursory eye on the “What’s Next” campaign that OVERKILL had running on their website.

It was a month-long hyper-overt guerrilla marketing stint that was slowly releasing audio clips to indicate what was, you know, next from OVERKILL and their managing publisher Starbreeze. Cruising through the subreddit r/paydaytheheist, I’d see speculation daily on what was upcoming. Many picked up on the possible zombie theme early, excited to see a shift in the Payday mentality to some degree.

After all, the countdown led up to the anniversary of the release of Payday 2, and was pumped through the official Payday steam community group. Plus, this isn’t totally unheard of: a heist in the first game crossed over with Left 4 Dead and saw the four characters running through Mercy Hostpital to locate a patient with the “Green Flu” and extract a blood sample, essentially playing with a whole patient-zero what-if scenario.

The hype train grew in momentum daily, but was totally derailed by the final reveal this morning: it’s not another Payday game or update, it’s a new Walking Dead game, complete with appearance by Robert Kirkman to vouch for the studio.

Understandably, the Payday community has been somewhat jilted by this experience, and I can totally understand that. As I said, all this trickle-down news was being linked to by OVERKILL directly through the Payday 2 community group, and seeing as the only two games under OVERKILL’s collective belt are the two Payday games, it was reasonable assumption to think that the news would be related to the game.

So let’s get our bearings here and address this piece by piece.

I understand your feelings of betrayal, Payday players, I really do. I’d really love to see more thing come to the game, it’s been a mainstay for me ever since I nabbed it on PS Plus, and especially since I was able to move to the PC version during the Election Day free weekend. More features or even another entry in the series would be great to see, I would’ve been excited. What we’re seeing are reactions more akin to someone sleeping with your SO at some party: 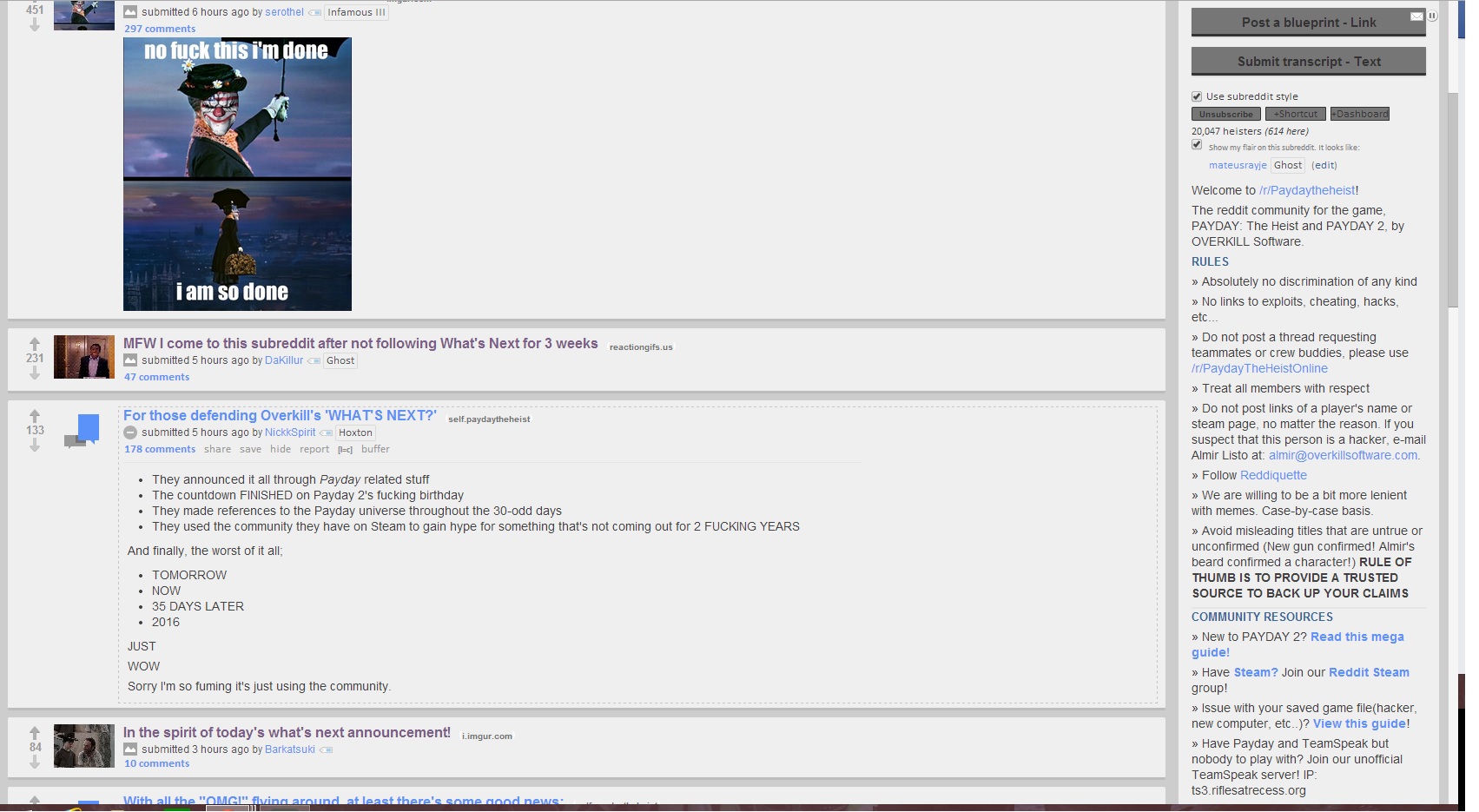 While it’s not everyone complaining all the time (the loudest voices do tend to stick out with extreme feelings), I’m not sure I see the reason to be so upset. Outside of the fact that this was primarily piggybacked on the sizable and highly excitable Steam community, we already have several Payday updates inbound that we already know about. Did we all forget about that Dentist trailer? The one that’s literally the opening movie of the game now? In case you somehow forgot the awesome video, here it is:

We’ve already seen one piece of all the goodness from the trailer: The Big Bank, the largest map added to the game to date, and the one that introduced the Dentist’s unique preplanning mechanic, allowing players more control over some aspects of the heist. My big question, though, is this: with the existing knowledge of this update already in our minds, how is it that so many seem to be so up in arms about OVERKILL getting another big franchise?

After all, we’ve really only seen what they can do in one paradigm. The Kirkman portion of the reveal had the man telling us that it’s going to be “the co-op game that all The Walking Dead fans have been waiting for.” I was really into The Walking Dead some time ago, I had the early compilations (didn’t quite get in when the comics were first releasing), I’ve got signed compendiums, and no shortage of memorabilia around my place of residence. That being said, outside of Telltale’s excellent adventure adaption of the game, I’ve been falling out of it all recently. The television show has been in what I consider to be a steady decline, the Activision game Survival Instinct was a relative tragedy, and even the comic books are now reaching a point of absurdity I’ve had trouble adapting to.

But I would be all over seeing what OVERKILL could do for a zombie-themed experience, even more so one that is directly assisted by Skybound and Kirkman. Perhaps it wasn’t the most straightforward or…”socially” acceptable way to go about promoting a game that doesn’t exactly relate to the groups it was promoted in, but I don’t find this to be news to be upset about, however, as the Reasonable Gamer, I do understand your (their, if you’re unaffected) frustration as to the means of delivery.

I mean, imagine it: a game where four intrepid survivors, each with a different skill set, set off to collect supplies from an abandoned grocery store. The place has been locked up tight, and might be occupied by bandits or other survivor groups, so you’ll need to plan accordingly. You could shoot open the doors or find a weak point in the barricades and bust your way in, but you’ll alert anyone inside, as well as any shambling cannibals in the nearby area. In doing so, you should make sure you’re in and out fast, the longer you stay, the more zombies will hound you, and the bandits inside might be able to call for assistance.

Or, you could try to sneak in. Find a spot they didn’t think to look, avail yourself of as many supplies as possible and avoid conflict—preserving precious resources (and your health) in the process, and avoiding any contact with walkers. Maybe you’ll try to increase your take by killing the occupants, a riskier endeavor that might still attract attention, but could result in a much greater acquisition of resources than before.

Obviously this is all speculation, but I just want people to grasp the potential here. The Walking Dead Telltale games have been an amazing emotional experience, but sometimes people just want to focus on their own survival. Payday has done an amazing job of featuring just a series of standalone levels that only loosely hint at a larger scheme—it’s the Dark Souls of first-person shooters in the way that it lets the players absorb the narrative, instead of throwing it in your face. The dentist mentions Bob McKendrick in the above trailer, but McKendrick is only mayor now because the crew was hired to hack voting machines to swing the election.

Hell, heisters in Payday have been clamoring for the return of the old Hoxton (Jim Hoxworth) ever since it was revealed—not through any kind of gameplay, or even through any cutscene—that he had been replaced, and was now in jail. The Walking Dead is a little more overt in its use of character and interactions, but if the attachment to characters who quite literally speak in game only to celebrate victories or to tell people to stay on the ground, the Skybound guys are going to be able to really connect us to whomever we end up playing as in this new game.

And hey, if any of the references over the course of the What’s Next campaign are any indicator, we’ll see enough shoutouts to the Payday crew in the game anyway.

So calm down, heisters. Remember, we’ve got plenty in the pipeline already (I’m particularly stoked to rob the casino). Rest easy knowing that OVERKILL might actually make the zombie game that we end up wanting to play as much as we love robbing banks and jewelry stores. I envision awesome rescues from rival bands of survivors, supply raids gone wrong, or even base defense against waves of enemies, while your compatriots prepare escape routes. I keep spitballing, but that’s because I really believe there’s potential for a nice, pick-up-and-play co-op zombie game that has that sort of go-big fervor that OVERKILL has injected into heisting.

Oh, and weapon customization. Lots of it. Just please balance the drop rates of weapon mods. Or something.

Anyways, check out the reveal below, and you can read up on the more direct press release business here. We’ve got a while to wait, looks like this game won’t be due until sometime in 2016—but that just lets the hype train roll faster after all the tears dry up from the people who have religiously followed What’s Next. I’m with you, buddies. Let’s go rob the Benevolent to make us feel better, yeah?

Almost forgot! Payday 2 players weren’t left completely out in the dust, as we did get an update that gave us Negan’s weapon of choice as a melee weapon: Lucille, the baseball bat wrapped in barbed wire. Pretty good stats, too. So there’s some other good news, too!