The Super Smash Bros. hype train has restarted after a brief hiatus with today’s announcement that Mewtwo would be rejoining the roster after being replaced between Melee and Brawl.

Although he wasn’t exactly a top-tier combatant, Mewtwo was long a favorite of mine in my more dedicated Smashing days. It was the right mixture of arrogance and power that joined up nicely with his obvious deficiencies and made victory with Mewtwo that much more sweet back in the day.

His method of acquisition is going to be a little different than any other character in the series, however: Mewtwo will be available as a downloadable character for free to those that purchase both the 3DS and Wii U versions of the game. Similarly, it isn’t going to be available immediately, but rather is scheduled for completion and release in Spring of next year. 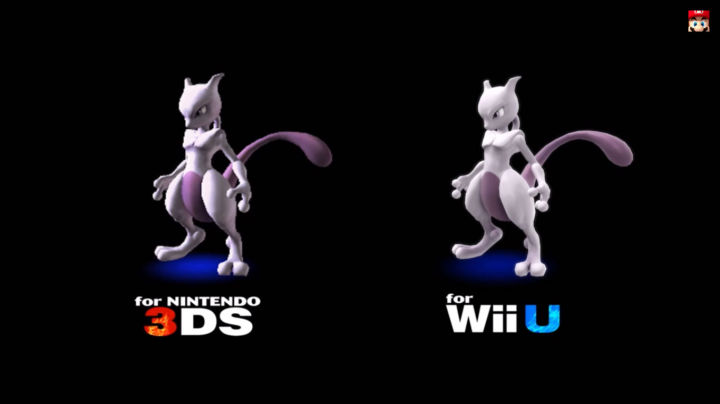 The reaction to the reveal has been generally positive so far, even considering the unusual requirements for its use. It’s actually really interesting to see the way that the fans of other games on other systems have reacted to similar plays with vitriol and anger (Why are they forcing me to buy extra stuff to get this awesome thing!?) but to this with excitement and positive fervor.

I should clarify, however, that the wording of the tweets regarding the release doesn’t imply that you’ll be barred from using Mewtwo if you don’t purchase both versions of the game, but are instead rewarded with the free download by registering both versions. It’s extremely likely that it will be available as a paid DLC for those that are for whatever reason limited to a single version.

Mewtwo’s reveal came at the end of a lengthy video announcement that revealed an insane amount of now information about the Wii U version of Super Smash Bros., much of which is sure to solidify the game’s place as one of the better games to be released this year, and boldly aims to be the greatest entry in the series yet.

One of the most massive tidbits given away is the ability to play with up to eight players per match on particular stages, with the resulting footage being understandably chaotic and impressive. This goes hand-in-hand with the inclusion of larger stages in the Wii U version. Examples of this include The Great Cave Offensive from SNES classic Kirby Super Star and Palutena’s Temple inspired by Kid Icarus.

Another first for the series is coming along in a Donkey Kong stage that gives fighters two planes to fight in (remember Guilty Gear Isuka? No?) using a semi-complex series of barrel cannons to travel between the foreground and background. Using the barrel wreathes your character in non-harmful flames, and using a barrel whist aflame will result in a painful explosion.

Metal Face from Xenoblade Chronicles will appear randomly while playing on the Gaur Plains stage as an organic obstacle, causing wide-area damage and offering some choice comments about the proceedings. He can be KO’d for an extra point to whomever deals the final blow.

Similarly, Ridley (of Metroid fame) makes a return in a similar capacity, but can now also align himself with one of the players on the field. Similarly, he can be smacked around to grab an extra point (even by his allied player), but is definitely an interesting element to introduce some additional chaos to the battles, and give a little push to a languishing player.