In the early days of DOS and wishful circling of scholastic catalogs, my grade-school teachers had only a few tricks up their sleeves when it came to engaged learning. For a social studies unit on Native American tribes, I was instructed to collect and paint toilet paper rolls to resemble totem polls. When faced with a lesson in physics, we were granted the excruciating task of designing a bridge with toothpicks in high hopes that it would support the most weight in a contest. Though educational (well, sort of), these mandatory builds paled in comparison to some of today’s projects.

Case in point, in central California, 7th graders are collaboratively building an ancient Chinese city in their world history class, studying the finer points of architecture and public planning during the Tsang Dynasty. In Australia, students simulated a rainforest accurately placing native species of flora and fauna from floor to canopy as part of a lesson on human society and its environment. It’s all virtual, of course, and part of a growing trend in education: learning via video game. And Minecraft has taken the lead.

From its humble beginnings as an indie game designer’s full-time hobby and nod to Dwarf Fortress to its $240 million in earnings in 2012, Minecraft has transcended its reputation as a crafty time-killer and found its way into the school system. For the uninitiated, Minecraft is a first person sandbox game that positions the player as an omnipotent builder of all things pixel. Levitating (literally; the player can fly) somewhere between Legos and the Sims, users can design expansive architecture, dabble in animal husbandry, and build modules to their hearts’ content. In survival mode, players can strategize to fight off enemies, but in creative mode anything can be willed into existence, from the USS Enterprise to a brick by brick replica of a Frank Lloyd Wright. Even better, work can be exported, imported, shared and improved: and that collaborative value is what started turning academic heads. 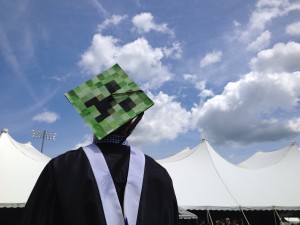 Private teacher Joe Levin co-founded TeacherGaming LLC, after discovering gaming to be a useful tool in his own classes. As Levin explained to the Cooney Center, an independent research organization, “Every kid is a gamer… [and] a completely immersive environment like Minecraft can illustrate a particular student’s learning style.” By assigning cooperative tasks in the video game, Levin was able to identify self-directed learners who take risks and try different combinations of resources and materials, as well as the dependent learners that require more assurance and direction. No matter how they approached their assignments, one thing was clear: students were engaged like never before.

In no time, Levin’s MinecraftEdu was on its feet, representing a collaboration of educators and programmers from the U.S. and Finland. The team works directly with the developer Mojang to make the game affordable and accessible to schools, while offering a suite of tools and lesson-specific modules to help teachers customize it to their liking. And my, how they like it. At the recent MineCon in November, Levin surmised that MinecraftEdu is currently being used in around 2500 schools worldwide – nothing to sneeze at considering its spread has all come through word of mouth. And with growing adoption, more learning modules are contributed every day. Language students are building houses and labeling their interiors in French. Civics teachers are leading explorations on how societies function. Even university students are getting in on the action with immersive classes in Japanese.

It’s a long way from Logo, Number Munchers, and other floppy discs crammed into an Apple II at the advent of affordable computing. And looking forward, other developers, including those in the open source community, are eager to introduce their own learning games. But for now, Minecraft is on the minds of educators around the world so you can pat yourself on the back as you play on… you know, for the children’s sake.