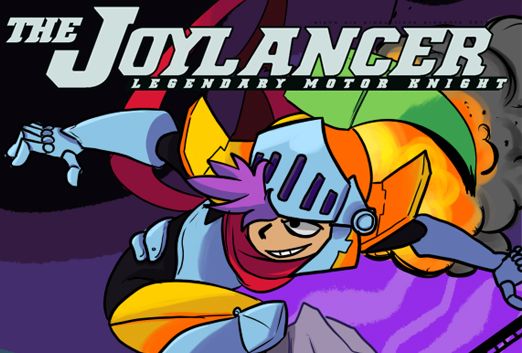 I’m a complete sucker for the old school. Don’t get me wrong, I still love our new age era of gorgeous and intuitive games just as much as the next person, but some of my greatest gaming memories were found in the 8-bit realm. So as you can imagine, I go into a slight fanboy mode every time I see a developer piecing together a project that calls upon the gameplay elements of yesteryear. Recent titles like Shovel Knight, Cave Story, and Rogue Legacy, have all employed this “leap into the past” style of business plan, and have managed to strike a chord in gamers both young and old. Alpha Six Productions is the latest crew to boot up their game time machine with an upcoming release titled The Joylancer: Legendary Motor Knight.

One glance at The Joylancer and you’ll immediately recognize that developers are attempting to craft a retro-inspired release. In fact, this title looks more like an old Gameboy release than any other game we’ve seen so far in 2014. The art team took a lot of meticulous care in ensuring that this particular adventure mimics its early ’90s predecessors.

From a graphical standpoint, we’re reminded of classics like Kirby and Mega Man. Monochormatic color schemes and a very simplistic art palette really helps to sell the illusion, and if you weren’t already aware of this game’s production it would be hard not to believe that it wasn’t crafted during the golden age of gaming. But even in old styling, Alpha Six still manages to add some interesting “modern” features. You’ll be able to customize the colors for the title, allowing you to create your own visual experience, complete with a variety of interchangeable borders and themes. You can even tweak the soundtrack to your liking, adding in and taking out certain themes. I give a lot of credit to the creators for adding in these extra tidbits to give their retro release a little nudge into the future, while still maintaining a visual age.

The Joylancer is a motorized knight, and gameplay reflects his fast-paced talents. Imagine if Sonic the Hedgehog mixed with Mega Man. You’ll find yourself racing through a variety of industrial-looking levels, slamming into foes and drilling through enemies at breakneck speeds. In fact, the combat is so accelerated that it’s often difficult to gauge what’s going on. There are a lot of flashy particle effects and animations, and it can sometimes make it outright impossible to see where your character is located on the screen. But that’s part of the charm and innovation that makes this upcoming release such an interesting affair. It even includes a four-player multiplayer mode, where you can battle your friends for supremacy in an arena. Developers also promise some fun and engaging boss fights, and have hinted that there will be special moves or hidden objects that will allow you to decimate these towering foes almost effortlessly.

The Joylancer is available right now on Steam as an early access title, but it’s important to note that you will only have access to three levels and the included multiplayer section. You’ll have to wait until the game officially releases to play through the entire speedy experience. This upcoming release will cost approximately $9.99, but you can grab it at an early access discount right now for $6.99.