There’s something infinitely gratifying about bringing down a giant monster and making weapons and armor out of its carcass in Monster Hunter. I started my hunting obsession early when the Japanese-born title landed on US shores during the mid-late 2000’s for the PS2.

Since then, this immensely popular series from Capcom has developed a cult following here in the US that will finally be able to get their hands on a copy of Monster Hunter 4 Ultimate (abbreviated as MH4U) in early 2015. For those of us fortunate enough to attend E3 this year, we had the chance to get a hands-on demo at the latest Monster Hunter for the 3DS.

With more than 86 monsters to hunt, new environments to explore exploit for resources, new animations, and two new weapon categories, MH4U will be the largest hand-held iteration of the series to date.

MH4U challenges hunters to test their skill against 64 types of ‘large’ monsters that fall into several different categories according to their body-plan. New to the series are amphibian-class monsters such as the Tetsucabra and Zaboazagiru (not yet localized), a large blood-red frog with monstrous tusks and a mutant landshark, respectively, Chelicerates (giant spiders) such as the Nerusukyura that will make arachnophobes’ skin crawl, and ‘Snake Wyverns’ like the Garara Ajara.  Longtime fans of the series will be also be happy to see the return of many beloved first-generation monsters like the Yian Kut-Ku and Velocidrome that makes the giant pool of monsters to hunt from in MH4U a good combination of new and old.

In addition to the new host of monsters to slay, players are intoduced to two new weapon classes: the charge blade and insect glaive. Similar in function to the switch axe, the charge blade is a hybrid between the classic sword and shield and axe that builds a charge that can be unleashed by the player for massive damage. But perhaps the most interesting Monster Hunter weapon to date is the insect glaive, which offers quick and powerful strikes a la the longsword in addition to a unique pole-vaulting maneuver and insect ‘companion’ that can be unleashed during battle to buff the player. It’s an odd combination of support and combat that will allow hunters to emulate the fast and furious combos of dual-blades with the reach of a longsword. 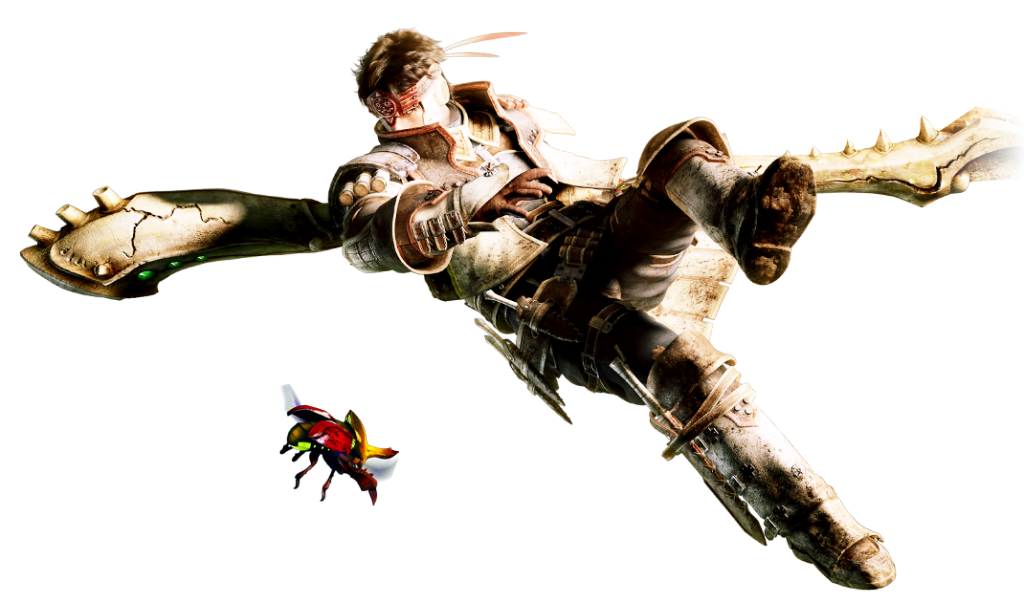 In my initial demo of the game, I was given the option to hunt three different monsters based on a sliding scale of difficulty. The easiest quest was a Great Jaggi quest that I shined on; it’d be child’s play. The middle option gave me the opportunity to try the new Tetsucabra, a tempting choice for a veteran hunter such as myself. But the final option was the one that captured my eye and sealed my fate. Truly suicidal hunters were able to take on the flagship monster of MH4U: the Gore Malaga (pronounced Goh-Ray).

Call it a combination of hubris and bravado, I thought that I’d be able to bring down this new monster without much trouble with my bow in short order. As I familiarized myself with the 3DS control scheme and the Ancestral Steppe map, it felt good to be back in the Monster Hunter world. Right away, however, I could tell that years of playing the previous titles on the PSP would itself as a problem; every button I pressed was based on the wrong hand-held platform. 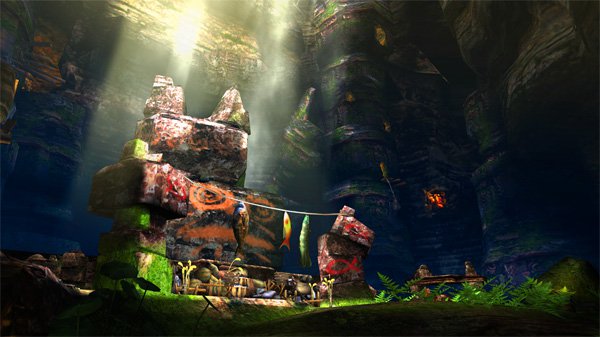 I quickly shook off the notion of trying an easier quest that would let me grasp the controls better and set off after this “all-powerful” Gore Malaga. The new environments looked lush and beautiful as I traversed the many enumerated areas. For the first time in the series, there was an emphasis on vertical terrain which hunters are able to quickly scale and leap from.

It took only a few minutes to discover my quarry: the Gore Malaga. He was huge, bigger than I was expecting; his looming violet-black shape filled the screen. Without hesitation, I began fumbling to nock an arrow and let it loose- the old PSP muscle memory was going to be the death of me. I lost the initiative as the monster turned, roared, and proceeded to vomit a purplish-black substance all over my character. The attack took off a solid chunk of life, knocked me into the next area and inflicted a new status ailment that makes its debut in MH4U: the frenzy virus.

The game paused for a brief second to explain the new mechanic. There’s an intial incubation period which can be mitigated by inflicting constant damage on the monster. Doing so rewards you with a 10% affinity (critical hit) bonus. Failure means that for a lengthy period of time, all attacks dealt to the player do not heal over time; a big penalty. Less than ten seconds into the fight, things were already looking bad.

I gathered myself up again and re-entered the area to combat the beast. This time I was able to nock and loose a short volley of arrows in hopes of curing the ailment. But sure enough, my awkward control scheme coupled with the Malaga’s counter-attack made it so the negative effect of the virus kicked in. I zoned out to drink my dwindling supply of health potions and tenaciously continued to fight.

I had wholly expected the bow to be as powerful as it was in Monster Hunter Portable 3rd, where I was able to defeat most monsters with skirmishing tactics, but the new rebalancing of the weapons in this title became painfully apparent. I feel like I was doing next to no damage to the Gore Malaga and I was running out of time and supplies. 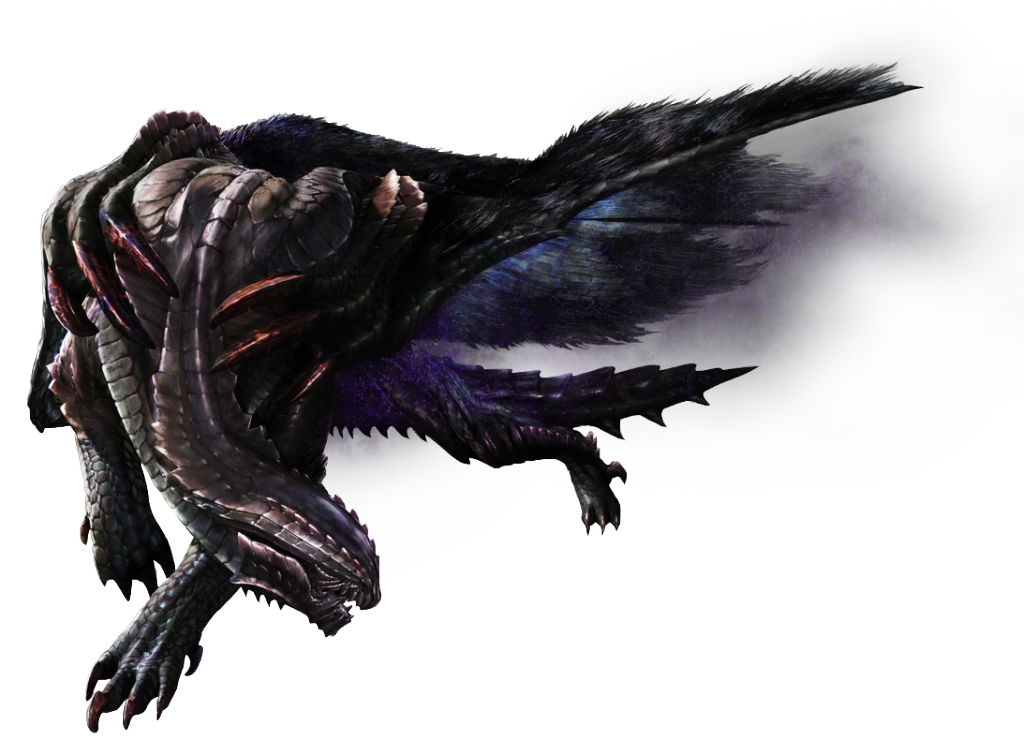 The next ten minutes were spent in a desperate battle where I would loose an arrow for what felt like every three attacks that the monster hurled my way. I fumbled one too many commands and flinched as a massive tail whip knocked my hunter out, costing me precious time and one of my three attempts at victory.

I was starting to take this hunt personally now. Call it persistence or stupidity, but I returned to finish what I had started with the monster. Again, it was a cat-and-mouse exchange where I took more damage than I dished out and found myself riding the KO cart back to camp for a second time.

The quest clock flashed the five minute warning just as we finished another vicious exchange of arrows and claws. As my hunter gathered himself back onto his feet after a nasty body check, I noticed the Malaga beginning to limp away to its eyrie to sleep off the damage I inflicted. The revelation came as a pleasant surprise as I drained my last potion and followed in pursuit to finish it off.

The final fight was on a high mountain perch that was reminiscent of a certain battle between a grey wizard and fiery demon. My tale was far less successful, however. In a desperate gambit to finish my quest before the time ended, I threw caution to the wind and took every opportunity that I had to fire. Right as I was about to be squelched by one of the Malaga’s body slams, the clock timed out and I failed my mission. As I removed my headphones and gathered my stuff to leave the demo area, I smiled.

The loss excited me, because it meant that I had a great and challenging game to look forward to in Monster Hunter 4 Ultimate. With 86 monsters to bring down, more environments, and new weapons to master, I can hardly wait for the game’s release in Spring 2015.