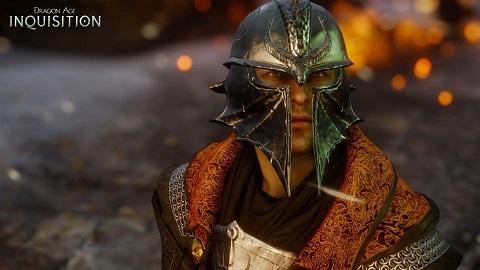 This year’s E3 brought us not only new Dragon Age: Inquisition trailers, but a presentation showcasing some real live gameplay as well. If you weren’t able to attend, don’t worry—I’ve got you covered with a recap and analysis of what we saw. 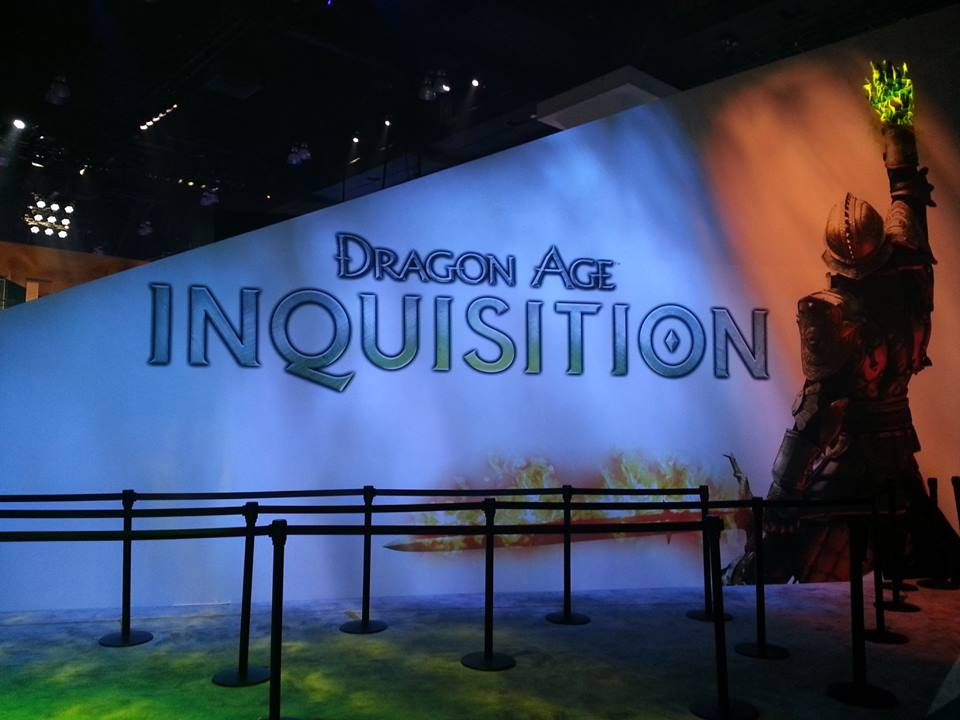 The presentation began by giving us a quick glimpse of an area of Dragon Age: Inquisition‘s world: an locale on the path to the freshly rebuilt Redcliffe. BioWare seems to be taking some inspiration from Bethesda in this arena—not so much in the sense of aesthetics, but certainly in scale. The explorable part of Thedas is orders of magnitude larger than in previous Dragon Age installments; in fact, we were told that the single area which was shown in the presentation is larger than all areas featured in Dragon Age: Origins combined. This was also the driving factor behind the addition of mounts to the game, as it would be difficult to traverse such large spaces completely on foot. Visually speaking, the world is colorful and vibrant, so all that space won’t be wasted on grey rocks ad nauseum. 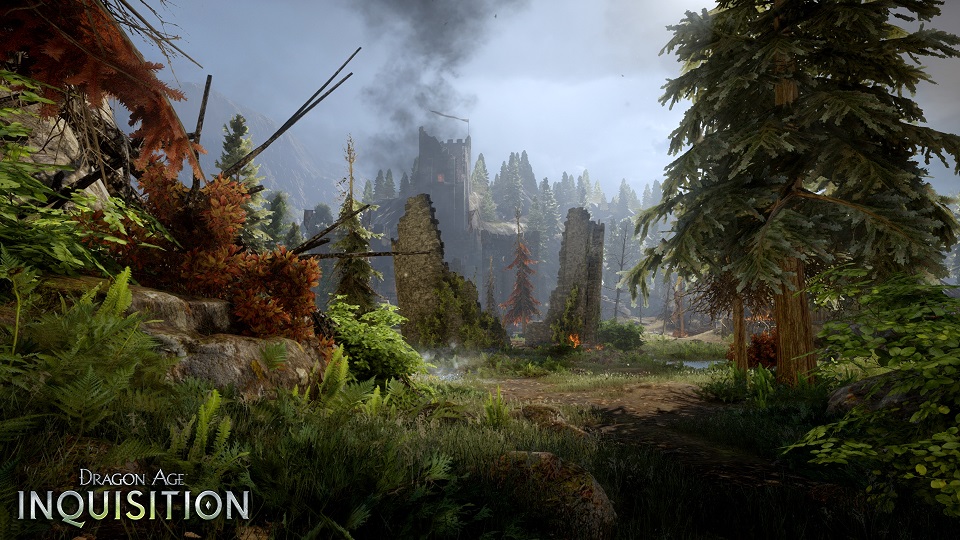 It was again noted that the world will change according to how the player interacts with it; as we have heard before, it is completely possible to hunt all the bears in an area to extinction. How the player runs the Inquisition will also apparently have an effect on the environment, as more control over and focus on an area will add additional guard NPCs and the like along roads.

One element that stuck out to me in both the presentation and the new E3 trailer was the enemy design. Nice as a visually pleasing world is, fighting wave upon wave of skeleton warriors that are…skeletons dressed like warriors kind of makes the whole thing lackluster. One thing I’m confident of at this point is that this won’t be a problem in Dragon Age: Inquisition: the enemies shown, from creatures to undead to the high dragon, were more creative, interesting, and polished—more than just the standard fantasy fare. The undead enemies are downright terrifying: look at the face on that thing at 0:45 in the trailer. I’m not saying I wouldn’t want to meet that down a dark alley, just that a wiser person wouldn’t.

When it comes to dealing with these enemies, combat is an enhanced fusion of that we’ve seen in the previous two Dragon Age games. When you are controlling any of the characters directly (like past games, it will be possible to take control of any party member at any time), you are able to instantly execute a variety of flashy skills a la Dragon Age 2. As for the actions of the party members you’re not currently controlling, it appears that much will be left to the A.I.

It’s not all button spam, though—BioWare is introducing a new “tactical mode,” which allows you to pause the combat and direct your party members strategically before resuming. At its core this is similar to Dragon Age: Origins‘s system. Going by what we saw during the presentation, though, this new system functions much more smoothly, and allows for a more detailed level of strategic placement. This pairs well with the fact that battlefield environments will play a much bigger role in Dragon Age: Inquisition, making it much more useful to position for damage bonuses granted by high ground, flanking, etc., and allowing mages to manipulate the field with AoE spells in a more sophisticated fashion than before. 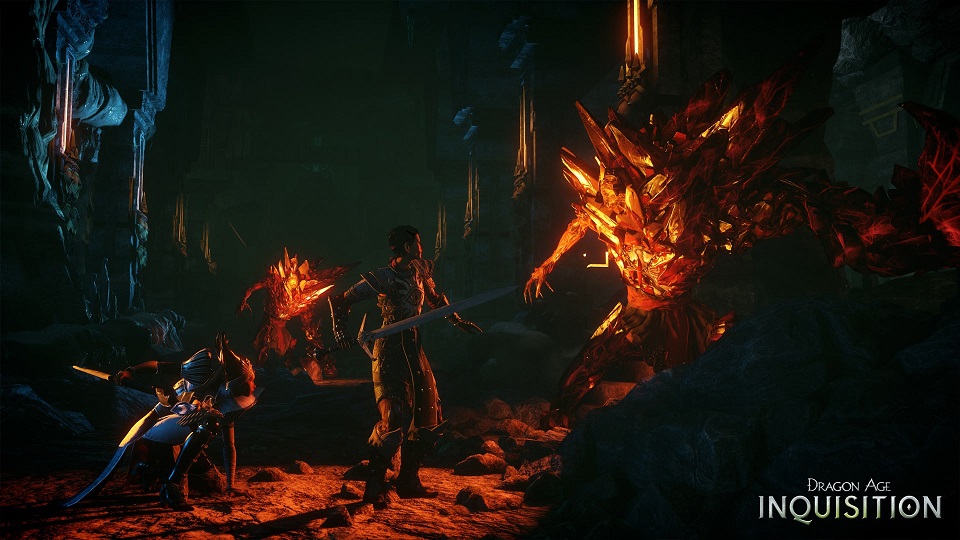 The tactical mode looks pretty awesome in action; the player was shown successfully creating a choke point at a short stairway by blocking off one side using a fire spell, and using a combination of ranged attacks from above and melee attacks where the enemy was clustered to quickly eliminate hostile NPCs.

Of course, the success of this system entirely depends on the A.I. of party and enemy NPCs. If allies can’t execute their orders in an accurate and intelligent way, or enemies just charge blindly despite whatever they are faced with, there will be little point in deliberating over strategy rather than just running in and mowing them all down. It was hard to determine the A.I. level based on what was seen in the presentation, but I at least didn’t spot anything that particularly concerned me, and when the presentation showed off battle against a high dragon, the dragon did seem to change its behavior based on the damage being done to it. I remain cautiously optimistic at this point. 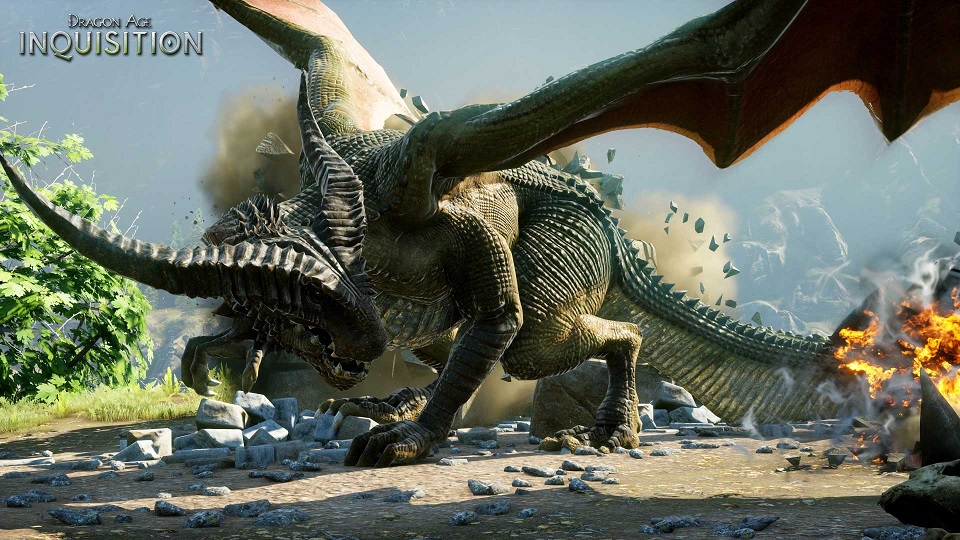 It wouldn’t be a Dragon Age game without compelling storytelling, and the presenter promised that Inquisition has not sacrificed any of the epic “BioWare-style story” despite all the effort that has gone into the expanded world and combat system. A huge part of that story in any of the studio’s games is, of course, how the player’s choices when interacting with their party and the world affect events, and Dragon Age: Inquisition appears to be going all-in on that score. Each of the newly introduced companion characters is a person of importance in Thedas, and has the power to influence people and events in the name of the Inquisition.

One of the best parts of BioWare stories is that they don’t pull any punches when it comes to the events triggered by the player’s decisions. In Dragon Age: Inquisition, what you say and what you ask your companions to do affects not just how well they get along with you, but how they behave. Spoiler ahead: what we got to see during the presentation was a snippet of the story in which the player had sent Leliana on a mission alone, and this had resulted in her being tortured. She was clearly not super pleased with the aforementioned turn of events, and when the player essentially chose to make a deal with the “bad guy”—the life of a hostage for an amulet somehow related to the Breach—she killed the hostage anyway. I have no idea how that would have turned out had the player made different choices, but it looked promising in terms of the player having a real effect on events (whether they intend to or not, as has often been the case in past games), and I am sure we can have faith in BioWare to deliver an experience at least as interactive as that of previous installments. 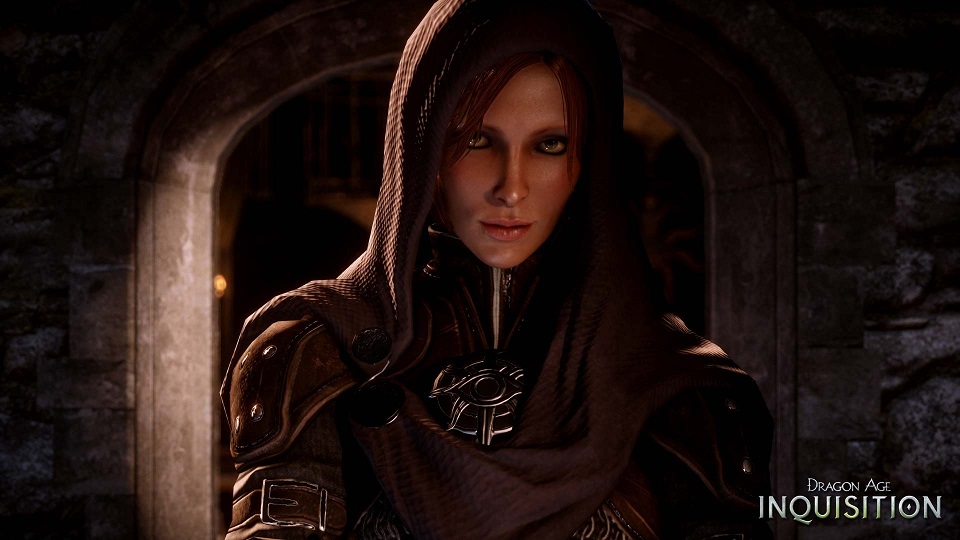 All-in-all, getting the chance to look at Dragon Age: Inquisition was the highlight of this year’s E3 for me. Though most who have been keeping up with the game knew a lot of the information presented beforehand, it was fantastic to see how well the game has come together, and how finished it looks four months before release. Perhaps the most exciting element of it all was the tantalizing clip of the story—it was less than 10 minutes, but I still felt emotionally invested by the end. Frankly, if the story and characters end up being as good as they’ve been teased as so far, everything else in the game could be terrible and I wouldn’t care, but it is pleasing that the gameplay and world seem to be shaping up nicely as well.

Dragon Age: Inquisition is currently available for pre-order for previous and current generation consoles, as well as PC. To get the scoop on all the other details available about the game so far, check out our overview. October 7th can’t come soon enough!