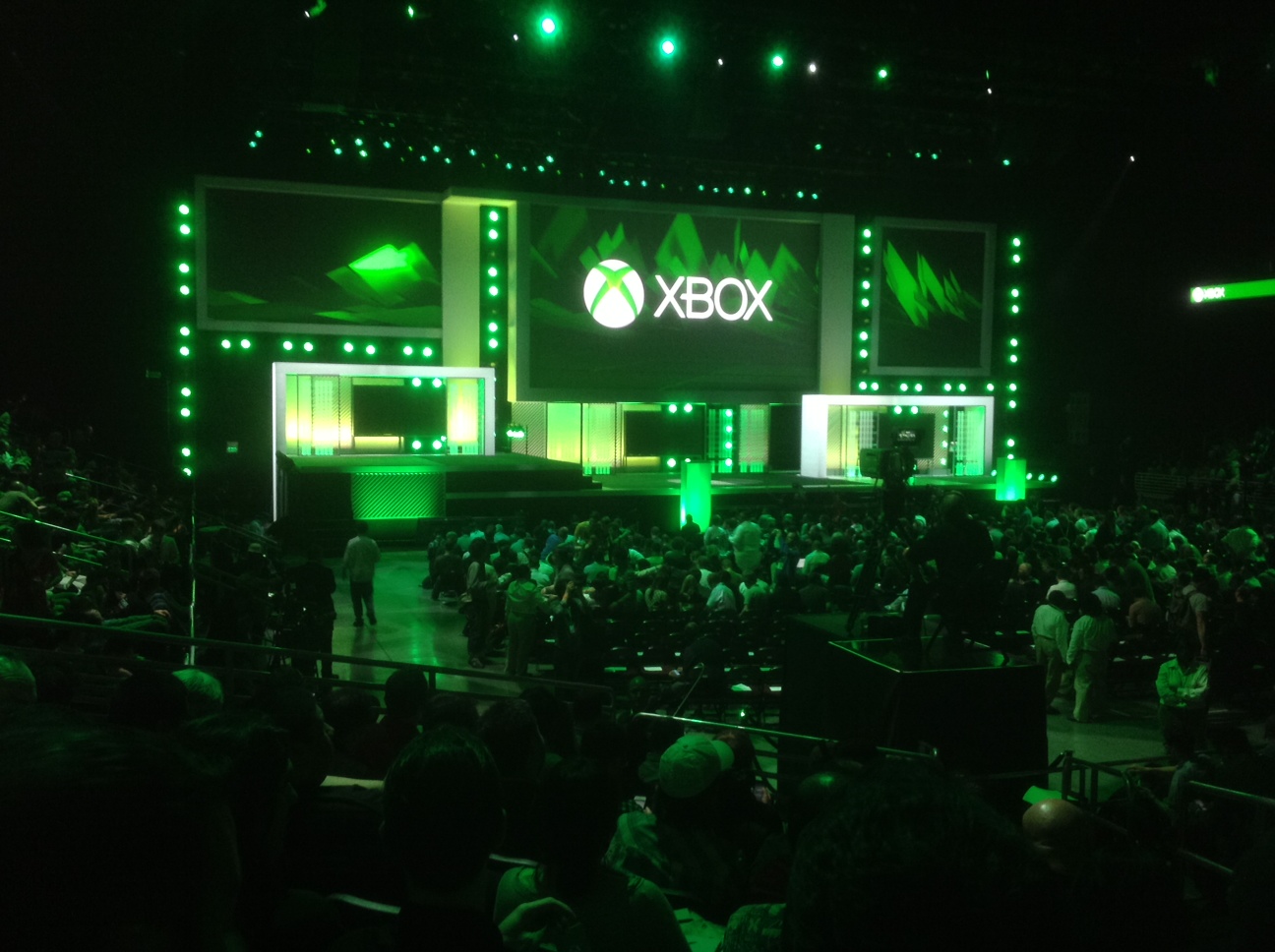 So E3 has begun, and in traditional fashion, Microsoft had their first go of things, with a press conference that focused more on games than anything else.

We all remember that last year’s presentation from Microsoft was a shaky one. The Xbox One console announcement was rife with awful decisions that ended up having a significant impact on consumer perception of the manufacturer.

This year, they opened with assurance that this time around, Microsoft is all about the gamers. And to that end, it wasn’t a disappointment. The conference was a rapid-fire assault on the senses, never breaking stride. Much as it feels strange to say, I think Microsoft really did well, but we’ll have to wait to see how it stacks up against the competition.

The conference opened with Call of Duty: Advanced Warfare. It’s easy to have a strong opinion about the series: you either love it or you hate it. The series has been ailing in my mind (despite its growing sales), growing more and more stale with each installment. This time, the game is set near-future, and it may be the jolt the game needs. Exo-armor and six-legged tanks roam the environment, which looks fantastic.

Despite how great it looks, however, it does seem to have some of the same pitfalls as before. The environment is like four Michael Bay films combined, exploding on a nigh-constant basis. The game is still pretty much a straight line through, though the addition of boosters allows for more verticality in the environment.

Following that major reveal was Forza 5 and Forza Horizon 2. The entire Nürburgring has been meticulously recreated for the Forza 5, and is available now, for free, for everyone that owns the game. Forza Horizon 2 carries on the traditions of the open-world experience, allowing players to traverse a wide city with a complete day/night cycle and dynamic weather systems. The ability to form clubs of drivers up to 1,000 players is a pretty impressive ability, as well, plenty to be excited for in that regard.

In the first announcement that really held my attention, more was revealed about Evolve, the new game by the studio behind Left 4 Dead. Players can take control of a team of four hunters of different classes and abilities in order to hunt down a large and horrifying creature. The twist is that a fifth player is controlling the monster, introducing some much-needed asynchronicity to the team-based TPS genre. Reminds me of Brute Force but, you know, prettier.

Ubisoft kept the momentum going with Assassin’s Creed Unity. While I may not have played an Assassin’s Creed game since the first, I’ve always been a follower, keeping tabs on what’s going on and how it’s growing. This is the first outing that has been built for next-gen consoles, and it looks fantastic.

For the first time, you can form your own brotherhood, as well, meaning that up to four players can participate in ritual slaughter, and this was all displayed live—impressively so. I was particularly impressed with the potential crowd dynamics. Set in Paris during the onset of the French Revolution, as soon as the assassins burst into action, the crowd also flexed their muscles, killing guards and pushing into blocked areas. Check the video out, you won’t regret it. Here’s to hoping they really give you options in how you attack your objectives this time around.

Dragon Age: Inquisition got a trailer that wasn’t crappy like last year’s was.

Insomniac Games also had a great showing with Sunset Overdrive. It’s a third-person shooter set in a city overrun by crazy mutants. Many factions of the city are battling over territory, but you play as a custom hero who seeks to rectify the problem with style. The game has a ton of comic sensibilities, with crazy devices and constant grinding over the environments. The game took more than a few shots at its contemporaries. The game looks smooth as hell, and completely entertaining, without bogging itself down with hard themes and the like.

CAPCOM announced an immediately available multiplayer arcade mode for Dead Rising 3. Take a deep breath for this: Super Ultra Dead Rising 3 Arcade Remix Hyper Edition Ex Plus Nova (an obvious self-jab about the more ridiculous Street Fighter game titles). New abilities based on your costumes and more ridiculousness than ever make for something really intriguing.

The new Fable Legends takes the previous formula and adds more players, giving the series a distinctly MMORPG-like feel by giving more specialized abilities to particular builds, and filling them out like a typical MMO party: tanks, ranged damage support, and that sort of thing. I do believe that Molyneux is no longer a part of the game, take of that what you will. The game retains the look and feel of previous titles, though. The newest feature that drew my interest, much like Evolve did, is that another player can control the villain in an RTS-styled interface. They place the traps and command the creatures in an attempt to prevent the heroes from reaching their goals. This style of multiplayer is something I can really get behind.

A lot of time was spent talking about Halo, which makes total sense. Micrsoft is really going for broke on the Xbox One, bringing all the numbered entries in the Halo series to the Xbox One in their original engines this November. The excitement was palpable as they mentioned that Halo 2‘s multiplayer was being brought on in its original form, with several of the maps being completely redone for the new engine, as well, in case you want an updated experience. The release is meant to set the stage for the upcoming Halo 5: Guardians, by also including a live-action movie experience (with Ridley Scott on board). I’m a little concerned about the necessity for an entire game (and film) to set up the new game, which I feel should stand on its own, but that doesn’t mean it won’t be am impressive experience.

A new Tomb Raider game was also shown. Lara is involved with some kind of psychological treatment after her traumatic experience from the recent reboot. It’s clear that they want to focus on Lara becoming what she was originally known to be, but not a lot of detail other than that was revealed.

The gameplay displayed for The Witcher 3: Wild Hunt  was absolutely impressive. We recently got to see some information about the game at the GOG conference last week, and this only confirmed what we were thinking. It not only looked amazing, but the gameplay was smooth and deliberate. The world is larger than ever, with exceptional detail being payed to every aspect. Just look at it and know that you need to have it.

Ken Lobb is back after rebooting Killer Instinct to revive another beloved Xbox franchise with a new version of Phantom Dust, which had a short showing that was enough to hook you.

The new look at Tom Clancy’s The Division similarly had me as impressed as I was when I first saw the game last year. A virus has been unleashed on New York City on Black Friday. The city is in shambles, and violence runs rampant in the streets. The game already looked beautiful, and this further look was absolutely stunning: everything from the map to objectives seems like it had love poured into it from every angle. Just have a look a t the way the map is projected across the floor, the minimalist UI, everything:

It also looks like tactical gameplay is heavily rewarded, with constant communication required for assessing new threats and keeping your team alive.

The final announcement worth mentioning at the conference was from Platinum Games, a favorite of mine. The game promises more ridiculous over-the-top action than ever. Hideki Kamiya’s influence is heavily at play here, full of snark and really, really huge monsters. It was only a cinematic trailer, but the fact that its also Xbox One exclusive is a big boon for the console, I think.

All in all, the conference was a huge improvement over last year. By focusing on games and not really talking about the hardware or their direction, it removed the negative attention it had previously received, though prying into it makes this a concerning tactic: they’re deflecting attention away, trying to impress us with flashy trailers. That being said, the presenters were on-point, never obnoxious, and there was so little pause that it really flew through. If this is the lowest point the bar is set at, then we have a lot to look forward to.