So, don’t get me started about EVE.

MMO addictions are a very real and present danger for many. Generally, I’m fairly immune to them, they don’t hold my interest long enough to cause problems, but EVE Online was a totally separate beast. The universe is so rich and the gameplay unique enough that I was unable to remove myself without great effort.

Now all my time in New Eden is spent in CCP’s other offerings: the occasional DUST 514 match, or checking out a stream for a particular massive happening in EVE.

At least year’s E3, however, we managed to talk our way into the CCP meeting room upstairs and get a taste of EVE Valkyrie, which was then called EVR. 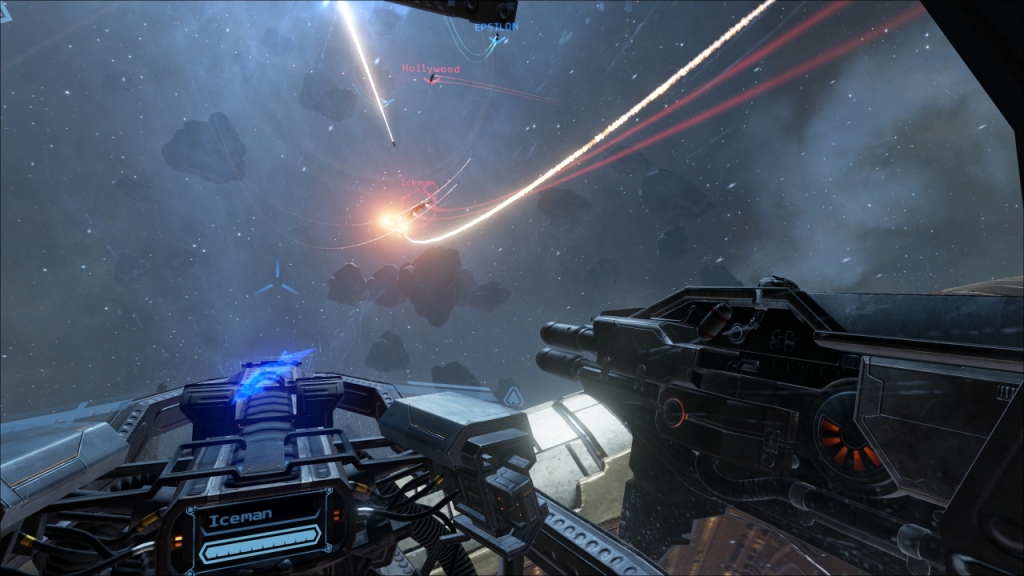 Where EVE Online focuses on massive ships and strategic battles, EVE Valkyrie tasks you with donning an Oculus Rift VR headset and boarding a quick fighter to do battle with another squadron for…various reasons that haven’t really been fleshed out yet.

When we first played the game it was in a very, very basic form. The game was basically being made as a passion project on the side, some of the EVE devs would spend an hour or two a week on it, and it was still really impressive stuff. We knew the game would be improved when we set up a meeting this year, but we were totally unprepared for just how much better it had become.

The defining moment of the experience the first time around came before you’d even launched your fighter. The helpful presenter affixed the Oculus to our eager faces and told us to look left, then right, then up, and—with a hint of smugness—to look down, at which point you saw a modeled body sitting in the seat where your body should be.

Now, CCP is using upgraded equipment, including the newest version of the Oculus, which also includes the use of a separate camera to trap head position in 3D space. Rather than just look down, they have you lean forward, and in the rendered space, you’ll lean over your flight stick to get a full view of the cockpit. It’s an immersive experience quite unlike anything else out there at the moment. 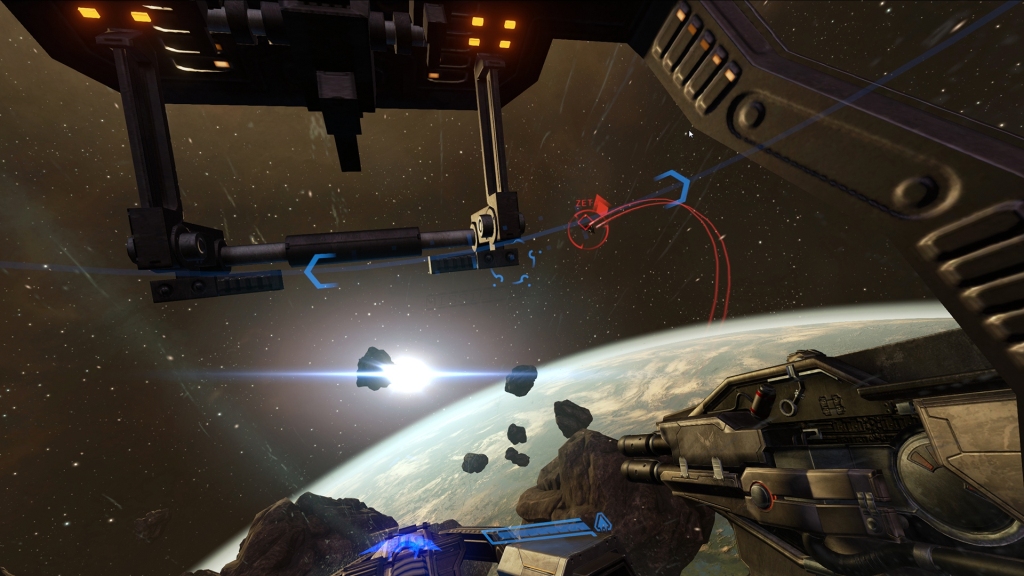 The game features very simple controls, to complement the fact that most people are unused to detaching their head from a fixed point while playing. The left stick controls your acceleration. The right stick controls your facing. Bumpers alter your roll. The face buttons allow for boosting, braking, marking a target, and launching missile countermeasures.

The real draw here is your two different kinds of weapons. The right trigger fires your affixed vulcan cannons—high rate-of-fire weapons that are always aimed down the nose of your ship, while you can get lead indicators on enemies to try to assist in dealing damage with these, but they are definitely not your primary means of dealing damage.

Holding the left trigger engages your missile lock, and the crosshairs are centered in your field of view, no matter where you’re looking. You’ll need to disengage your head from the front of your ship and scan for another ship. Locking your view onto a target starts your missiles spooling, up to five missiles can be loaded to fire, and they’ll spool in faster the closer you keep the ship to the center of your view.

This was the biggest gameplay alteration between EVR and EVE Valkyrie. In EVR, once you got a lock on the ship, it automatically launched a volley of rockets, as opposed to this revolver-esque system.

The devs have been tinkering with the engine, as well, bringing detection improvements and considerable smoothing to the process. The new version is called “Time Warp”, and its biggest accomplishment is an advanced algorithm that can, through some kind of black magic process, predict your motions ahead of time and smooths dramatic motions out, resulting in a far, far higher framerate and clearer vision while doing things like shaking your head or tracking a nearby fighter flying in the opposite direction as yourself. 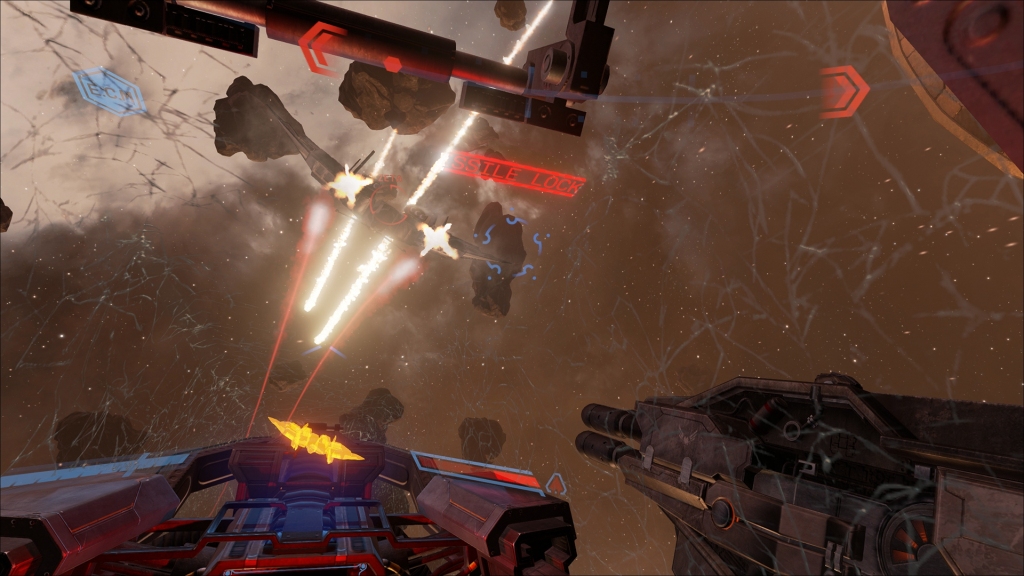 In traditional fashion, the game pays a lot of attention to small details, even in its severely unfinished form (I’d hesitate to call this an alpha, even), but seeing the entire interior of your ship modeled and active at any time is such a far cry from other space combat sims, and it adds a huge amount to the immersion factor.

The aforementioned leaning over your flight stick to see your own body. You can see your vulcan cannons as they fire, watching the ammo belts feed through and the whole thing start to glow as they generate heat. As you take damage, the canopy cracks, pieces start to come loose in the cockpit, sparks fly, and your displays begin to malfunction. Your deaths are accompanied by your canopy flying into your face. 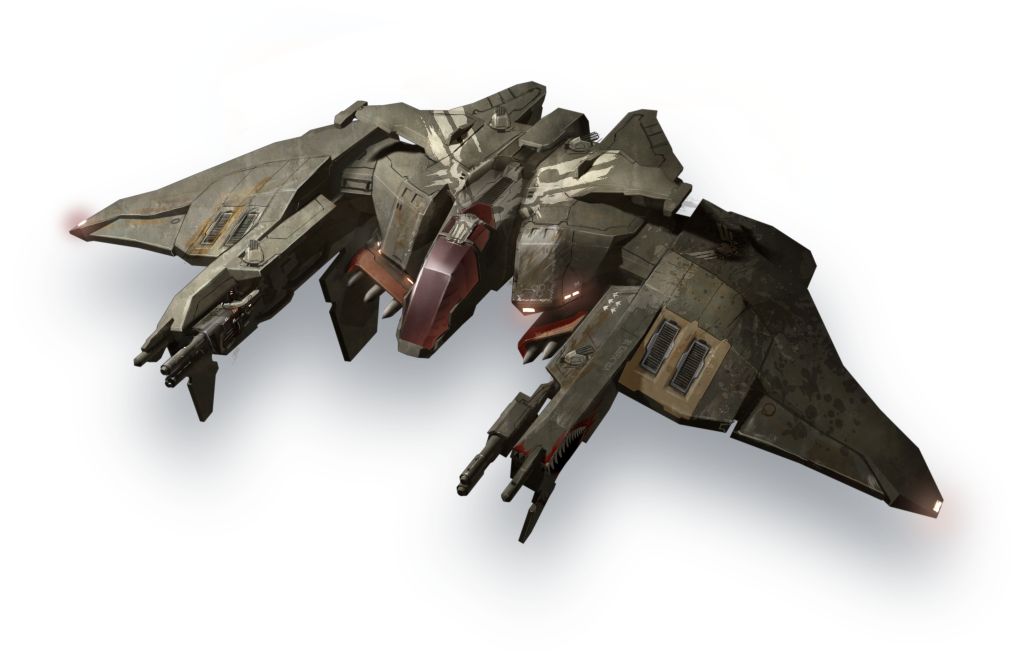 Alongside Dreadnought, I think EVE Valkyrie is probably one of the best games we got to see at E3, the same as the year before. The game possesses considerable potential, though the barrier of entry is fairly high, since it needs a VR headset to function correctly, but if the game proceeds as quickly as it has been and gets fully integrated with the rest of the EVE universe, the triple threat of EVE Online‘s large-scale ship fights and economy with DUST 514‘s ground operations, and EVE Valkyrie‘s small fighter squads could allow for some pretty interesting possbilities. 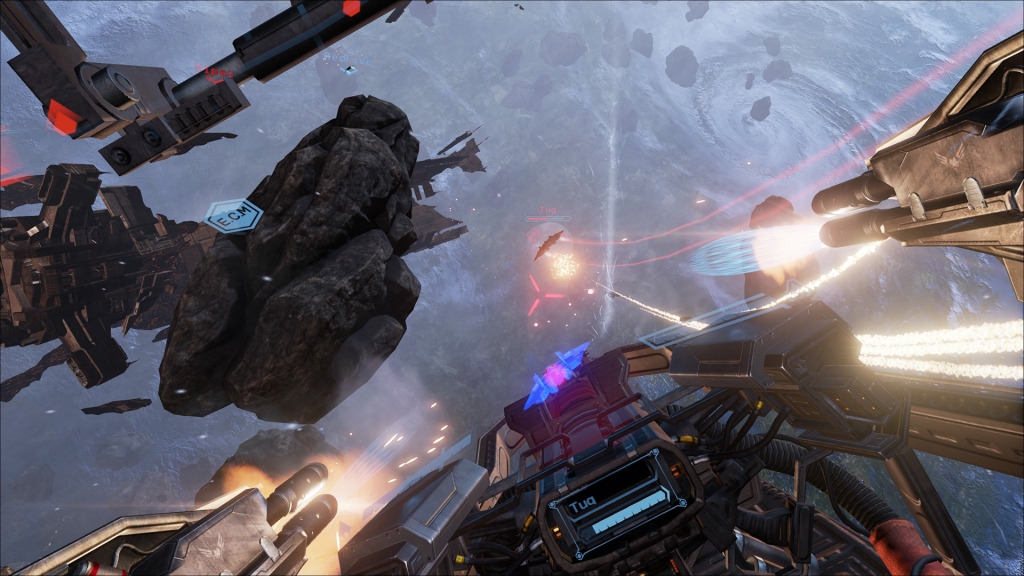 You could contract small groups of fighters to maintain control of certain areas of New Eden, maybe affecting the presence of other pirates or groups in those areas. It would be even cooler to see direct integration, much like how properly equipped ships in EVE can support ground forces with orbital bombardment. If several large ships were fighting each other or battling over an objective and contracted fighters could protect them from other threats it could be some really intense stuff.

So far there aren’t a lot of details as to when the public will be able to experience this for themselves. Looks like the game is due to appear in some form this year, but if you ask me: any amount of time is too long.