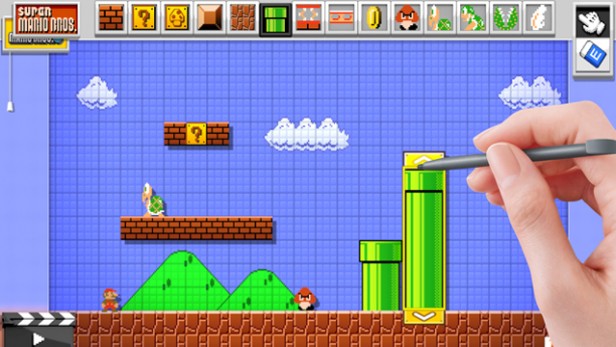 So, Nintendo just announced a new Mario game at this year’s E3. I know what you’re thinking and if your immediate response to the previous sentence was to let out an audible groan, I heartily recommend realizing that, yes, Nintendo uses Mario a lot, but each implementation is almost always different. The company leans on the iconic mascot because it can, but that doesn’t mean it doesn’t innovate or try out new ideas.

Case in point: Mario Maker. The original 2D Super Mario Bros. series is world-renowned and commercially and critically acclaimed for having some of the tightest controls, imaginative settings and memorable soundtracks. There’s a reason it tends to be the de facto standard to which all 2D platforming games are judged. The New Super Mario Bros. series, on the other hand, is often derided for its plain, plastic-like look, memorable-but-not-in-a-good-way soundtrack and a severe lack of difficulty.

It takes a long time to get into the good, challenging levels in these newer games. So much so that fans have often wondered allowed why they have been unable to create and share their own levels with other like-minded players. If you’ve played New Super Mario Bros. U, one of the most fun implementations of the console’s GamePad is the ability to toss platforms on the screen to either help or hinder other players. A small feature to be sure, but it showed just how natural the Wii U’s tablet controller could be used for level creation. 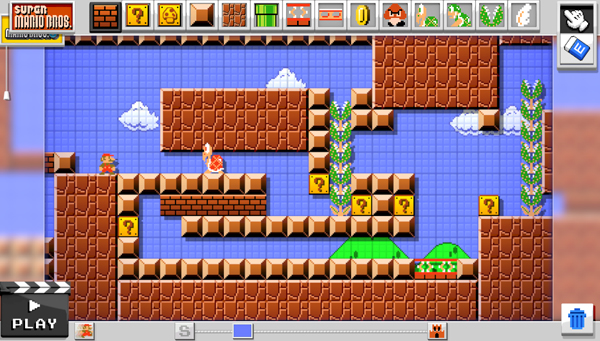 The recently announce Mario Maker is that idea come to fruition. The game is in the very early stages and, so far, it seems tailor-made to be an answer to those hoping for challenging platformers.

Nintendo is finally tapping into the ROM hacking niche. If you haven’t already, do yourself a favor and watch some videos in the Kaizo Mario series on YouTube. All you really need to know is that the levels on display in the series are easily some of the most insanely difficult in the entire 2D platforming genre. They require a level of expertise and knowledge of series mechanics and an absolute love of trial-and-error to be completed.

And trial-and-error is the name of the game in Mario Maker. At this early stage I only had access to some basic blocks, pipes, coins, power-ups, Goombas, Piranha Plants, Koopas, Hammer Bros., trampolines, and moving platforms, but the company has promised more extensive options will be available in the final product. You can use the stylus to shake a green Koopa to make a red one, which operate differently, and you can shake Mario to make him small again. For extra fun, you can add wings to your enemies to give them more interesting path patterns.

To start creating, choose a block and just start drawing on the GamePad. It’s just really that intuitive. Testing out your artistic creation is satisfyingly immediate. Place a platform, enemy or any other obstacle by dragging it via the GamePad and, at the touch of a button, you can play through what you just created. Don’t like it? Was it too easy? Too difficult? Another button press and you’re back in the editor, tinkering to make each placement perfect. You are able to erase objects as you please and there’s also the option to clear the entire screen if what you’ve been making just isn’t working for you.

You can scroll through the level to tackle any particular section you want at any time. And the levels, which are about three-screen lengths, are practically completely blank canvasses, so be prepared to spend some good quality time tweaking things to make your perfect stage. 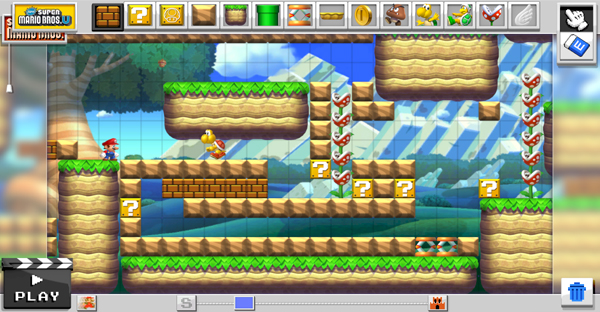 I was only able to play with two styles: the original 8-bit, retro design reminiscent of the very first Super Mario Bros. game, and a more modern design that mimicked the more recent entries in the New Super Mario Bros. series. Note the two screenshots on this page have the same construction, but with different aesthetics. Awesomely, the soundtrack adjusted itself to fit the appropriate design. Both look great and don’t play any differently, sporting the series’ signature physics, but if you aren’t high on either art direction, Nintendo has confirmed that there will eventually be more to choose from.

“Obviously, there will be other graphical styles included,” the game’s producer Takashi Tezuka told USGamer. “And nothing’s been decided yet, but I’d also like to include other graphics that aren’t Mario.” Who knows exactly what that will entail, but Tezuka did clarify that whatever other art styles will be included, the game will always be a 2D side-scrolling platformer, so don’t expect anything mimicking any of The Legend of Zelda’s top-down looks.

Perhaps the coolest part of the game is that, after testing, you’re able to see the path that Mario takes through the level. It’s similar to “ghost” features you might find in a racing game. For those who want to make challenging levels for others, this facet will give you the opportunity to perfectly place certain obstacles to either mess with a player’s flow or require that their movements are pixel-perfect.

And placement doesn’t need to make any sense logically. Stack enemies upon enemies if you want. It was emphasized that there is no such thing as poor placement; every piece is dynamic and works with each other. And, hey, if a particular stretch of your created level is frustrating, that’s part of the fun.

Nintendo hasn’t commented either way on how level-sharing will be done, but at least they’re committed to making it a reality. “Sharing with friends is really the whole point of making levels,” Tezuka said.

Sony’s been doing a wonderful job with Media Molecule’s LittleBigPlanet series, offering a ton of customization options. That series’ community is really its lifeblood as the creativity of its users is what keeps the franchise chugging along. I don’t know if Mario Maker can mimic that. I’m really hoping we’ll be able to see something like this video recreating the “Gutsy Garden Galaxy” track from Super Mario Galaxy in Mario Paint or this video recreating Final Fantasy X‘s “To Zanarkand” in LittleBigPlanet, where we can use the game’s toolset to do things beyond just running and jumping to finish a level.

I want to see creativity blossom here! How much we will be able to do with the final product will really determine how far the game can go. Mario Maker is set to release in the first half of 2015.