Once you fill a portion of a set of bars around your unit indicator, you can begin to split portions of your blob off (or create another mother goo, if you bank your resources for long enough), which correspond in the same way as the light/heavy/epic tier system of the other factions. So by filling a third of the bar, you can create a small blob, which can form immediately into a number of small units, each with different characteristics: standard infantry, anti-armor, ones that can shoot over terrain while remaining out of harm’s way, etc.

The Goo can also garner more resources by absorbing their enemies directly, which is a very visceral and satisfying experience. Just roll your blob over them and watch as their health drops as they’re consumed. I never had a chance to find out, but you may even be able to absorb enemy buildings and reappropriate their assets for yourself. 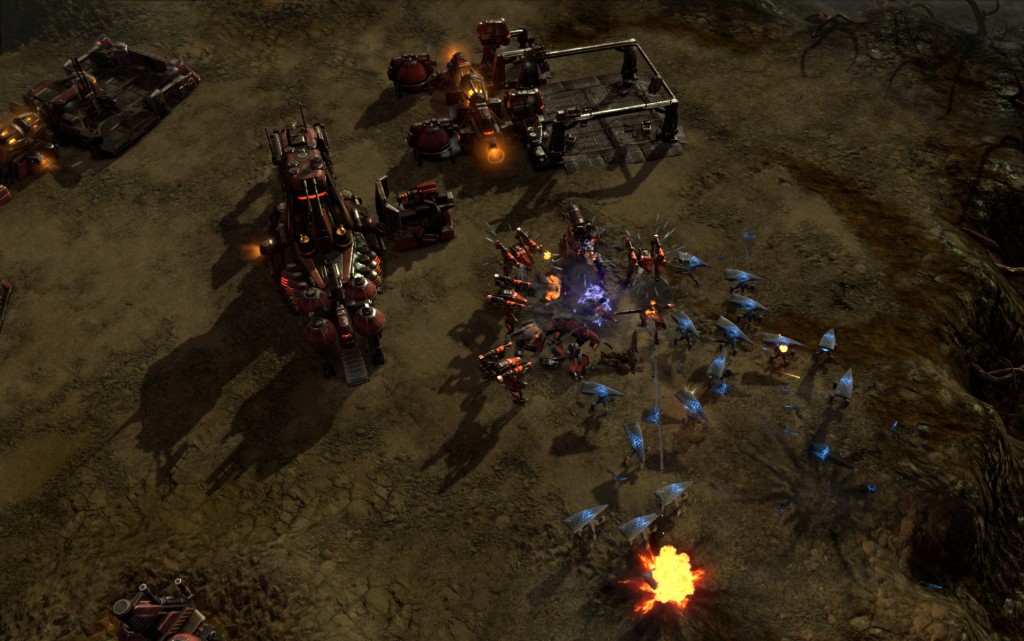 The game’s presentation is as you might expect, an angled top-down camera with a basic point-and-click interface. The environments we were able to see weren’t super diverse, but were well-imagined alien worlds, filled with exotic plant life and set dressing.

The UI is probably the aspect of the game that could use the most tooling with. The organization of units into categories works pretty well, but it can be somewhat difficult to discern costs, and your economic indicators are a little small, and keeping track of them when things get hectic is a chore. Some button toggles, like selling a structure,  need to be selected from a counterintuitive location (upper-right corner) before being utilized, and there’s no simple way to to this from an individual unit or structure.

The game seems to have stepped away from the system of having a unit dedicated to construction, as the Betas air drop structures, and humans teleport them down. So reclamation and collection of resources aren’t relegated to these units either. It does take some getting used to, but the general contruction of the UI is pretty sound, and the simple unit categories make getting to something you need to build in a hurry is quick and easy.

I’ve got a lot of hope for Grey Goo, Petroglyph is a team made of veterans of the strategy gaming space, and the time I spent with the game has me at least convinced that they’re moving in the right direction. We’ll be doing our best to get into the game’s beta tests as things move ahead, so stay tuned for more news. The game will be released for PC through Steam, with Yager aiming for a fall 2014 release date. Check out the trailer for the game below.