During our time at E3, we managed to get our hands on the Petroglyph-developed RTS Grey Goo, a game seeking to bring RTS gaming back to its roots. 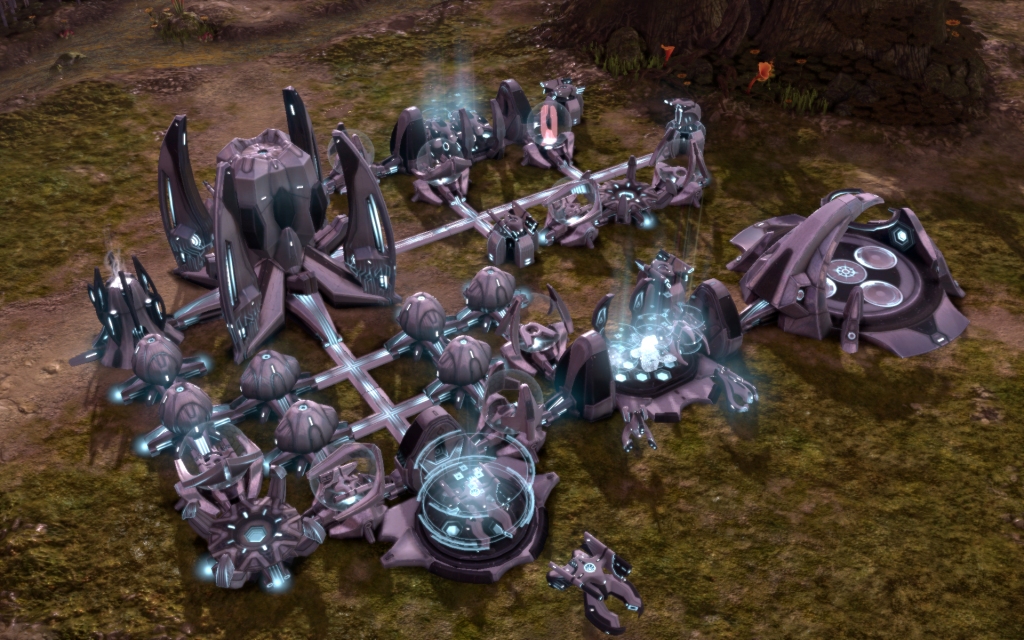 We’ve talked about the game before, but finally got a chance to put our mitts on it, and while I’m not so certain about the “return to roots” ideal that the game supposedly embodies, I did find the game to not only look great, but embody many of the concepts they seemed to be going after, especially once the game gets a little more tuning done.

I managed to try out two of the three factions, opting out of trying the more standard Betas to give the humans and the Goo a go.

My first foray was with the humans. I made some quick chat with the presenter, commenting about how I really liked that the game had thrown out the stereotypical “space marine” aesthetic for the human faction, opting for a more futuristic design. He tells me that as part of the lore, humans figured out interstellar travel and explored various solar systems near the sun. They ended up finding nothing of interest (life form-wise, anyway), and returned to Earth, focusing on improving their technology and leaving that Star Trek-esque sense of exploration behind. 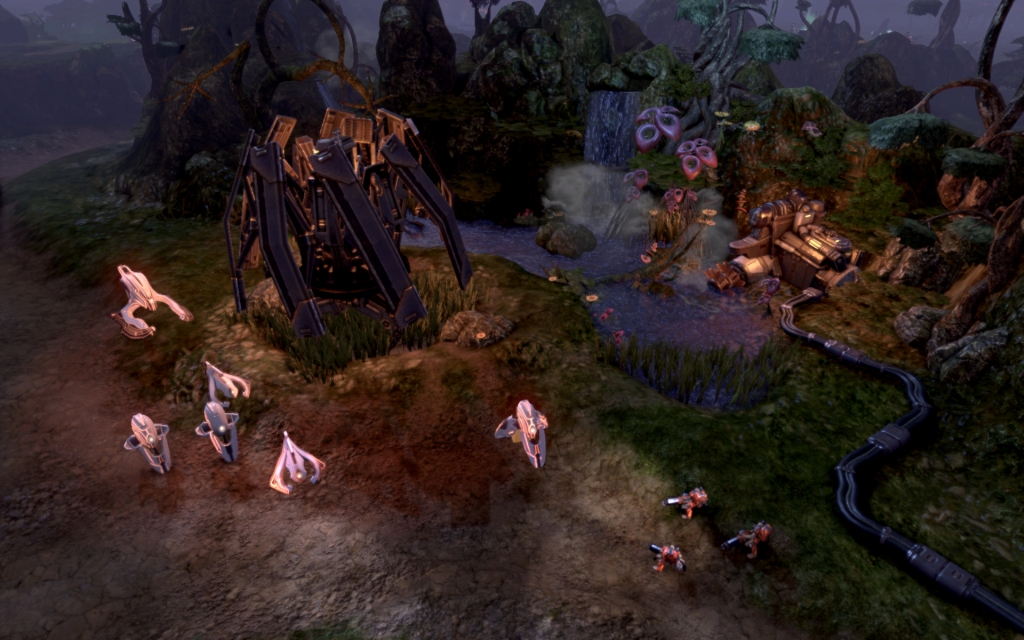 Clearly, this didn’t stick, the Betas are a thing, and the source of the Goo hasn’t been expounded upon of yet. The devs are looking to allow players to play in a wide array of styles, be it aggressive, widely economic, or heavily defensive. While each faction can utilize a variety of tactics, certain races are better designed for this than others.

The humans, for example, are the turtlers. A main building is placed at your spawn point with a small assortment of infantry defense. Every building the humans place has a set of attachment points, and connecting your buildings in a network of conduits is necessary for keeping your buildings working.

I quickly built an refinery, which allows for an extractor to be automatically warped in over a resource point. Economy in Grey Goo is fairly simple, I was only able to discern a single type of resource, but it exists in different concentrations around the map. My extractor, for instance, would pull in eight units per harvester run (harvesters automatically move between the extractor and the refinery), until I found a nearby location with a richer vein, which increased the rate of extraction by fifty percent.  I lay down a few turrets for defense before building a factory.

There isn’t a really huge array of units available to build, generally being organized into light, heavy, and epic tiers with three or four units per category (except for epic). My factory allowed for the production of four units, among them simple infantry (the Trident) and a more anti-armor focused unit (the Revolver). The factory had several attachment points, some of which might be used for more conduits, and others for specialized add-ons that augment production from the factory, like a tank tech component that unlocks tank production at that site. 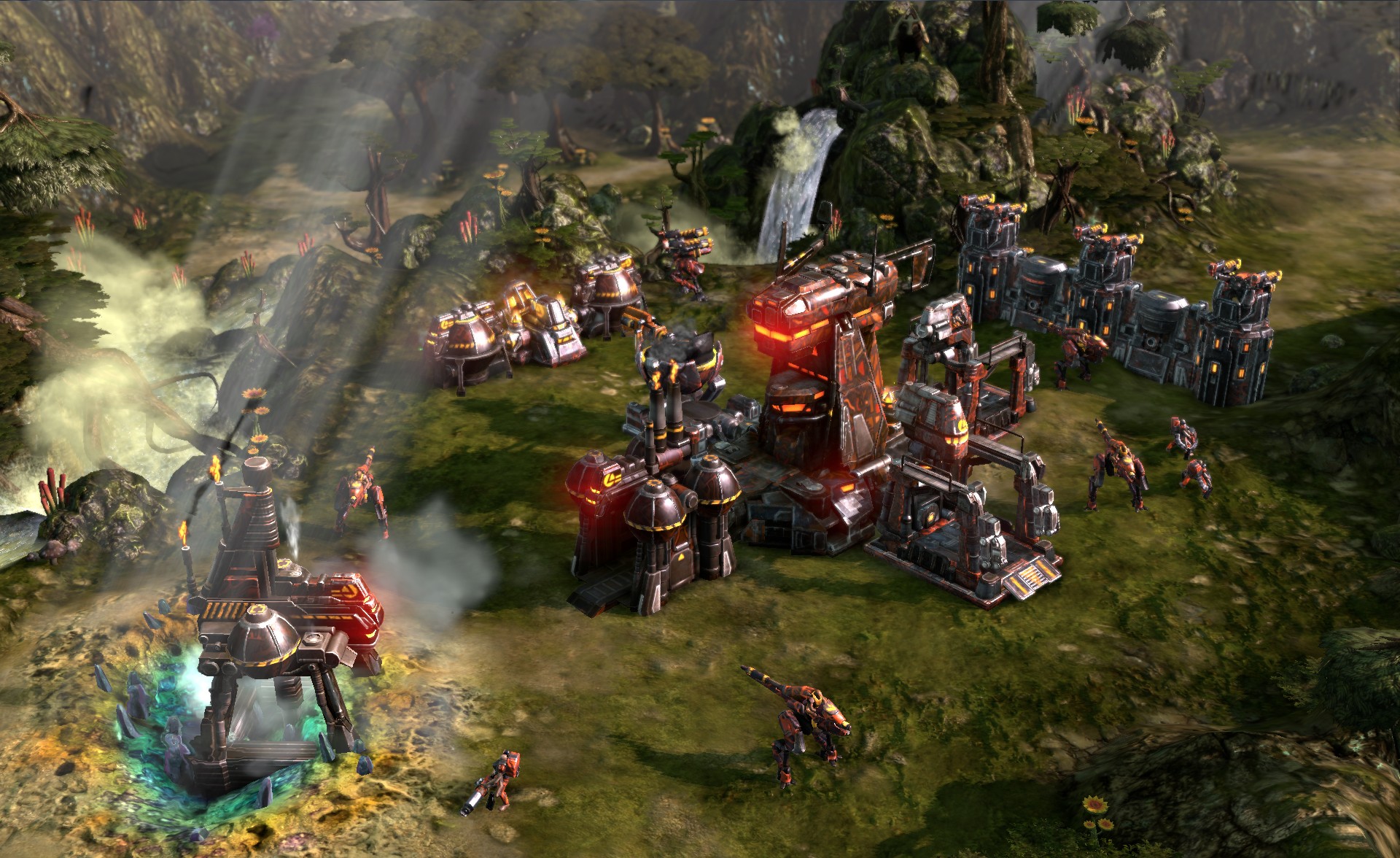 This is where unit specialization rears its head, instead. Each category of units (structures included) have three upgrades to pick from, which can have wide-ranging effects on the units of that type. Extractors can have their efficiency increased, or not require connected conduits to retain power. Once you select one upgrade in a category, however, the others are locked for the duration of the game. These effects are dramatic enough to be widely noticeable, but without completely upsetting game balance, and work well for the tactical versatility Petroglyph is going for.

Economy works much like Supreme Commander‘s does, units have a total resource cost, but that cost is implemented over the time of construction, rather than being spent immediately. The humans have one other major feature that wasn’t yet implemented: as masters of teleportation, humans have the ability to rearrange their bases, which could create large, complex networks and mazes for enemies to crawl through, and could be totally different when they return for another assault.

It should be mentioned at this point that I was wiped out by an incoming Beta force, cutting that portion of the demo a little short. I restarted a game as the Goo, one of the more unique aspects of the game. 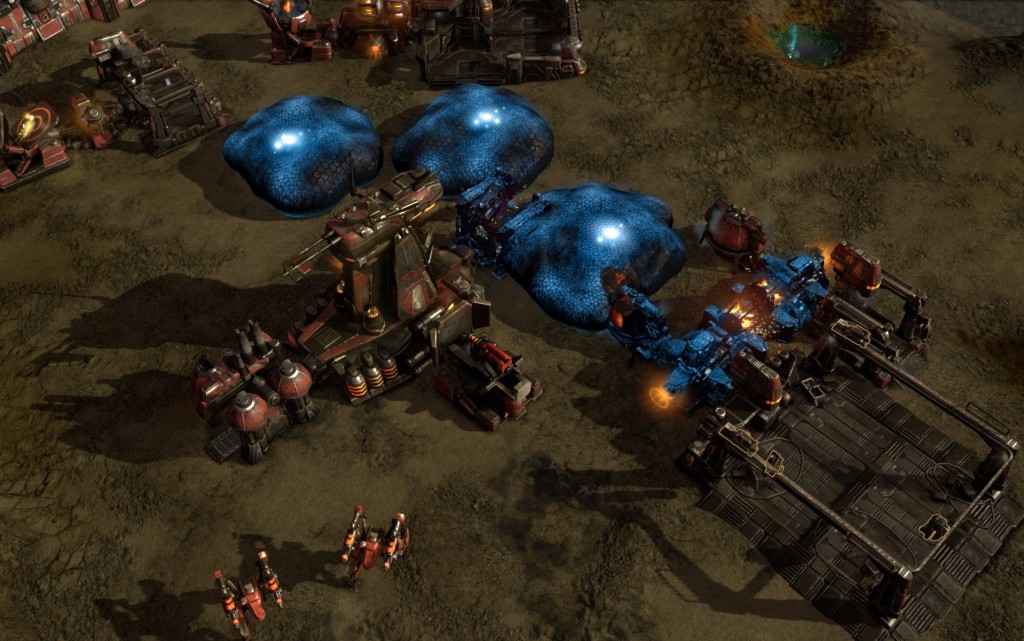 The Goo, as a roving glob of nanomachines, are a completely structureless faction. You start with a single unit, your mother goo. In terms of playstyle, the Goo are a functionally aggressive faction. You don’t need to camp out to collect resources, for instance, just rolling over some resources will trigger their collection, and you can just move on. Terrain is a non-issue, as well, allowing you to waltz around the map without compunction.