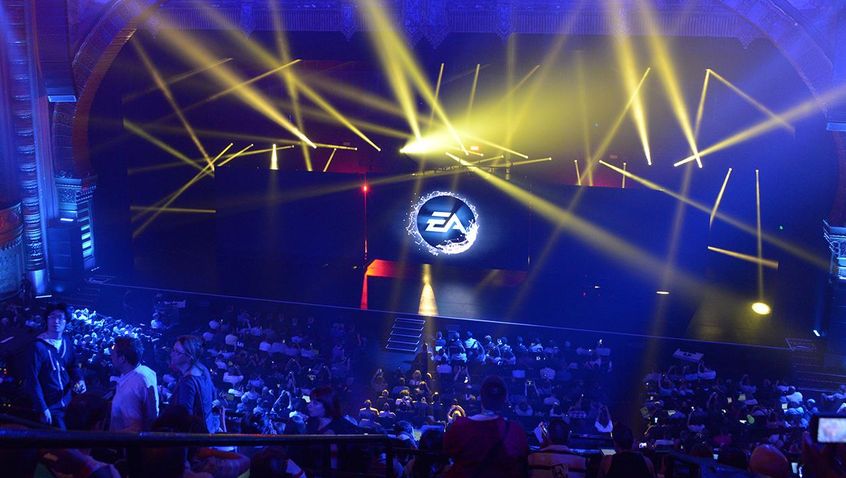 Following hot on the heels of Microsoft’s conference is EA.

EA’s showing last year was a bit of a let down: the presentation was sort of lackluster all around, with some of the more anticipated titles having poor showings, or weak trailers, and even some of the presenters droned on a bit.

They may have fixed the pacing a bit, but all-told, EA’s showing so far didn’t impress on a visceral level, for the most part.

EA opened with some tidbits about Star Wars: Battlefront 3. While little of the actual game was shown, they idea was more to display DICE’s (and by extension, EA’s) dedication to making sure that the game is delivered with a very high level of quality, and is true to the look and feel of the Star Wars universe overall. We got a lot of behind-the-scenes video meant to drum up excitement, but little in  the way of the actual game.

More information was given about Dragon Age: Inquisition than we got at the Microsoft conference. They showed off one of the two major styles of combat: one that allows for a more action-focused methodology. The camera darts between the characters as they fight a massive dragon. The game looks nice enough, but it seemed a little spastic. The tactical version of combat was only briefly touched upon, but functions more like a traditional PC RPG. In the end, another trailer highlighted some of the characters you’ll be meeting in the game, but to be honest, it all felt very heavy-handed—a quick series of brief summaries of fantasy character tropes.

The guys from Bioware talked up some new Mass Effect stuff, as well as a new IP that remains unnamed. Not a lot came through here, it was an obvious effort to coast through on an installed fan base. After all, we already knew that a new Mass Effect was in the works, but other than a few looks at some art and a live environment or two, no details came through. The new IP had no details given besides buzzword-filled promises of dynamic environments.

Oddly enough, this stood in stark contrast to the presentation of The Sims 4, which was unusually impressive. The level of control being given to players over the ways that you can create how your Sim not only looks, but more about their personalities come through and how all these characters fit together to create unique and generally totally out-there scenarios. Rather than focusing more on the day to day happenings, you can see how events from a previous evening and a meeting with an angry old lady created a situation in which a hot-headed Sim tries to overcompensate, eventually throwing a party and affirming himself until another Sim is imported from a new gallery of player-created characters. The new character makes the party so enjoyable, our Sim eventually laughs himself to death. The game has been growing in terms of ridiculousness in recent entries, and this is no exception. I was pleasantly surprised.

While The Sims appeals to one smaller of EA’s audience, one of their primary focuses are on their sports games, and the conference displayed that all proudly. It started with the new UFC. One of the big features is the inclusion of Bruce Lee, the subject of the introduction and the gameplay demo for the game. First off, the game looks fantastic. The game really embodies what I feel is one of the keys of the UFC in general: it’s less about throwing punches wildly, it’s a lot more focused on thought than you might think, and the game is sort of the same: play to your strengths, it’s more about control than damage.

NHL 15 had gameplay revealed, with impressive physics and dynamism. The NHL end of EA’s sports games is one that traditionally keeps growing and getting better, as opposed to the old dip that games like the Madden NFL series experiences back in 2004-2005. The new Madden game, however, actually had me interested in watching (despite my usual feelings to the contrary) by totally revamping defense and making an entire half of the game that’s been generally neglected a lot more interesting. The new PGA Tour game uses the Frostbite 3 engine to deliver a more complete golf experience than ever (and that might be my most ridiculous statement of the day).

Criterion Games showed some very early footage of their new IP (it’s not Burnout, sorry), and I’m not sure how to describe it. It’s basically just a completely ridiculous extreme sports simulator: people leaping out of planes, parachuting down onto a jetski before ramping out and landing on a moving ATV, all from a first-person camera that the player is never removed from. This leads to truly ridiculous views of tricks and transfers, as well as spectacular front-row seats to the inevitable failures therein. The footage shown was incredibly early, though EA was quick to note that they wouldn’t show something in such an infantile form if they didn’t completely believe in it.

Leaping further into a rending genre, EA also gave more details on Dawngate, a MOBA much like League of Legends or DotA 2. They’ve insisted that the game is not just another MOBA, however, it’s an extension of the idea embodied in these games. The game is under constant playtesting and is strictly focused on player interaction. They want your game to be less dictated by what character you play and rather by the composition of your team, for play to be less structured, and more dynamic. At the same time, they want to give players a reason to care: the characters aren’t just faces, but real characters with motivations and goals and personality.

DICE returned after Dawngate to provide more details about the much-anticipated Mirror’s Edge 2. The first game was a sort of underground cult classic, a parkour simulator in a crazy minimalist Big Brother-esque society. They’ve really taken the concept and applied it to the game in all aspects, giving players freedom to move about the environment in a way that feels natural for that player in their current skillset. A skilled player might take a more precise, faster path with less margin for error, while a newer player finds a longer, safer route, ones that are more evident than a complex path might be.

Players are further encouraged to maintain as much awareness of their environment as possible in combat, to use it to their advantage. Despite the fact that its a game more about traversal than fisticuffs, the combat is still as smooth as ever—more so, even. The efficiency of movement is on full display, Faith’s hits are quick and never wasted, momentum is carried through to move between enemies, with critical timing to avoid injury and keep running. This is one of the games I’m most excited for.

Far and away the biggest thing shown by EA, however, was Battlefield Hardline. Plenty of information has come out of various leaks and outfits before, but this is the first we’ve really seen of the game. They showed off the heist mode, which places a group of criminals against a team of police, as the criminals try to extract a package. The game is like PayDay 2 on steroids, the criminals neutralize an armored truck, and fight off a police assault while blasting out the back. What follows is an absolutely ridiculous trek through the city, every time you think one side is garnering an advantage, another player in a vehicle shows up, providing crucial cover, or smashing a roadblock.

The potential here is amazing. I know that there’s this huge divide between Call of Duty players and the Battlefield crowd, but after seeing what Hardline had to offer, I can tell you exactly where my loyalty is going to lie (so long as this turns out to be what the game really does play like). Seeing the different tools and vehicles available to each side made watching the video almost stressful (in a good way), as criminals cruised down highways on motorcycles while policemen in helicopters tried to shoot them down. Some of the video presented reeked of  setpiecing (looking at you crane sequence), but if that really does end up being a component of the game, I’ll go buy a PS4 right now, because there’s a beta for PC and PS4, and I want to get into it.

EA certainly ended on a high note, Battlfield Hardline and Mirror’s Edge 2 both looked great, but their conference as a whole felt kind of subdued, and a lot of the games that I know people were looking forward to didn’t receive nearly as much attention as I’m sure they would have liked. While much of what they showed was of high-quality, my eventual reaction was very subdued. I’ll say that Microsoft’s conference had more going for it, of that we can be sure, but I’m eagerly awaiting Ubisoft and Sony, both of which were the show stealers last year.