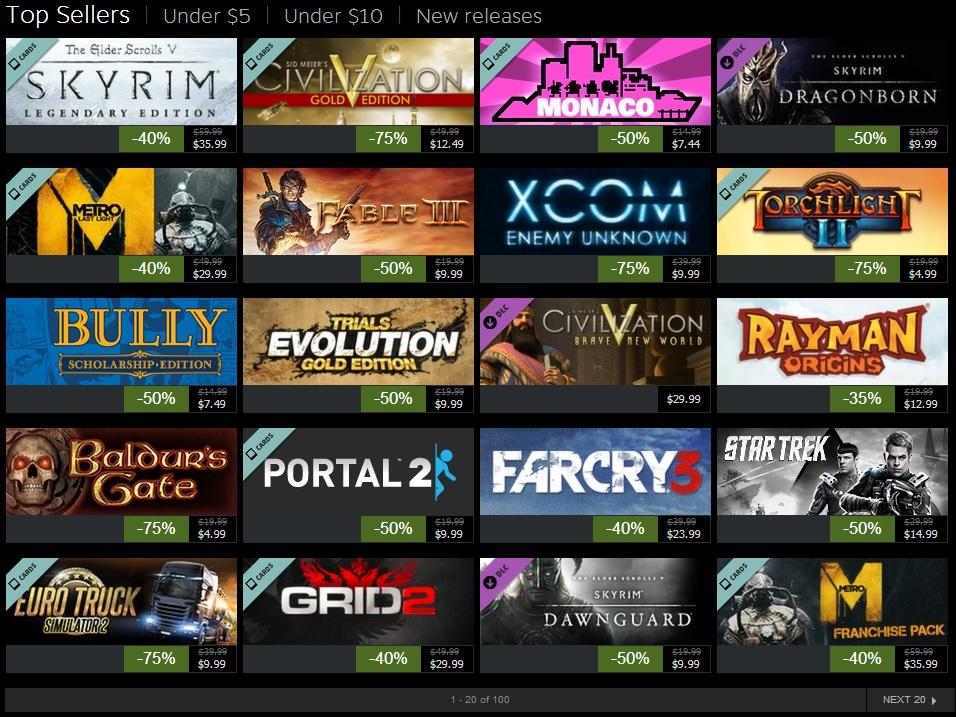 Every year, Steam plays host to a variety of massive sales, where it cuts prices dramatically for some of the biggest and best PC games on the market. When Steam has a event it isn’t you’re average retail affair. We aren’t talking a measly 10 percent savings in which you can find AAA games for $54 instead of $60. When Valve has a sale on games they drop their prices by 50, 60, even 90 percent, allowing those of you who are on a strict budget to secure some of the hottest titles available on the Steam platform.

But Valve isn’t the only company that offers substantial savings, just look at Good Old Games (GOG), another website that offers amazing deals on directly-downloadable PC, Mac, and Linux titles. This website doesn’t receive nearly as much hype as Steam, and it’s chiefly due to the products they sell. GOG controls its own niche, offering up sales on much older titles. This is the place to find savings on the “games that started it all.” If you’re itching to play some classics like System Shock 2, Baldur’s Gate, Sim City, or Myst, this is the best place the go. GOG is home to a vast array of titles, including games that date all the way back to the late 80’s and early 90’s.

The best part about this website is that even those of you without an incredibly powerful computer are pretty much guaranteed the ability to run and play most of these titles at their highest quality settings. It’s important to keep a close eye on GOG and you’ll want to be sure and sign up for email updates, as a lot of their really good sales are very limited and don’t last very long. Recently (December 2013), the company offered a bundle of Fallout, Fallout 2, and Fallout Tactics, for the low, low price of free. This sale only lasted 48-hours though, and prices shot right back up to their normal state as soon as the countdown timer reached zero.

Another awesome, and often overlooked PC game sale-site is The Humble Bundle. This charitable organization may not be as well known (or known at all to some of you) as Steam or GOG, but they offer some of the best deals on Indie Games. Humble Bundle uses a system called “pay what you want” for it’s big bundles and weekly offerings. The PWYW structure allows you toss in whatever you can, ranging from a dollar all the way up to a million dollars, for small bundles of indie games that can either be directly downloaded or unlocked on Steam. Some bundles require you to have Steam, so it’s a good idea download the platform before grabbing any Humble Bundles.

What makes this site beautiful is the fact that you’re receiving huge gaming deals while helping some great charities. Imagine buying six awesome indie games for $5 and feeling great about doing it. The website recently opened a store as well, slashing prices to “Steam-like” levels on some of the bigger and better games out there.

Amazon may not be the first name that comes to mind when you think about digital game downloads, but the retail-outlet has made huge strides in the “direct-download” market. Because of their sheer size and retail power, Amazon has the capacity to offer deals on games that are comparable to both Steam and GOG. In fact, there are many times where Amazon will offer a discount on particular “big name” titles that is better than their competition. For example, when news hit the airwaves that the anticipated Just Cause 2 multiplayer mod was releasing, many interested gamers had to clamber to find copies of the original Just Cause 2 title. Steam offered the “older” game for $20.00, while Amazon managed to slash the price to $15.00. Amazon also runs a variety of “daily and hourly deals,” and digital game downloads make their way into these events from time to time.

This last one is for all you gamers out there who play on both PC and console. Gamefly has become an invaluable tool, allowing me to play anything and everything without having to drop $60 per title. Unless you’ve recently hit the lottery, chances are you can’t afford absolutely every game you want. Especially if you play PC, because unfortunately we haven’t yet made it into an era in which PC games somehow become a rentable commodity. But if you’re interested in playing some older PC games, Gamefly now offers something called “unlimited PC play.” This specialized part of the website gives you access to a ton of older games that you can download directly to your PC for free.

For anyone unfamiliar, Gamefly uses a subscription-service to offer their goods, much like Netflix. It’s going to cost you around $15 a month, which is a steal considering you’re getting access rental access to the hottest games for current and next-gen consoles, plus a plethora of PC titles.

While not as popular as the aforementioned the two serviced below both offer good deals on games from time to time. It’s best to keep an eye on aggregator sites like cheapshark for any deals across these.

So there you have it, some great places to catch some seriously good PC gaming deals. Now if only the console world would start offering me some amazing deals. Until then, I’m stuck trading in my $60 games for $5 at GameStop.