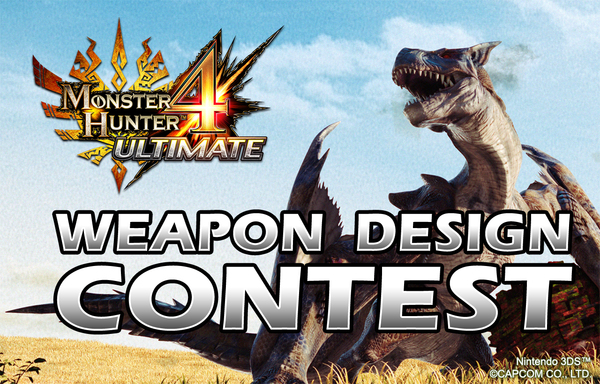 Do you fancy yourself an artist? Do you have any interest in partaking in a small, but really cool facet of video game design? Well, Capcom is hoping to get the community involved with a contest tied to its creature-slaying Monster Hunter franchise.

Monster Hunter 4 is the insanely popular Japanese 3DS game released last year (it sold 3.9 million copies in only three and a half months and in only Japan), but sadly, we won’t see its expanded and improved version, Monster Hunter 4 Ultimate, release stateside until sometime next year.

Since its release is so far off, Capcom is naturally attempting to drum up and maintain interest in the would-be handheld blockbuster game. Yuri Lindbergh, Capcom Unity’s Community Specialist has announced the Monster Hunter 4 Ultimate Weapon Design Contest. It is exactly what it sounds like: the contest tasks you with designing and naming a weapon that will be featured in the game.

The Monster Hunter series prides itself on weapon variety, but expectedly, whatever you design must fit into the classes and aesthetics inherent to the game.  No futuristic, game-breaking laser guns here! Instead, your original weapon should be based on one of the 14 weapon classes available: Sword & Shield, Dual Blades, Great Sword, Long Sword, Hammer, Hunting Horn, Lance, Gunlance, Switch Axe, Light Bowgun, Heavy Bowgun, Bow, Insect Glaive and Charge Blade.

Only one entry per person will be accepted. You also have to be at least 18 years old to participate.

To enter, email an illustration of your original weapon along with its name to contest@capcom.com, using the subject line MH4U WEAPON DESIGN. You also have the freedom of adding a short description, under 100 words, to help Capcom understand your concept, though this is not necessary to participate.

Winners will receive an as-yet-undisclosed digital prize worth, well, nothing. Monetarily, anyways. Pride and bragging rights, though? That’s priceless.

The contest closes at 9:00am PST on May 5th. Check here for complete terms and conditions.