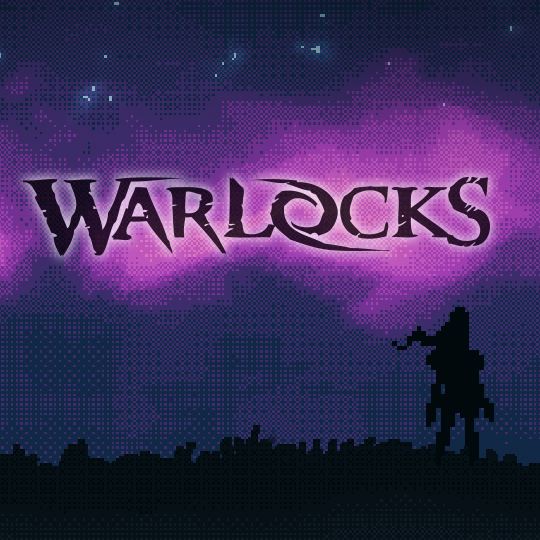 There exist outside this dimension many others with their own unique and fundamental characteristics. There is one dimension, however, where there exist no people, only evil shadows. Now, in Warlocks, these shadows are invading other realms, and it’s up to you as a warlock to travel to the other worlds to stem the source of this evil and recruit allies to your cause.

The result of this is a multiplayer wizard brawler that tasks you with taking control of a variety of quirky and unique characters in a slick, side-scrolling game packed with action and flashy abilities. I had a chance to speak with some of the team and was impressed with their passion about the game and how “together’ everything seems to feel, a unique trait for games that aren’t as far along in the process yet.

A cursory glance at the game would seem pretty simple: dark monsters attack, you attack back with a set of abilities based on your current warlock, repeat. We’ve seen the formula before in old-school action RPGs or more modern games like Shank. Warlocks, however, includes a number of inspirations from other genres that come together to form an experience that looks fresh while feeling familiar, all wrapped in a package that screams of sensibility.

The shadows invading the human worlds are spreading a deadly virus throughout the multiverse, necessitating action by powerful inhabitants of vastly different realms to contain the infection and eliminate the shadow threat. At first, you can play only as a single surviving warlock, traveling to other worlds to gain allies for your cause. The virus appears to feed off inherent magical abilities, however, and has corrupted the other mages. Their awesome magical powers have created intensely powerful shadows for you to fight, but you will free the warlock within from their influence if you can defeat them, you’ll unlock a new character for future playthroughs, as well. 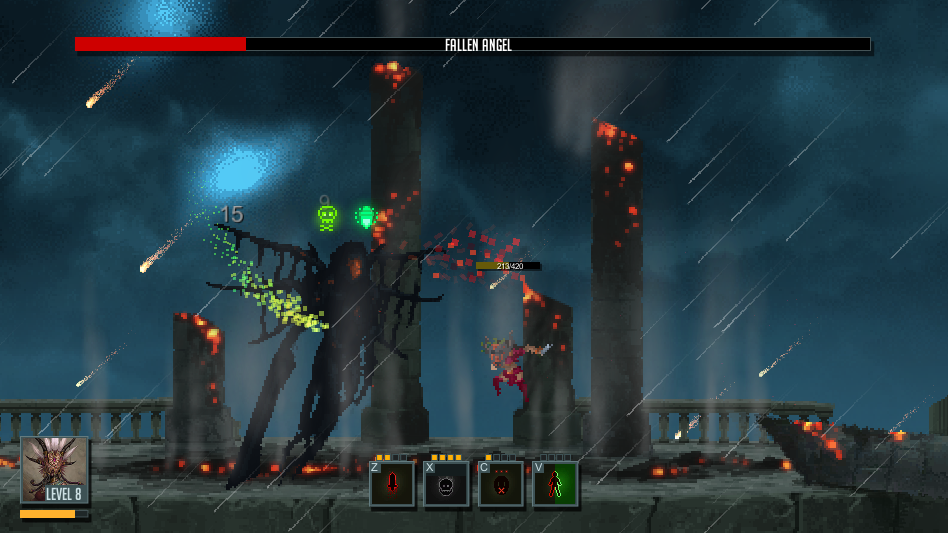 In all, there are planned to be ten different warlocks, all with four primary abilities (a very MOBA-esque move) and a number of combos and other quirks to make each warlock feel different and fit a unique role, should you decide to bring some friends (or foes) along for the ride. So far, there’s no real specifics on these warlocks, but just as each world has its own vibe, each character suits that theme and brings that vibe through in their combat. While one might have a fairly generic almost Contra-esque abilities (triple spread shot, short-range shotgun spell, etc), another appears to bring a robot that they ride into combat with awesome shields, dash attacks, and a full arsenal to boot. The pyromancer brings flame-based spells to bear, including a move called the Annihilation Dance in which he literally moonwalks meteorites to the planet’s surface. The shamaness occupies a sort of support role at first, but can transform into an otherwordly beast to better combat enemies as she grows. As all the characters are so different, the key is to discover how your abilities can flow into each other and utilize those combinations for the greatest effect.

In this way does the game bring in its fighting game influences. As opposed to a larger-scale MOBA-style combat, the game features a distinctly more direct-competition theme: up to four warlocks locked in combat in a relatively limited space. No lane control, no dealing with external forces, just you and your enemies to the death. Add to this your Rage bar, which fills as you fight and can be used to enhance abilities or unleash super-powerful attacks when its full, much like super meters in popular fighting games. You’ll be leaping around arenas, flinging spells at mach speed, to prove you’re the greatest warlock in not just your dimension, but all others.

That’s not to say it’s all about destroying others, however. The aforementioned story can also be played by up to four players with online or locally (though the logistics of four players on one keyboard sounds…tricky). I have deduced through various means that the game does include gamepad support, so in case keyboard controls for platformer/fighting/MOBA hybrids isn’t quite your bag, you won’t be left in the cold.

There’s plenty beyond these modes to keep people coming back to the game. In addition to unlocking multiple characters, finishing the game will unlock a new “Hardcore” mode—which is required to unlock the, in the developer’s words, “ final (and coolest) character”. Running through the story will also yield a variety of procedurally-generated items that can alter your warlock’s stats: increasing damage, reducing cooldowns, or enhancing mobility (or so I assume, so far, no flavor text appears to be included in the game). Some of the newer shots include some HUD elements that also indicate that your character levels up as they go (enhancing skills, damage, and health, I imagine), as well as a dollar amount that is thus far unexplained. 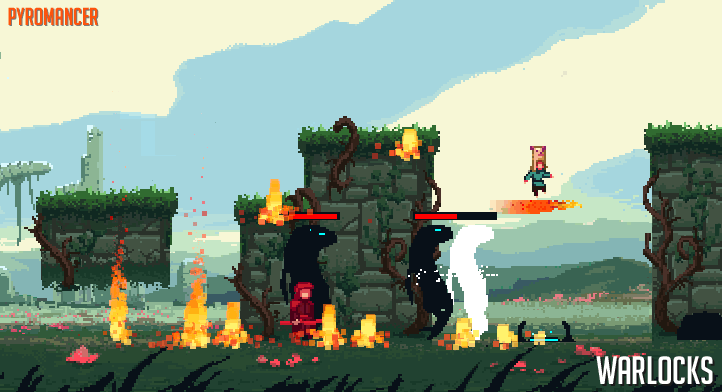 All these features are wrapped in a rather impressive pixel style that I was truly taken by when I first saw it. It’s become so commonplace for indie games to utilize older 8- and 16-bit looks as both a means to appeal to the nostalgic gamers, as well as save time and money on art and assets. That being said, none of the information I dug up on Warlocks made any mention of the art style—it simply was what it was. At the same time, it’s quite possibly one of the only games I’ve seen in recent memory that truly embodies the idea of the modern-retro look. While the characters and creatures themselves are decidedly Super Nintendo-looking, it’s presented in a very smooth manner that still feels as though it was something that the systems of old would be unable to replicate with any kind of efficiency. The colors are bright when they need to be bright, and dark when they should be. The shadows, while not intrinsically unique conceptually, feel menacing and genuinely dangerous at times. It’s also quite cool to see the ways that the shadows are actually corrupted forms of the characters they control, and that you unlock by defeating them.

Warlocks appeared fairly recently on Steam Greenlight, being posted in May. it’s clear, though, that a lot of love has been put into the game over that time—information has trickled out gradually enough to really dredge up some excitement. The best news is that the game has cleared the Greenlight, so we’ll be seeing it on Steam with what I can only hope is soon-ness. That’s a word, right? 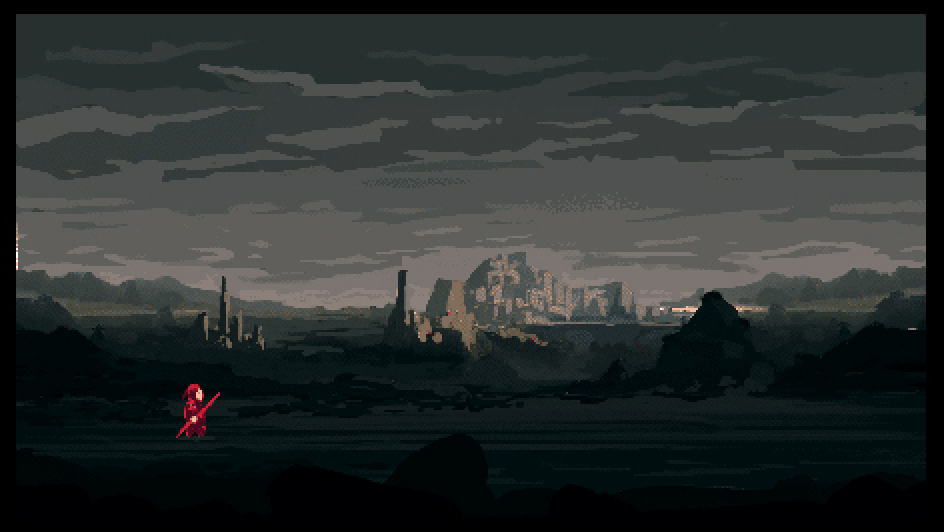 Anyways, I’m keeping in touch with the devs and will try to get my hands on a build as soon as they feel comfortable letting it out into the wild. I remain optimistic in this case—the game derives much inspiration from Risk of Rain, a multiplayer platformer roguelike that I also rather enjoyed (and still enjoy from time to time), and more games like that can certainly not be a bad thing. For now, it’s only planned for PC, but the devs are hoping they can get proper testing for Mac, as well, just in case. No word on release yet, but keep your eyes here for details as they come.