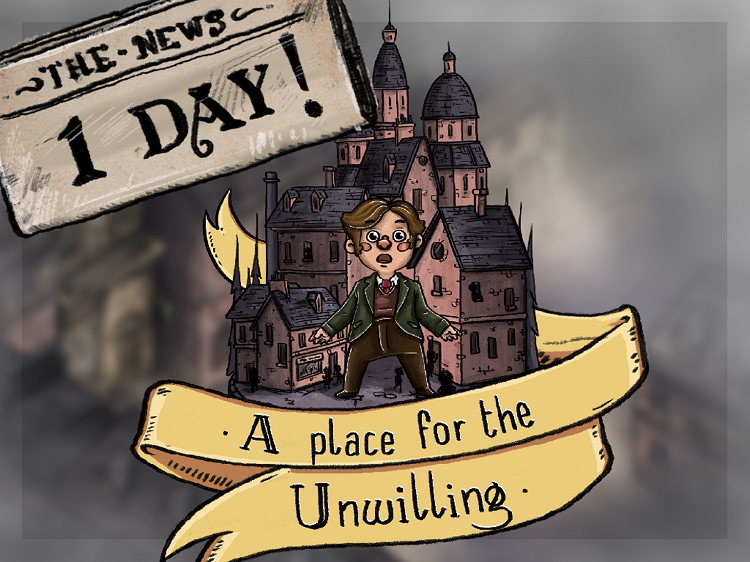 As gamers, we live for adventure. Each time we fire up our console or PC, we dive headfirst into storylines filled with imagination and suspense. We pick up our weapons and drudge through countless enemies, always on a quest for something. Whether it’s treasure, the defeat of a powerful villain, a lost civilization, or something else heroic, we’re always fighting for something. But what if there was nothing to fight for? What if there were no enemies to vanquish? This is the question posed by A Place for the Unwilling, an upcoming indie release from developer MadeInSpain Games. In this release, you’ll play not as an extravagant hero, but as a character that seems no different than the NPCs that surround him.

A Place for the Unwilling is set in a mysterious city. Quirky individuals rest among the streets as a melancholy mist stretches wide across the urban landscape. The city itself is macabre in appearance, featuring dark tones and an almost Gothic styling. The city itself seems depressed in a way, and according to developers, it’s entirely possible for the complex domain to have and experience feelings. The city is alive, crawling with historical wisdom and the hustle and bustle of urban living. It started out small, a town of many familiar faces. But as time prattled on, those who knew one another so well now lay adrift in a sea of people. These pioneers are cast in shadow, but their humanity is not lost. If you manage to learn about them, utter their name, strike up conversation with them, the shadow will melt from the air and unveil the individual trapped beneath.

This is the premise of A Place for the Unwilling. No swords, no vile creatures, not long-winded quests across vast worlds. Just a large urban locale filled with beautiful visuals and encapsulated in a curious mystery. No one is pushing you to save the world or pressuring you to do things in a specific way. Although, it is important to note that A Place for the Unwilling does nudge at you a little bit with a time restriction. Think of it like The Legend of Zelda: Majora’s Mask, or Dead Rising, in which you only have a certain amount of time each day to do the things you wish to do. But that’s where the urgency seemingly ends. There are no quest markers, there is no mini-map, or complex HUD. Developers wanted to craft a release that gave you as much immersion as possible, and there is absolutely no hand-holding to be seen in this title. You’re left to your own devices, and it’s up to you to make all of the decisions necessary to unravel the mystery of A Place for the Unwilling.

Gameplay features a simple movement system with a semi-top-down camera angle that is similar to old school Legend of Zelda releases. You can use items, access an inventory, and even examine specific things. You’ll have to use all of these commands in order to unlock patrons from dark shadows, and a lot of the gameplay elements for A Place for the Unwilling possess a puzzle-like nature. Unfortunately, living in the city isn’t free; in fact, it’s actually quite expensive. To ensure you can continue your journey and that you don’t end up homeless, you’ll need to find yourself a job. Balancing your time between work and discovery is the key to success, giving this release a little bit of a side challenge and a better sense of immersion. You aren’t just here to uncover the mystery of the living cityscape — you’re also part of it.

A Place for the Unwilling has already received funding on Kickstarter and is currently under development. If you’re interested in getting more information regarding this release, be sure to check out the developer website here. Hopefully, MadeInSpain Games will be able to fully realize this unique and mysterious vision, as it has great potential to be a future indie smash hit.

Tags: A Place for the Unwilling, indie, Mystery, puzzle