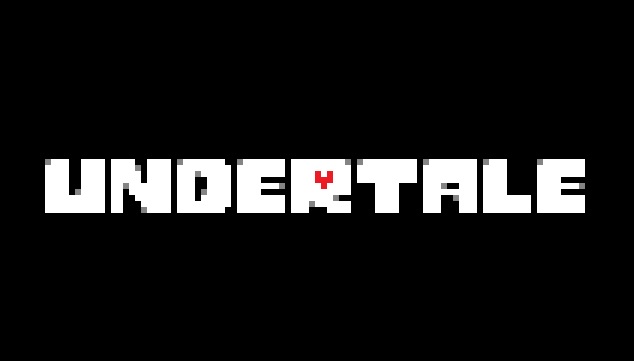 Take a moment to think about the last game you played. Chances are it featured some kind of combat system or employed a storyline that focused on the struggle between good and evil. You probably found yourself wading through hordes of enemies or striking down powerful creatures on a high-stakes quest. Enemy troops, powerful monsters, and disgusting abominations. These are all things that gamers destroy on a regular basis. But have you ever really stopped to think about the repercussions of your actions, and how violence is affecting the game world around you? Most likely not, because many of the games we play have you slashing and slaughtering through levels with a carefree attitude. There is no consequence to the bloodshed. Only a goal. It’s a “me or them” attitude that’s required, and it has been adopted across games for decades now.

So what happens when a title comes along that completely changes the way we view death and destruction within a game world? Undertale, an Indie release by developer Toby Fox, answers that question in a fashion that can’t help but shock on a visceral level. You’ll play as a human girl who finds herself transported to a realm teeming with monsters and curious creatures. The prospect seems scary in its own right: a child-like character forced to tiptoe her way through a dangerous world. But Undertale is nothing like the norm. These may be monsters — but that doesn’t mean they’re hostile and it doesn’t mean they want to snack on our protagonist. As you make your way through the world of Undertale, you soon realize that the colorful creatures around you act more like humans than anything else. Joking with one another, walking together, talking together. The monsters in this realm seem peaceful, and it doesn’t take long to see them as (most) humans see each other. They’re simply trying to survive, to make the best of their situations. They just want to live a normal, happy, dream-filled life, like anyone else. 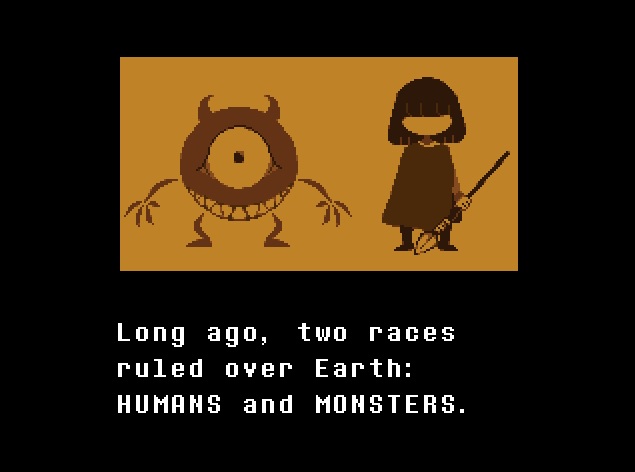 As everyone knows, life has conflict and, at different moments in time, we are faced with problems. These humble monsters are no different. Some of them may seem emotional or prideful, while others are simply bullies. Whatever their reasons, you will find yourself in contact with creatures that you’re forced to fight. Some of these baddies may want to destroy you, while others may reluctantly defend themselves against you. When faced with this action, you’ll be given the immediate option to simply bludgeon your foe to death by employing a vast array of weapons that can be found throughout Undertale. You break bones first and ask questions later. The best part, is you’ll be rewarded for it. Sending the enemy into the oblivion will give you cash and experience, which you can use to purchase better items and grow stronger. As you gain strength, you’ll notice how easy it becomes to run through your foes. It makes the experience so much easier, and it makes you feel so powerful to strike down a malicious-looking monster in a matter of seconds.

This is the usual experience in games. Kill, grow stronger, kill, get better, kill quicker, and progress faster. Individuals on the outside looking in would have a hard time pairing the words “gamer” and “pacifist” together, but we all know that in most releases we have no choice over our actions. Some titles dare to go above and beyond the simplistic prospect of “eat or be eaten.” Metal Gear Solid 2 introduced us to an interesting weapon called the Tranquilizer Gun. With this tool, we were free to make a choice. Do we pull our rifles from our backs and run headlong into a firefight, eliminating lives as we move? Or do we simply incapacitate the enemy and make our way past him? It wasn’t that Metal Gear Solid 2 gave us a new and exciting way to experience the game, but rather that is gave us a choice. It gave us the freedom to decide between violence and pacifism. It isn’t just Kojima, either. Titles like Fallout 3, Mirror’s Edge, Dishonored, and even Postal 2 (a game known for being overly violent) allow players to progress the entire release without the need to take life from their enemies. 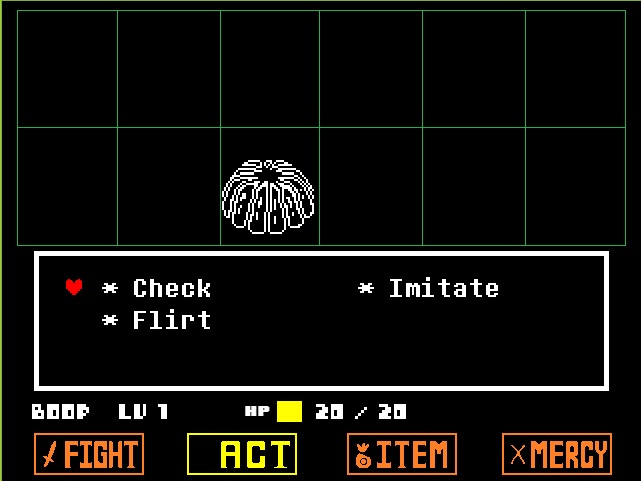 This type of pacifist gameplay may seem gimmicky at first, as nothing more than a new style in which to play. It may be more rewarding to sneak your way through a particular part of a release than it is to run in guns blazing. But imagine for a moment that the act of pacifism actually has an effect on the world around you. The enemies that you spare aren’t just pixelated blobs on a screen. They’re living, breathing entities that have dreams, hopes, and desires. They feel just as you do. They experience pain, emotional distress, and even excitement. They understand what mercy is, they comprehend what death is. In these moments, it becomes much harder to take the life of an enemy, regardless of their appearance. You can visualize them with families, you can see them heading home after a long day to relax, or waking up in the morning excited and with aspirations of their own. It may seem silly to put these types of things into perspective; after all, it’s only a game and the enemies don’t actually tell you how they feel about their own mortality. But what if they did?

In Undertale, violence breeds consequence. At moments throughout the game, you’ll be reminded that the enemies you choose to strike down are more than just pixels. You’ll be forced to realize that the foes you strike down aren’t simply waiting to respawn and attack you around the next corner. They’re gone, permanently. Their character model, their speech, their mannerisms — all of it vanishes in a fleeting moment. Undertale does an amazing job of reminding us that in a real-world situation, no one has the luxury of using an extra life or jumping back into the fight. When a life is taken, it ends. period. This is the chilling prospect that we cheerfully escape in video games. There is no escaping mortality in Underworld, but there is a way to avoid it. Each fight gives you options to interact in different ways with your enemy. This may mean giving a loving pet to a monstrous-looking hound, or talking sweetly to a troubled demon. Certain methods work better than others, and each and every battle can be diffused without the need for senseless violence. But pacifism doesn’t come without sacrifice. Your journey may be seriously slowed should you choose to remain a peacemaker. You may be endlessly frustrated and replay certain battles over and over. In these moments you may be tempted, knowing that one simple attack could topple your foe and reward you with victory. Ending a battle peacefully will give you cash, but not experience, meaning you never have an opportunity to grow stronger. As you progress further into the game and face more fearsome foes, you’ll seem weak and fragile. 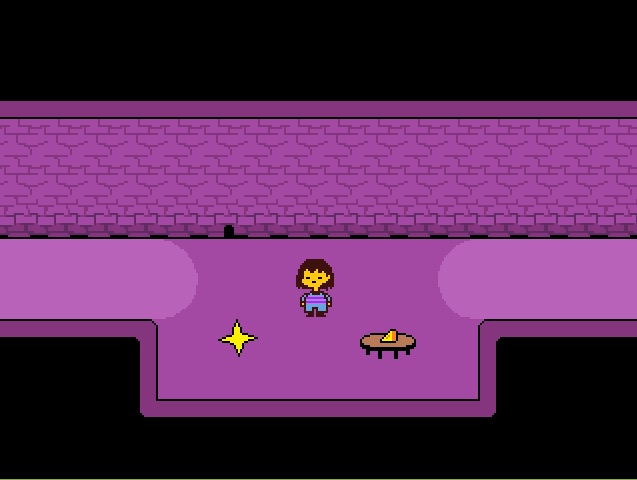 Undertale employs a unique combat system. Each fight looks like something out of Dragon Quest, where enemies are presented to you in two-dimensional fashion and a series of menus offer attacks and actions you may take. When an enemy attacks you, a small “mini game” starts in which you must use your mouse to avoid enemy attacks in a small box located at the bottom of the screen. This may mean dodging muscular, flexing arms, or navigating your heart icon through a series of monstrous tears. If you fail to navigate the attack gauntlet, you’ll lose a hit point. This doesn’t seem like such a big deal in the beginning, and you may find yourself easily mastering the mini-game labyrinth. But as time presses on, the attacks of your foes become stronger and less predictable. It is in these moments that the pacifist path seems so daunting and difficult. Playing the dove means you can’t grow stronger, and you can’t gain more health. There are so many opportunities to move the mouse slightly to the left and click the attack button. So many opportunities to end an annoying battle in a matter of seconds, without much effort.

You won’t be punished, you won’t be given a stern warning, or see a finger wagging in disapproval. You’ll simply move on. You’ll progress through the game like nothing ever happened should you choose to actually take the life of an enemy during battle. It won’t take long to forget that the conflict ever happened. As you meet other allies and engage other foes, you’ll have a hard time remembering the quirky-looking eyeball monster you violently cast from battle. But as you finally reach your destination, and you see all of your ex-enemies laughing, singing, enjoying life, and thankful for the act of mercy you showed them, it will sink in. You’ll think about the odd-looking creature from before. You’ll remember how you got frustrated and gave in to a violent outburst. You’ll notice the empty chair where the monster would have sat. For a few moments you’ll want to desperately restart your game, and travel through the entire experience again just to save that one little monster. 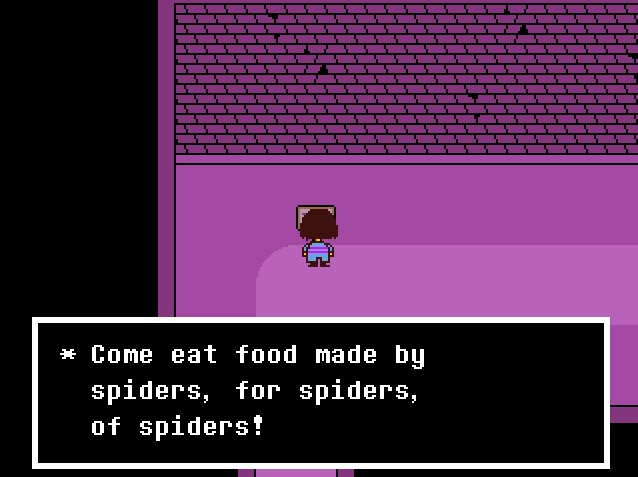 Undertale does a fantastic job of pulling at your heartstrings. It puts you into situations that are easily solved with violence and dares you to take the moral high ground. It shows you the opposite side of the fence: that each enemy you may come across has their own life to live. They’re simply on the opposing team. Whimsical art and a retro-inspired soundtrack give this unique title a lot of depth, and the finished product is an experience that is fun, emotionally startling, and very engrossing. It’s one part humor, one part seriousness, and one part RPG. Are you willing to jump through the necessary, difficult, and often frustrating hoops to save a life? Or would you rather enjoy an easy journey, albeit one wrought with guilt and violence? In Undertale, the choice is solely yours.

I highly recommend giving Undertale a try. If you’re interested in getting more information regarding this release, or think you have what it takes to play the peacemaker, be sure to check out the dedicated website here. You can grab Undertale off Steam right now for $9.99.