The true beauty of Indie games lies in the imagination of creators. There are so many amazing game ideas that would never see the light of day, if it wasn’t for the rapidly expanding Indie scene. Large companies that produce AAA titles are usually only interested in tried and true methods, or large-scale games that expend massive budgets and development times. Indie development allows designers to produce almost any content they want, without the tether of large-scale game design practices or the incessant need to tick a number of imaginary boxes. We’ve seen a lot of wild and wacky releases as a product of this Indie practice. Take, for example, wild rides like Super Meat Boy, Cuphead, Hotline Miami, Fez, and The Binding of Isaac. The particular titles were well received by the community and featured a lot of interesting visuals and gameplay elements. Simply put, they were some of the most inventive, wacky, and weird releases to hit store shelves. That’s part of what made them so charming. They were different, unique, and so imaginative. Thanks to the world of Indie games we have the opportunity to see and experience these types of games, and the future looks bright for the bizarre and eccentric. Another such release, dubbed Gonner, is hoping to secure a spot among successfully strange adventures. 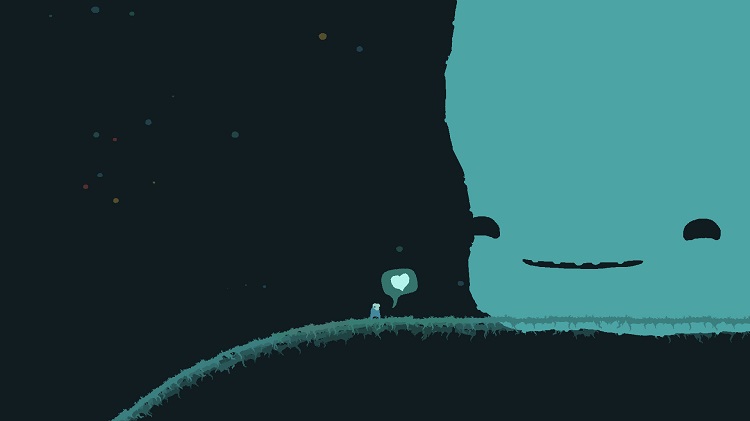 Gonner is a unique 2D platforming journey from developer Art In Heart. The premise follows a small hero named Ikk, who’s on a quest to secure something rather valuable. Ikk is friends with a very special (and very massive) landbound whale named Sally. Wanting to please his only friend, Ikk sets out on a danger-filled voyage to discover the most amazing trinket in the world. You’re tasked with controlling this miniature explorer and helping his skills to overcome the slew of obstacles that await. There are tons of enemies to battle through, a multitude of platforms to hop. Precarious traps and endless pits are scattered throughout the darkness. You’ll need to use all of your skill and a twitchy trigger finger to escape each area, and things only get more difficult as you get closer to the trinket you seek.

The gameplay for Gonner is rather simplistic, albeit incredibly hectic. We’ve seen these types of run-and-gun games before, but Gonner manages to elevate the theme to a sickeningly difficult level at times. Sometimes you’ll lose sight of exactly how many enemies you’re pushing past, and there are moments when there is so much going on that you seemingly drown in an overabundance of unique visuals. This is not a simply task, and Gonner is unapologetic in its difficulty scale. This is part of its overall charm, and each death leaves you hungry and motivated to conquer the world before you. Along the way you’ll discover unique powerups and weapon upgrades that can help you overcome some of the greater challenges you’ll face. Be aware that there are no inventories to be found, and once you pick up a new item you’ll be forced to drop whatever you were holding. This makes it rather important to discover what play-style appeals to you most. Once you find a gun or power-up that you’re comfortable with, you may find yourself ignoring any potential upgrades. 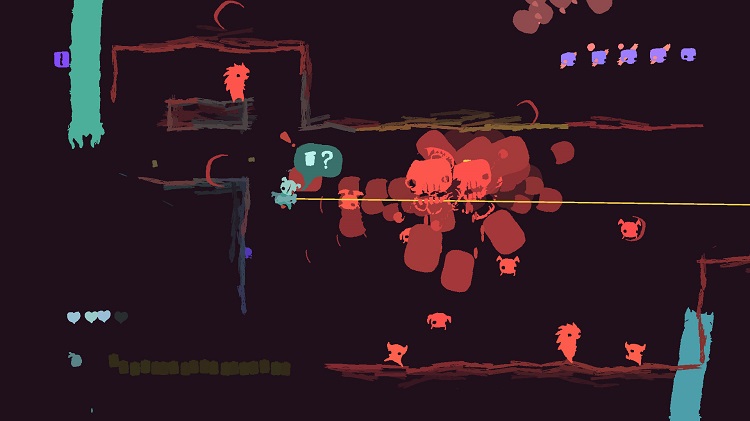 Taking damage is rather unique in the world of Gonner. Not only will you lose a “heart point” when struck, but you’ll also quite literally lose your head. Before you can continue on you’ll need to grab your missing body part and put yourself back together. This greatly enhances the difficulty factor and makes it very important to think about when and where you want to fight enemies. You’ll also be forced to pick up ammo, and there are many instances when expending too much ammo will leave your weapons exhausted and your character at a huge disadvantage. Thankfully, jumping on most enemies will also eliminate them, but it’s much easier to simply blast your foes from range. It may be difficult, and it may be hectic, but the gameplay for Gonner is one of the most fluid and entertaining platforming experiences to hit the Indie gaming scene.

It isn’t just gameplay that gives Gonner such a vast appeal. The art style and visuals are over-the-top and adorably frightening. You’ll face an abundance of enemies that look like minimalist versions of demons. The entire experience has a Castle Crashers vibe about it, with geometrically lopsided baddies. Each environment is crudely outlined in hastily drawn edges, and the majority of visuals you’ll encounter will boast only a single color and lack shading. Thanks to the pitch-black backgrounds and overall dark theme, these visuals manage to pop out rather well. Even the act of changing levels has its own unique visual flair. There are no doors to be found or teleporters to enter. Instead, you’ll find yourself gobbled up and spit out by huge, spooky-looking worms. Underlining the eye candy is a rather boisterous soundtrack that includes some impressive and unique musical scores. Developers warn that the game is much better experienced with a pair of headphones, and trust me when I say they’re absolutely right.

Gonner is easily one of the best indie releases to hit store shelves in past months, and it’s one of the best platforming experiences I’ve had overall. I consider this game to be an instant indie classic, and I’m hopeful that Art In Heart continues their journey onto the Indie scene with more titles like Gonner in the near future. You can grab Gonner right now on Steam, as well as GOG, Humble Store, and Green Man Gaming. For more information about Gonner, be sure to check out the dedicated website here.