Red Solstice knows the best way to serve up alien attacks: nonstop on the surface of Mars during a huge environmental storm. 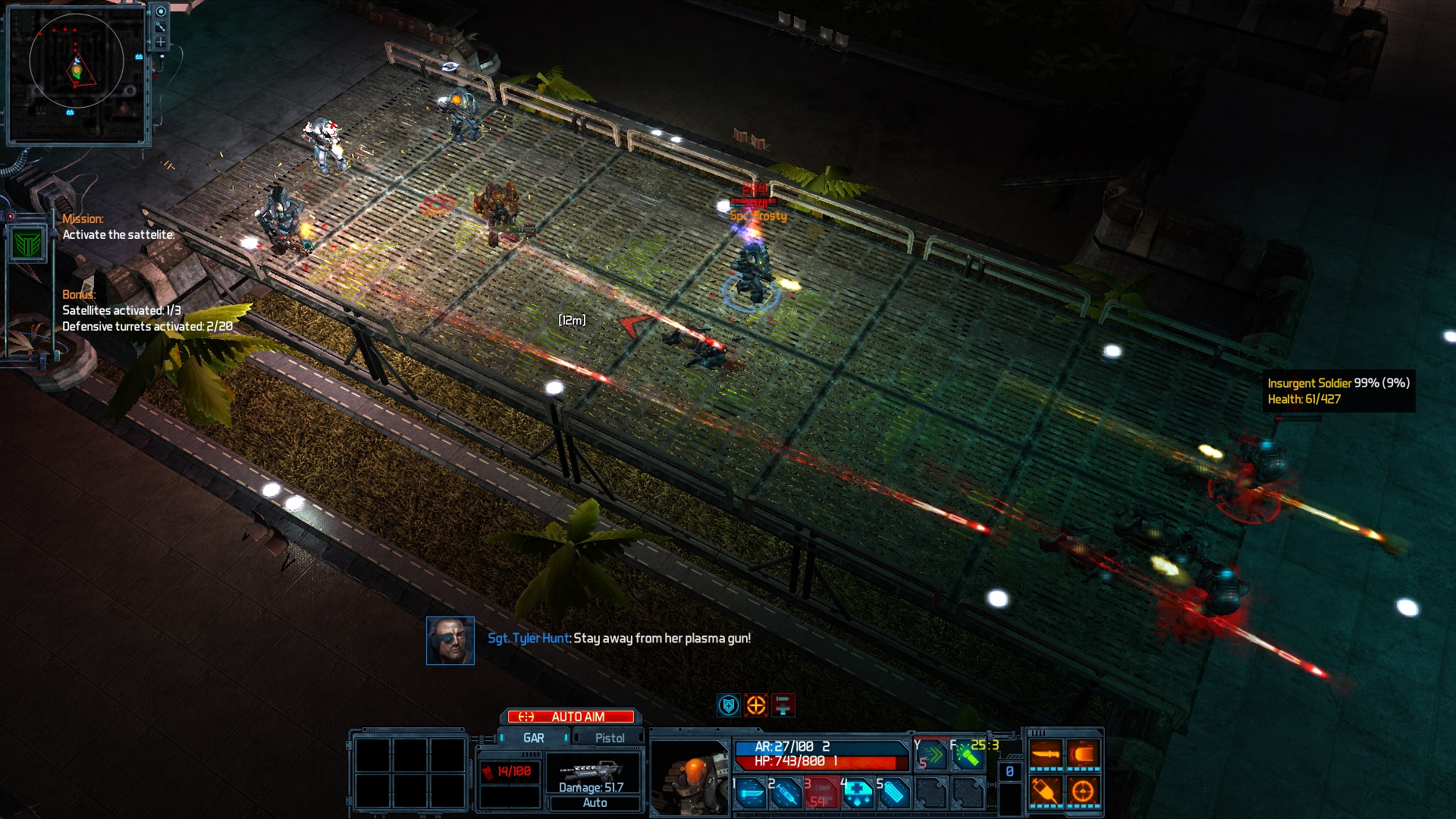 117 days after leaving Earth, a huge storm the now colonized Mars. The storm was so large and fierce, large subsets of the Mars settlements were lost, including the capital, Tharsis.

Now, a group of marines emplyed by the Elysium Corporation are being dropped into the eye of the storm to determine what became of the largest colony on the surface of Mars.

As it turns out, what’s concealed by these storms is a terrible virus and a horde of grotesque alien creatures. Guided by your AI companion TARA, you and a group of other marines must complete a variety of objectives on the planet’s surface while avoiding running afoul of any bloodthirsty batches of creatures.

The Red Solstice just released on Steam Early Access after a successful Kickstarter campaign back in April. The game is described as a tactical cooperative survival game. After giving it a few tries before release and seeing how it works after Early Access went live definitely proves that title to be accurate. 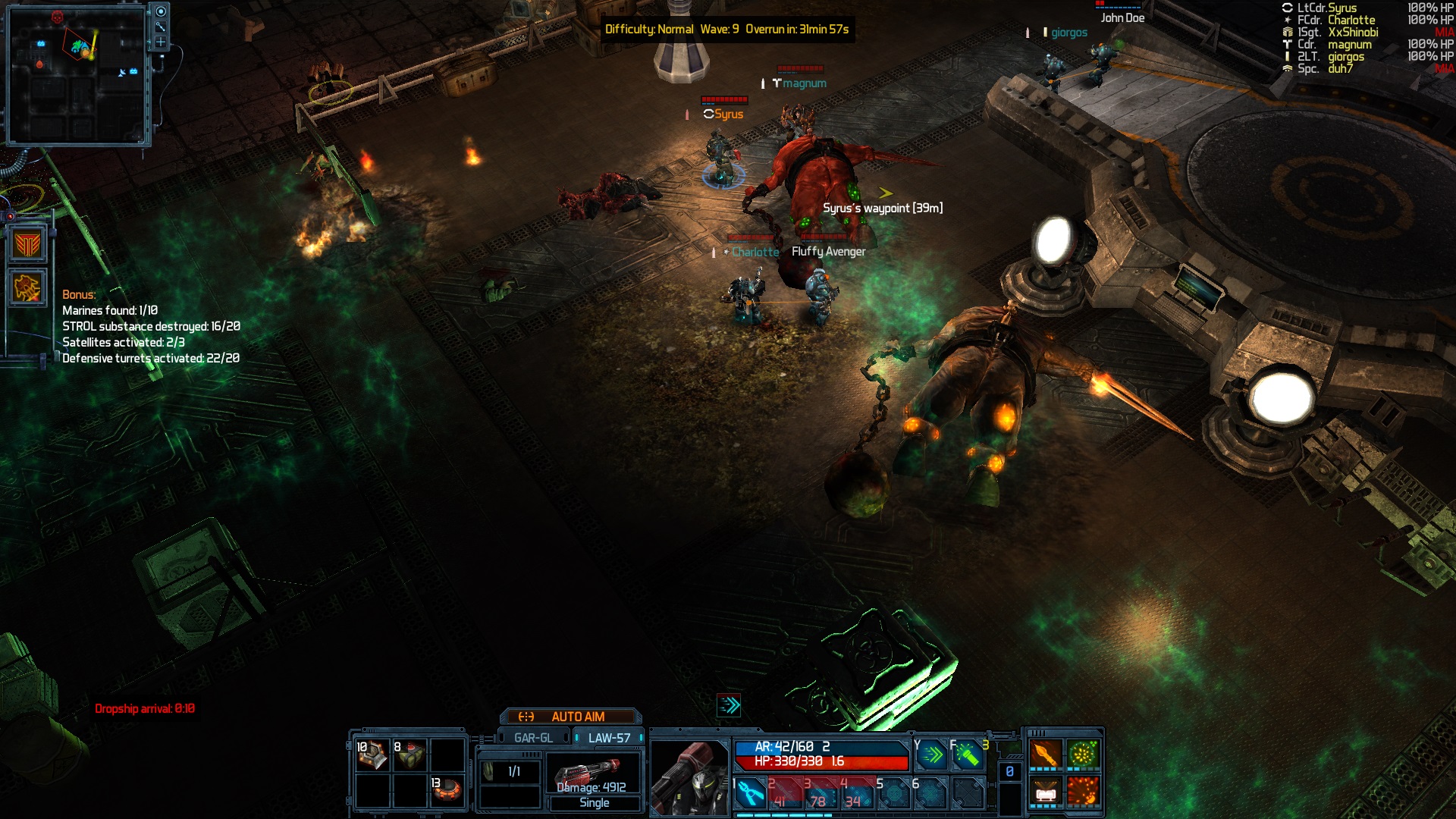 You control an Elysium marine in a customized suit of armor. Once dropped on the surface, you and your comrades not only have to deal with waves of increasingly powerful and hostile enemies, collecting supplies and ammunition, and investigating the area to complete various missions before calling in an evac to escape alive.

The game features eight different classes to occupy different roles in your squad of up to eight marines. You start with access to a limited selection of suits, mods, and abilities that grows as your play through the game more and more. The assault class is a balanced starting suit with a simple gauss rifle and decent armor and mobility to act as a frontline damage dealer.

Other roles are more specialized. Heavy Support sports a large minigun and abilities that allow them to attack at high speed, but they move slowly and have a very long reload time on their weapons. Medics can keep other players alive in tense situations. Recon troops move quickly and have access to varying forms of air support, but are very lightly armored. Demolitions is fairly obvious in function, as is the marksman. The terminator class rocks a powerful plasma gun and the ability to manipulate energy directly to disrupt enemies. The hellfire is a scorched earth damage dealer with built-in napalm canisters and heavy shielding. 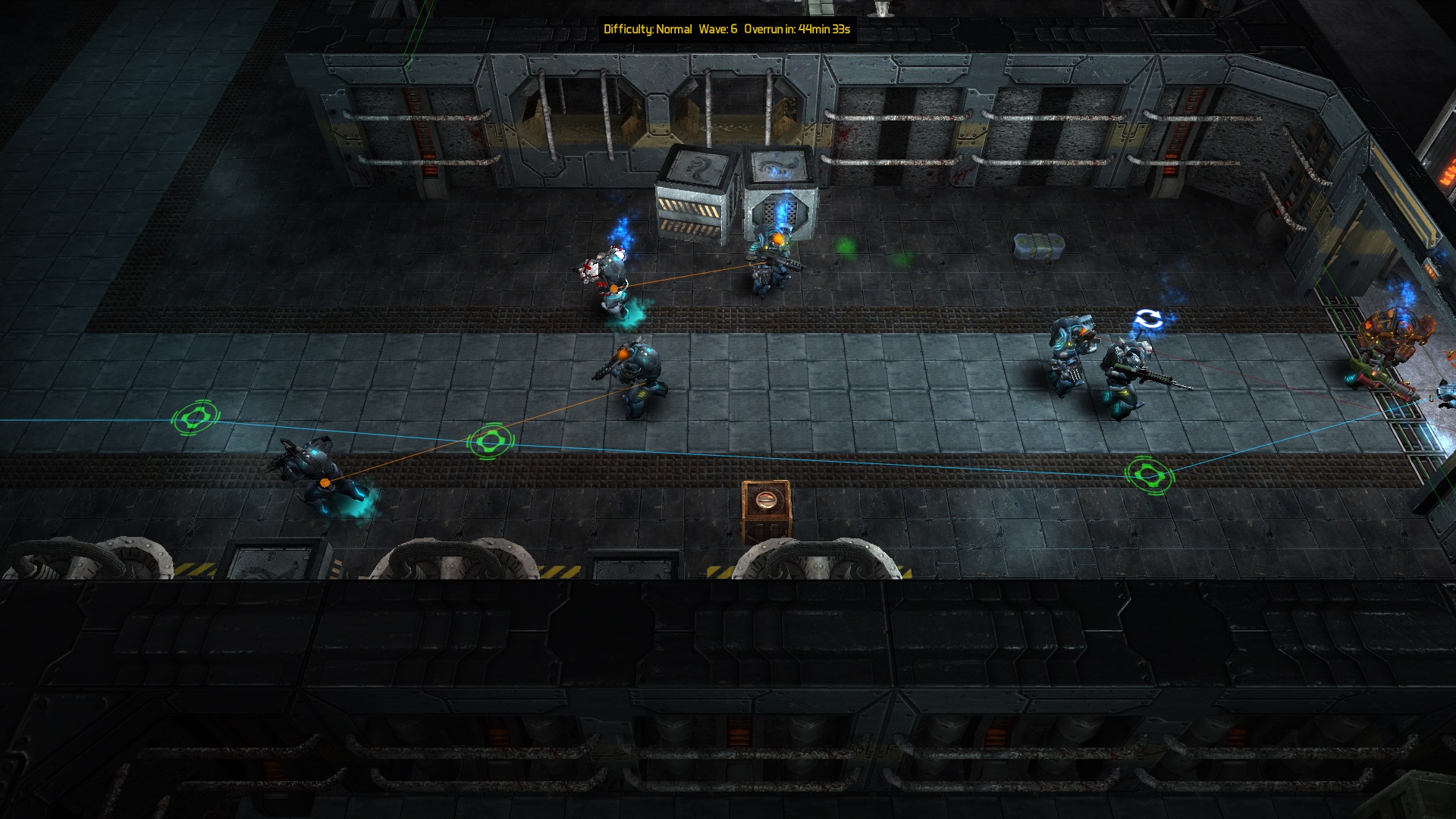 Each suit has four slots for upgradeable abilities that you can mix and match from a set list for each role. As you level up during a match you can upgrade these abilities to further flesh out your character’s abilities. These can include basic upgrades like critical targeting systems that give you a chance to do bonus damage or an increase in ammo capacity. Others are more specific for each class: a heavy support can learn a toggling stance that greatly increases attack speed at the cost of most of your movement rate, while recon can learn to call down supplies, napalm strikes, or artillery fire.

You can also tweak a few other aspects of your character for certain situations. You’ve got several powerup slots that increase some stats while reducing effectiveness elsewhere, like ammo powerups that increase damage, but also increase reload time. You can also select from a variety of ammo types that can more effectively harm certain enemy types. 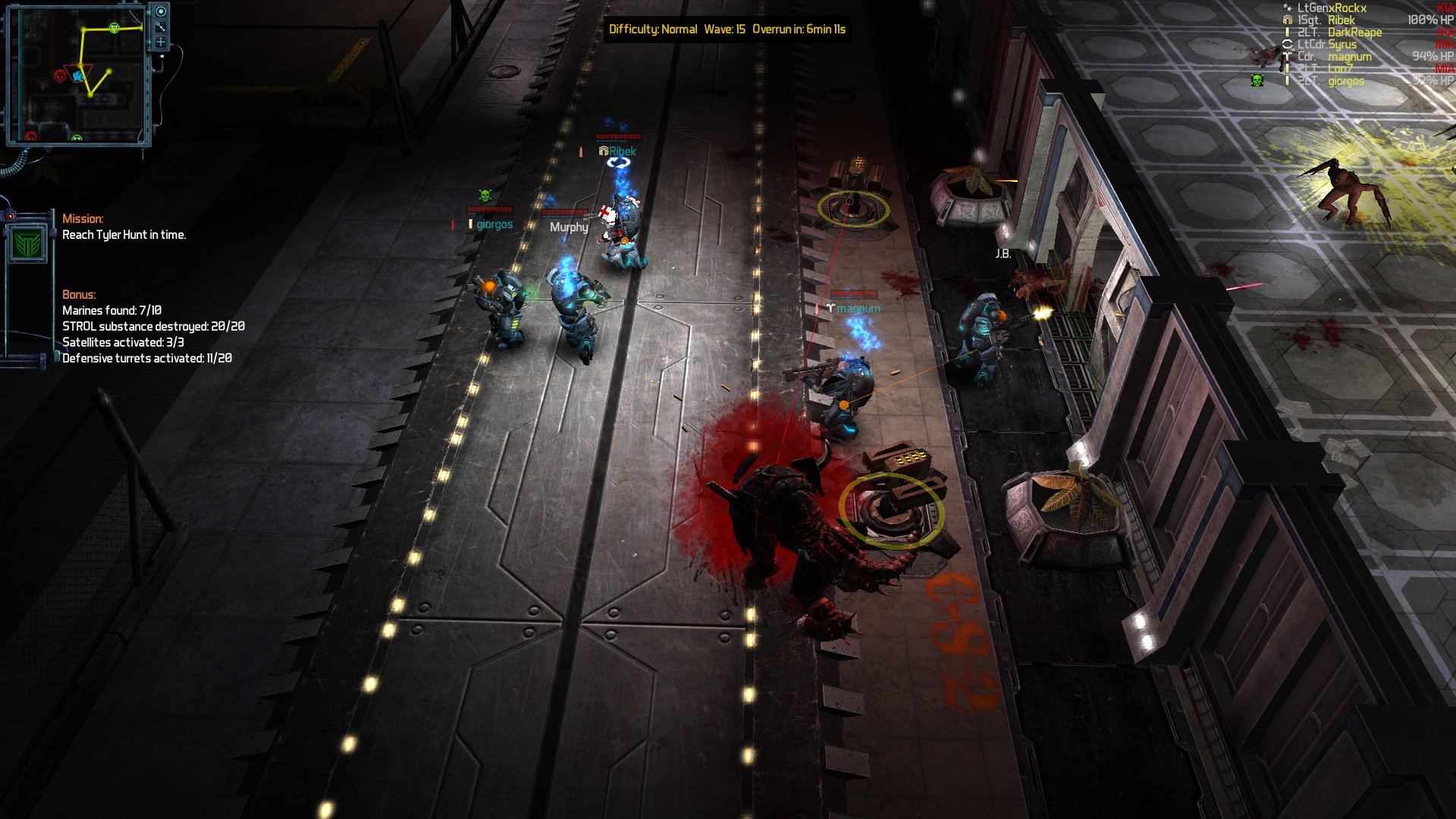 All these tools are utterly important.  The Red Solstice is not an easy game by any stretch, though perhaps it’s merely balancing the developers over at Ironward (a Croatian studio) haven’t had a chance to implement yet. There are four difficulty settings in the game, but unless you’ve spent a good amount of time unlocking suits and weapons, you’ll want to stick to easy.

Though the in-game descriptions indicate that easy recommends at least three players, I was only able to make decent progress in a match when I was with a squad of six others. Even then, in many cases if the players don’t actually interact and communicate, things will quickly go south and result in the death of everyone on the squad. 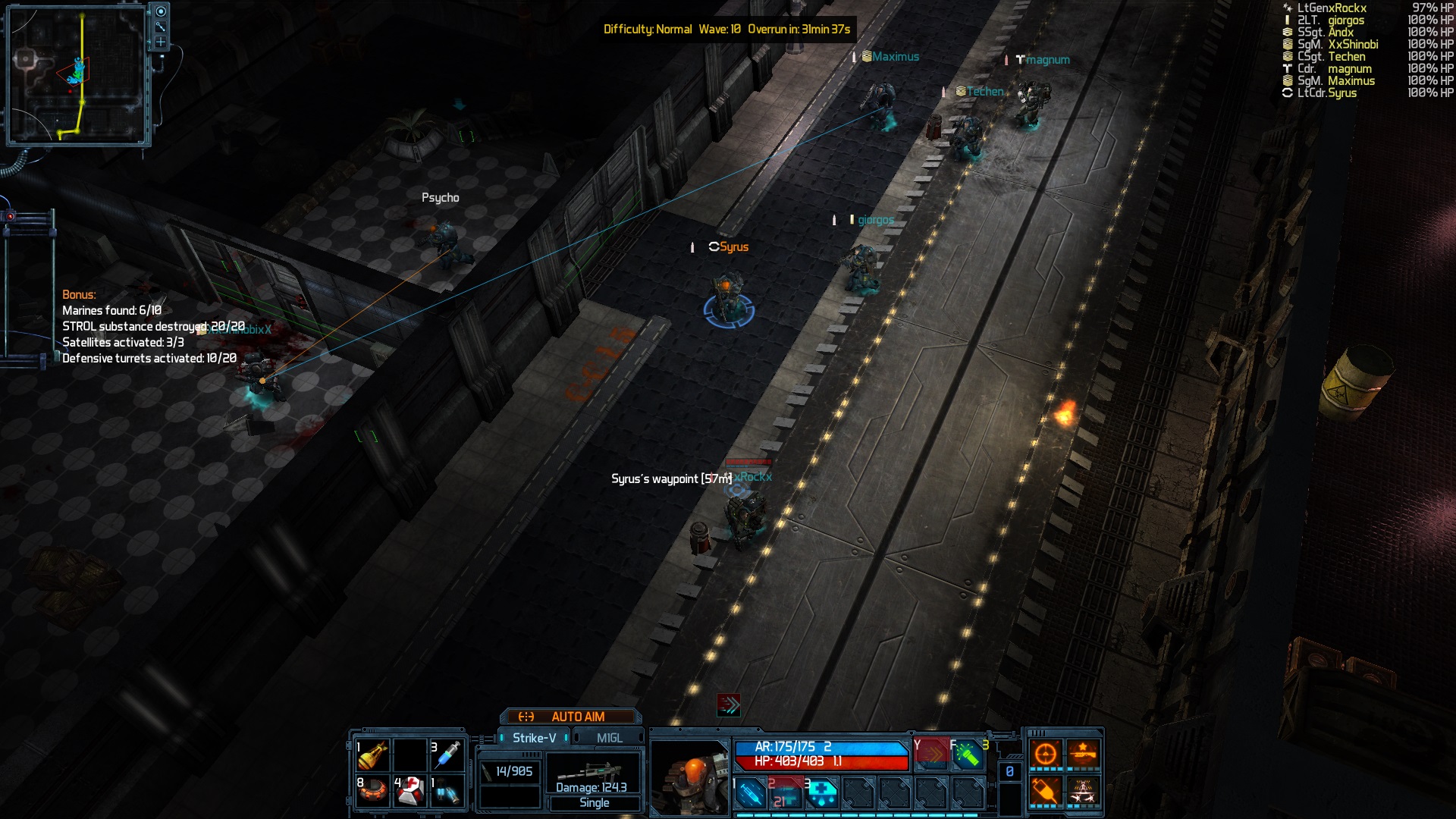 Eventually, I entered a lobby in which someone asked if someone wanted to take the lead while playing. Despite my general inexperience, I jumped at the opportunity and what followed was actually one of the more compelling co-op experiences I’ve had in quite some time.

Our dropship placed us dead-center in the map. Right away, we located a nearby structure with some deactivated sentry guns outside and a series of lockers inside. I was a recon trooper, and quickly specialized in calling down air support. I set my crew to getting the gun online right away, while the rest of the squad headed inside to start rummaging for supplies. We came away with some extra ammunition, medical supplies, and explosives.

We set about making things easier for ourselves, finding a nearby radar dish and holding off a wave of monsters while one of our support guys powered the dish on, revealing all enemy positions in 100 meters. TARA chimed in, giving us our first objective: locate the source of a faint distress signal a ways away.

While making our way there, we start to work the environment to our advantage, throwing explosive barrels of fuel to block chokepoints behind us, and blasting through the occasional pile of crates to quickly access areas we may not have been able to before.

Some of our men began to waver, but I kept the lines of communication open, setting rendezvous points, making sure everyone was stocked on the supplies they needed, and forming battle plans to maximize each member of the squad’s talents. 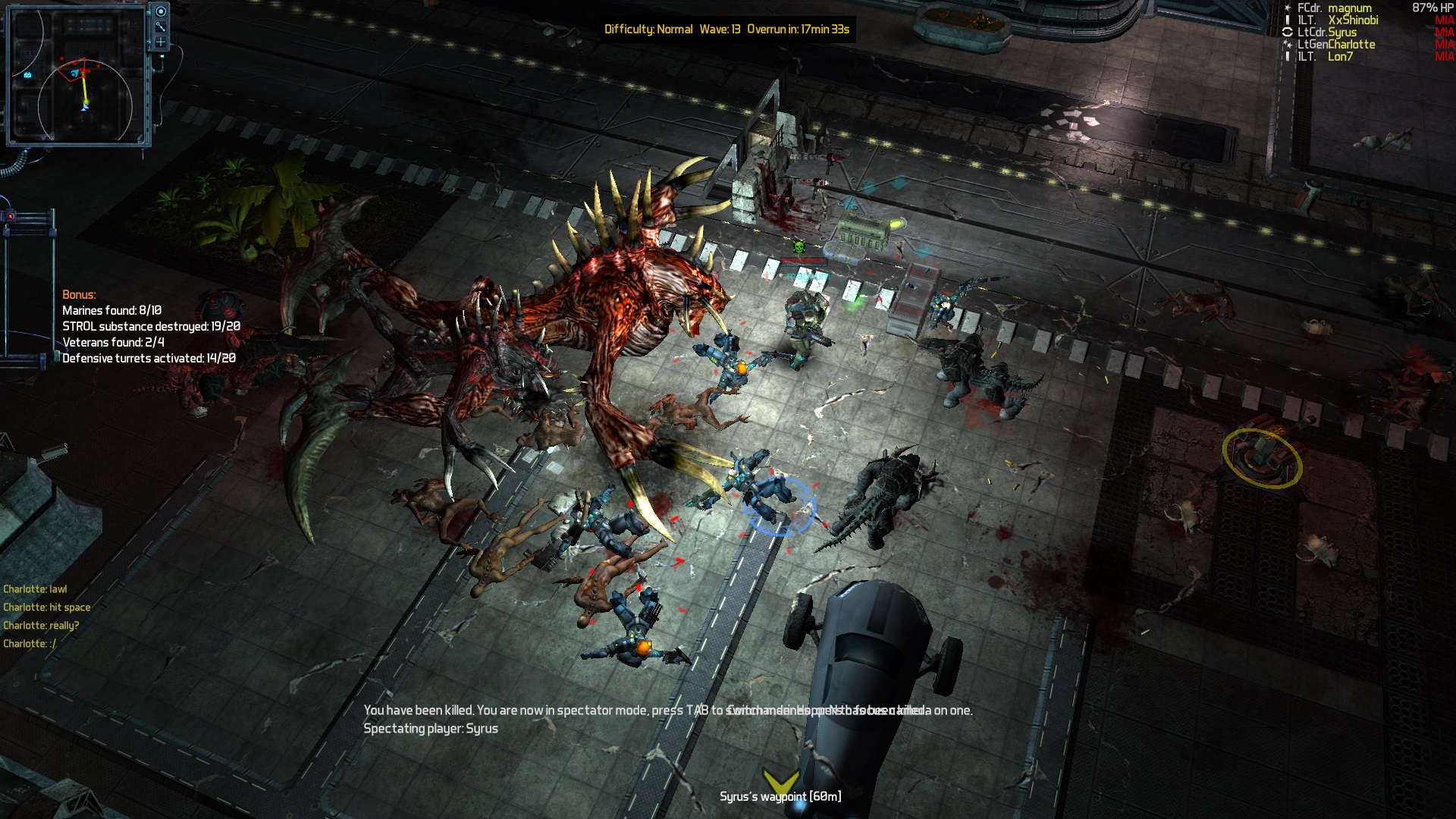 As the threat levels began to rise, we completed what appeared to be all available objectives. We had previously found the item that let us call for evac, but something went awry. Either evac was called and we missed the pickup, or someone dropped the item. Regardless, we began to lose men to the approaching hordes, and I may have accidentally killed a comrade by calling down an artillery strike without properly warning him.

Eventually, we all fell victim to a huge explosion that, admittedly, none of us were able to determine the source of, but still, the entire experience was incredibly tense. The feeling of euphoria that came when a large threat appeared and the team came together to drop it effectively was strong, and the struggle of trying to keep your men alive and functioning under pressure can be very fulfilling.

The game will keep you coming back with randomized level layouts and threat generation, so no two games are exactly alike. By turning on “secondary missions”, TARA will occasionally chime in with new objectives on-the-fly. For the moment, there are only a few iterations of what missions can appear, but as time goes on, there are bound to be many more ways that the game can diversify your matches.

The game is still in (very) Early Access, and has quite a few kinks that need to be worked out. Many of the UI elements are intrusive and difficult to sort through with any sort of accuracy, and many of the elements that appear are unexplained. The minimap meets the minimum requirements to be a map, with no options for zooming or scrolling, and bad (or no) indicators for objective locations and the like.

It’s also pretty easy to lose track of your character when things really start to move faster, though I miraculously found out that the space bar will center your view on your marine. Given the game’s intense focus on tactical cooperation, the lack of an in-game voice chat option seems like a real oversight, even if that is really easy to circumvent. 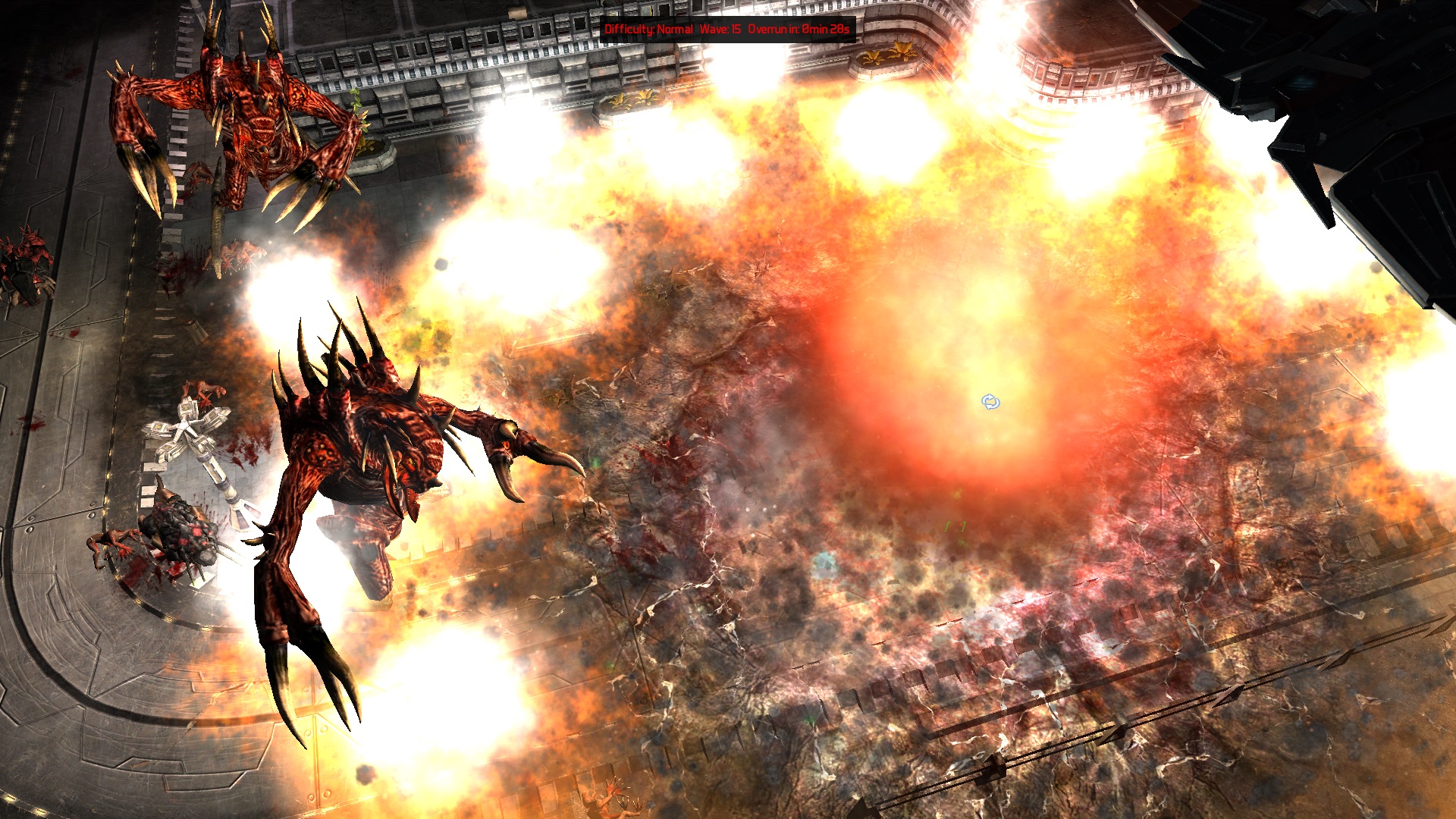 Given that this is the only game under the Ironward bill, I’m still impressed with the overall presentation. It’s rough, that’s for sure, but the palpable sense of fear that comes with seeing a boss monster crawl out of the ground nearby is surprising, and the sense of camaraderie I felt with these random strangers was quite a bit stronger than I would have thought.

This is definitely a game with a lot of potential, and since the game is in Early Access, your input can bring about a lot of positive changes that can make this game great.

The Red Solstice is available on Steam now, and is available temporarily for $14.99, before eventually going to the actual price of $24.99. If you’re a fan of classic RTS-style controls with a heavy helping of tactical cooperation, you’ll definitely want to give this one a try.