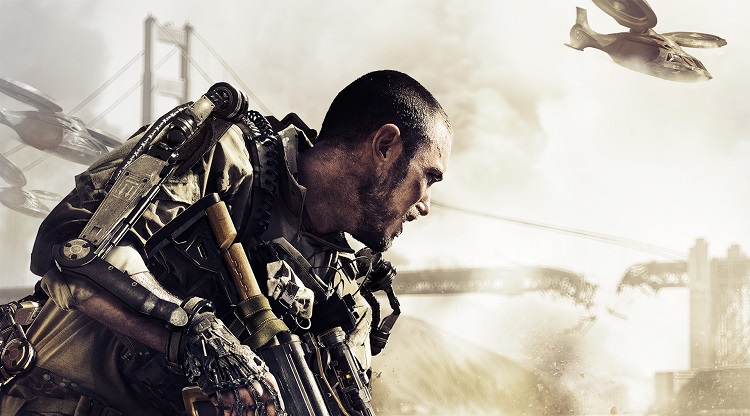 Take the fight to the future with Call of Duty: Advanced Warfare

The Call of Duty franchise hasn’t changed much over the years. We’ve seen a handful of developers re-imagine the traditional military battlefield, using different time periods and world powers to capture their iconic brand of FPS action. But the action has remained fairly perpetual. In fact, amidst the development carousel, Call of Duty has been running on the same modified engine since Call of Duty 2 released back in 2005.

At this year’s E3, we were presented with a much different looking Call of Duty, and although the gameplay mechanics appear to be very similar on the surface, this newest installment has a fresh feeling to it. Sledgehammer Games, the developer behind Modern Warfare 3, is hoping to bring this gaming mainstay to a new level, by offering up a completely redesigned, futuristic experience, with Call of Duty: Advanced Warfare. Their latest creation will run on a completely new, in-house engine, and will provide fans of the series with a slew of new gameplay mechanics and weaponry.

Rather than draw on war scenarios of past, or mimic modern day technologies, Sledgehammer Games has decided to craft their own vision, one that lies decades into the future, in the year 2054. During this time, the United States and other global military powers have fallen second rate to dominant, private militias and protection corporations. The single-player campaign will revolve around Atlas, one of the most prominent security firms of the future, a company run by Jonathan Irons, who will be played by actor Kevin Spacey. Irons becomes frustrated with the United States lack of initiative, noting that America has failed in numerous attempts through the years to govern itself as a protective global super power. This causes the irate CEO to wage his own war, in an attempt to become the world’s foremost military authority, an unchallenged and supreme corporation. 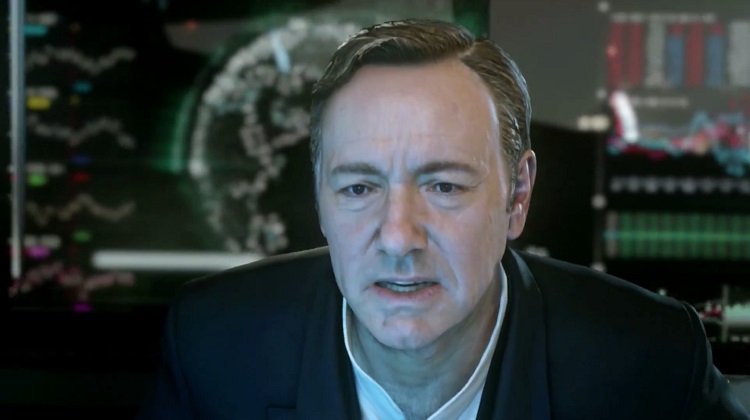 The gameplay reveal trailer showcases a U.S. Marine named Mitchell as he makes his way through a warn-torn version of Seoul, South Korea. Spider Tanks rumble through the streets, and massive aerial carriers transport troops to the far ends of the city. It’s traditional military tactics taken to the next level, and even the battlefield itself feels different in Call of Duty: Advanced Warfare, it has a air of strategy to it, as we watch units move into flanking positions that were once impossible thanks to futuristic technologies. There is a sense of tactical advantage, something that was missing from the running and gunning of Call of Duty past.

The weapons themselves are futuristic in flair but still maintain a modern appearance. Although we do see a variety of projectile types now, ranging from standard bullets, to red hot lasers, to shotguns that produce a type of kinetic blast. Additional equipment has changed too, with grenades that are capable of flight, locking onto enemies and propelling like a rocket towards them. We even see an intel-style explosive in the trailer, one which is thrown and then relays information back to the user, showcasing hidden enemies by highlighting them in a bright red, holographic outline. One soldier is caught sporting a massive, mechanized suit, that thunders loudly with each machine-driven step. 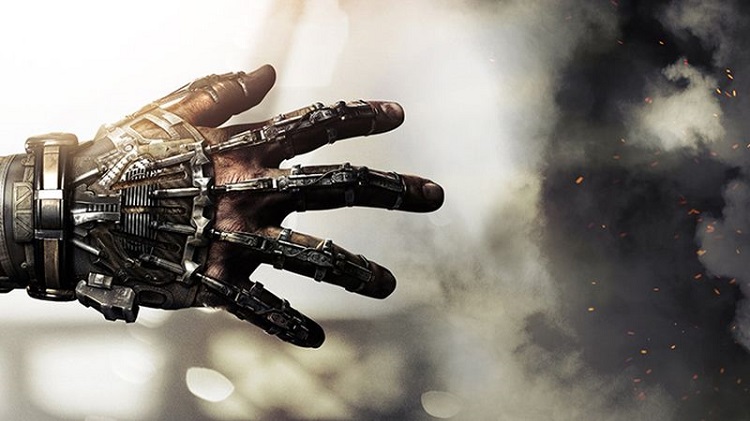 Movement has changed too, as each soldier is equipped with sleek yet powerful exoskeletal upgrades. These tools will allow you to run faster, and fall from great heights thanks to jets within your soldier’s boots that can be activated to cushion a landing. These same jets can be used to boost your jumping height and distance, allowing you to leap over tall obstacles when evading gunfire, or giving you the ability to reach areas that would otherwise be impossible to scale. You’ll also be able to go “prone” as showcased in the trailer when Mitchell is forced to lie down in order to avoid a swarm of drones.

Call of Duty: Advanced Warfare will see a decent bump in visuals as well. Although there are some scenes within the gameplay trailer that are lacking graphically in some areas. The title will also see an interesting twist, as the traditional Call of Duty HUD is replaced. Sledgehammer Games wanted to craft a title that was more streamlined and immersive, and their vision of the future has everything displayed via holographic technologies. Numbers that display total ammo, as well as bullets per clip, will be transposed directly onto your weapon. Sledgehammer Games promises that each area will paint the picture of a living, breathing, technologically enhanced world, and the developer has created a lot of imaginative art to help immersion. 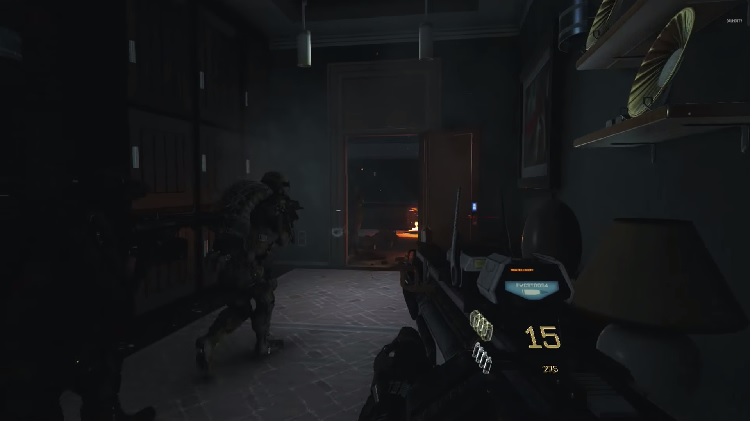 We can expect to see a similar multiplayer experience that draws from the success of the franchise. Balancing, upgrades, and customization will take center stage, surrounded by heated multiplayer skirmishes and intense FPS action. It isn’t yet clear on what we can expect in terms of weaponry, perks, killstreaks, and the like. Call of Duty multiplayer has always been a competitive and entertaining addition to the FPS world and we doubt that Call of Duty: Advanced Warfare will be any exception to this rule.

Call of Duty: Advanced Warfare is slotted to release on November 4th, 2014, for PC, Xbox One, Xbox 360, Playstation 3, and Playstation 4.