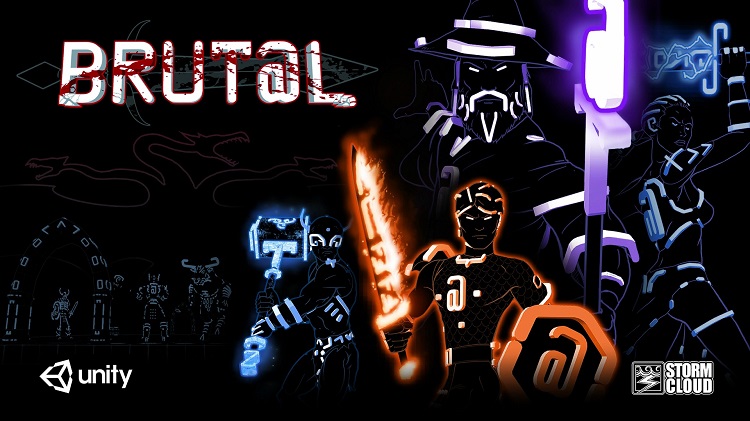 The 1980s were a magical time that blessed the world with a lot of fantastic creations. We saw the birth of the Teenage Mutant Ninja Turtles, the creation of Super Mario Bros., and a slew of other amazing products like Reebok Pumps, Hi-C Ecto Cooler juice drinks, and the Pogo Ball. What you may not know is that the 1980s also gave life to Rogue, the first ever dungeon-crawling experience and what would become the catalyst for many popular franchises in the modern age. Rogue was an ASCII-based adventure that used the DOS operating system and a series of numbers and letters to craft procedurally-created dungeons and experiences. Rogue is directly responsible for the term “roguelike,” and any game crafted in such a manner is in some way an homage to the retro release. Title’s like Rogue Legacy, Spelunky, and even Diablo, have done a great job in carrying on the tradition of the original Rogue. Indie developer Stormcloud Games is taking a different approach in their tribute towards roguelike’s beginnings. Their release, dubbed Brut@l, is a roguelike in a very literal sense.

If you were around to experience the original Rogue, you’ll enjoy what Brut@l has to offer on a very different level. That being said, those of you unfamiliar with Rogue will still find much to enjoy with Brut@l‘s fast-paced gameplay. At the core, Brut@l functions very much like a traditional roguelike. You’ll find yourself diving headfirst into procedurally-crafted dungeons, filled to the brim with enemies and environmental hazards. When your character perishes, they are permanently lost, and must be reincarnated. You’ll lose all of your dungeon progress, forcing you to start anew each time you fall in battle. On the positive side, Brut@l also features ways in which to make your character stronger. You’ll find and brew potions, collect letters to craft powerful gear, and even make use of class skill trees to unlock new abilities and traits.

One of Brut@l‘s better features is its combat system. Attacks and dodges move in a very fluid manner. There are situations where you can dive under an enemy to strike them from the backside, or leap over their head to gain a better attack advantage. The fluidity of movement is an important element to master. There are many enemies that can strike you down or take massive chunks away from your health bar with each successful hit. This adds a nice layer of tactical gameplay to the combat system, forcing you to think about how to engage an enemy and giving you an opportunity to learn and study their attack patterns. In true roguelike form, there will be many instances in which you perish a few times before fully grasping how a particular obstacle is overcome. Don’t expect Brut@l to hold your hand when it comes to brewing potions, either. If you want to know exactly what a given concoction will do for your character, you’ll simply have to brave the liquid and swallow it whole.

Gamplay mechanics aside, what truly casts Brut@l out as a literal roguelike is the art styling. To the untrained eye, a first glimpse would classify Brut@l as an artistic piece, using a wild and simplistic styling to achieve its goal. If you look closer, however, you’ll notice that everything within the game world is crafted by ASCII. The difference, is that Brut@l presents these elements in a three-dimensional plane, which can make them hard to understand and see at first. All of the characters, enemies, gear, and the environment, are crafted from letters and numbers only. The finished product is a game that pays beautiful homage to the original Rogue and stands out in bright fashion among the crowd. Don’t be fooled either — just because this release uses numbers and letters as the foundation for its creations doesn’t mean everything looks bad. To some, the art may be a little busy, or overly stiff, but developers did a fantastic job in piecing together elements that look like they’re from the modern era of gaming. This gimmick is made even more entertaining when you take to discovering new weapons. You’ll first need to find all of the letters or numbers necessary to craft the item, and can then marvel when you see the ASCII curl, warp, and twist, to form powerful tools of destruction.

In its current state, Brut@l offers an experience in which you must conquer 26 procedurally-generated floors to gain entry to the Guardian of the Dungeon. This massive and terrifying looking boss will truly test your mettle, and defeating him is the only way to prove your dungeon-crawling prowess. This is much easier said than done, and Brut@l can be a very unforgiving experience. Thankfully, you’ll be able to tackle the journey with a friend via local couch-cooperative. You can work together to craft items, slay mighty beasts, and journey further into the dungeon. There are four separate classes for you to choose from, ranging from Mage and Warrior to Amazon and Ranger. This gives a little more depth to each experience and lets you and your co-op buddy choose classes that complement each other.

If you find yourself ascending to a skill level in which you easily decimate the Brut@l dungeon with each playthrough, you can take your skills and use them to challenge the community. Brut@l features a nifty dungeon creation tools that allows you to craft, save, and share experiences with other players. This gives the end-game for Brut@l a lot more depth and helps to stretch the experience out once you’ve finished the main game. You’ll be able to set up your own dastardly traps and fill your dungeon with powerful enemies. You may even create something that you’ll have a hard time overcoming.

Brut@l is currently available for purchase on the Playstation Network for Playstation 4. If you’re interested in getting more information regarding Brut@l, be sure to check out the dedicated website here. You can also keep up with Stormcloud Games by following the group on Twitter and Facebook for more information about future products and impending Brut@l updates.