‘Snowball!’ is a massively entertaining winter-themed pinball release on a grandiose scale

Anyone who owned one of the very first Windows-based PCs probably remembers loading up Space Cadet pinball at least once or twice. Although I usually only played it when the internet was acting up, Space Cadet helped to fuel my passion for virtual pinball titles. I’d always been enamored with the huge pinball setups in local arcades, but there was something so charming and relaxing about being able to play a multitude of table types from the comfort of the couch. Unfortunately, I haven’t come across many enthralling pinball adventures lately. Even with the boom of mobile gaming, there seemed to be a serious lack of fun and engaging pinball titles. That is, until developer Pixeljam released Snowball! to iOS and Google Play.

It might sound odd that a whimsical winter-themed snowball rolling game would stand out as one of the greatest pinball releases in some time, but that’s exactly what Snowball! does. From its beautiful retro feeling to its rather huge “table,” Snowball! is a wondrous adventure through snow and ice. The immense scale is just one of the unique and endearing qualities that makes this game so entertaining. The table on which you play is a huge park that has been transformed, thanks to the imagination of a group of playful children. They’ve spent countless hours carving ramps, crafting tunnels, and building structures to create a massive obstacle course for a giant rolling ball of snow. The children have even engineered massive flippers that they control by pressing down on large switches. The end result is a life-sized pinball table complete with collectible items and various tiers to explore. 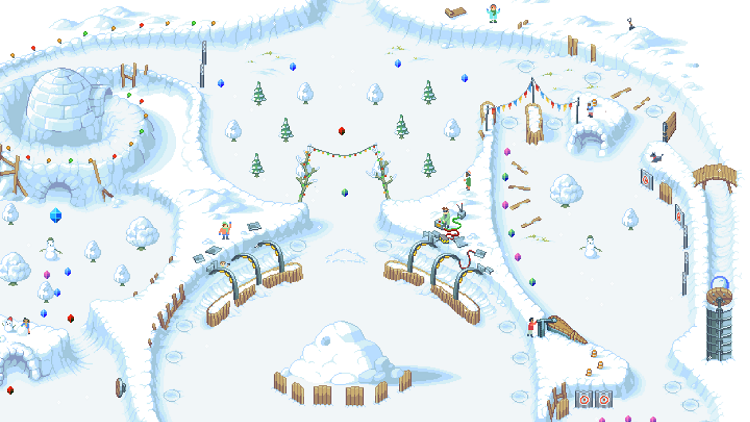 What makes Snowball! such an enthralling play is the amount of hidden secrets and bonuses to activate. There are many caves to enter, structures to knock over, and items to collect. You’ll need to position your ball perfectly to discover a lot of these areas — and that can require multiple playthroughs if the table decides to toss your hard work into the fire. Located at the bottom of this immense park is a massive bonfire, built to keep people warm and destroy your pinball hopes and dreams. If your snowball manages to slip past the large flippers it will tumble directly into the fire and quickly turn to steam. With most pinball games, we simply see our ball tumble down into the darkness, but Snowball! gives us a greater sense of urgency by showing us that the ball is quite literally destroyed.

Snowball! is beautiful, with high-quality art and a mass of entertaining pixels to look at. There are so many things to see and experience that you’ll most likely need to play through multiple times just to see all of it. Snow-dusted trees and large igloos stand out among massive carved snow-walls. You’ll find wooden structures and steel arches, as well as an abundance of snow piles that act much like bumpers. There are even large Tesla coils that will grip the snowball and sling it around should it roll too close. I’m very impressed with the artistry that went into Snowball! and the musical scores do a great job in underlining the whimsical feeling that everything else promotes.

If there is one negative about Snowball!, it’s the price point. This release is currently $2.99 on Steam and $1.99 on iOS and Google Play. That’s a small price to pay for solid pinball gameplay and beautiful artistry, but Snowball! doesn’t offer a ton of replayability. Once you master the table, you’ll find yourself trapped in an endless state of score-keeping. Besting your high score is all that’s left after discovering all of the hidden secrets. It would be nice to see at least one more table to increase replayability for this title. The good news is that Pixeljam is planning some updates in the near future. A night/hardcore mode is currently on slate, as well as a Time Attack mode, and some new musical scores. This should help a little bit with the monotony issues, so you shouldn’t feel bad shelling out a few extra bucks for this engaging release.