In case my love of stealth games hadn’t been made obvious by my coverage of Metal Gear Solid V, Styx, or Payday 2, let me be clear: I love few things more than being stealthy in a game.

It’s a double-edged sword in some cases, though, especially when it comes to playing a stealth game on a platform that might not be well-suited to the task, as may be the case with mobile fantasy stealth game Sneaky Sneaky. 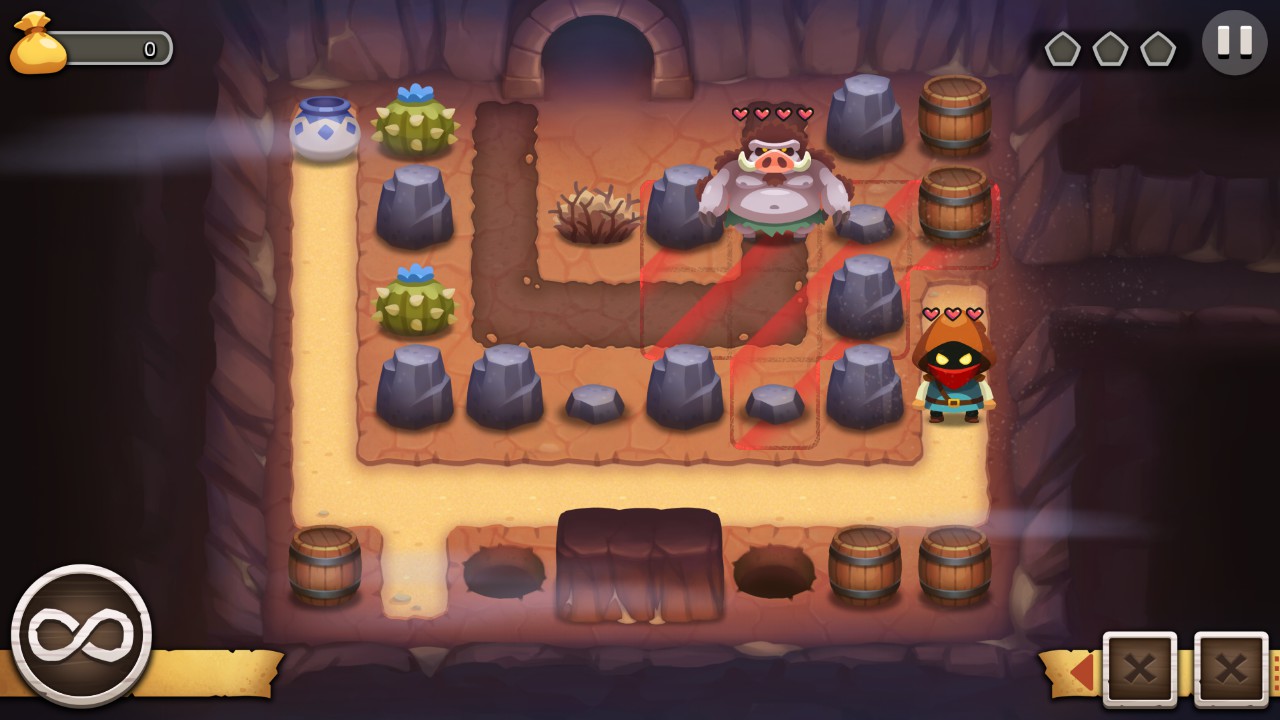 It’s a tile-based stealth game that bills itself as “turn-based”, but seems to straddle a strange line between alternating action and real-time sneaking.

You play as the titular Sneaky, a mysterious and hooded figure who recently made off with a stash of the Sultan’s rubies. You’re caught, however, and a bird manages to make off with your gems. After a brief stint in what I imagine is a cartoony version of a Turkish prison, an unknown ally gifts you the key to the door and sends you on your sneaky way.

What follows is a sort of action sort of puzzle stealth game that feels like it had the right idea, but was lost in translation somewhere.

Each stage is a small set of rooms, very much set up like a classic Zelda dungeon. You click or tap on a nearby tile and Sneaky will move there. Sometimes you’re tasked with simply navigating a small puzzle, but most of the time you’re also contending with various monsters that patrol about the space.

You can elect to engage these enemies or not, but the game certainly seems to encourage you to do away with your foes in a quiet manner. You have a small variety of foes that mostly function either as monsters on a set path, or monsters that arbitrarily move about the space with no rhyme or reason, something I find to be immensely frustrating.

One of the major draws to a stealth game is your ability to take a breath and observe your enemies in order to properly plan your next action. This might be possible in some areas of Sneaky Sneaky, but once you run into, say, a random slime, it becomes a chore to try to hide in a bush and launch a sneak attack. Rather than capitalize on a proper moment, you have to just wait until the slime is far enough away to be safe from harm, then remain hidden and wait until it comes closer.

This is compounded by the fact that while in stealth, your enemies move independently of your movement. It’s not like you move one square, they move one square, but instead tasks you with trying to move to  particular tile while the enemies move on a basic timer. This makes sneaking up directly behind a patrolling monster nigh-impossible, as you can’t click the square they’re moving out of (they still occupy it, technically), and if you hit the square behind that one, you’ll be too far away to attack your enemy.

All these little input quarrels have led to my discovery dozens of times, which is where the turn-based aspect of the game kicks in. Upon being spotted or (less often) starting an encounter of your own accord, the game converts to a turn-based system in which you alternate sets of three actions until you or the enemy (or enemies) that sees you perish.

Most enemies will just approach you quickly and try to poke you until you die. There’s not a lot of strategy involved early in the game when combat arises, but later in the game it becomes more necessary to try to shift an enemy away from you in order to make sure you don’t engage with multiple enemies simultaneously.

You’re supported in your endeavors by a series of growing abilities and items to make your life a little simpler. What’s also interesting is that many of these new attack vectors also open up new ways to move through the environment. You start with nothing, of course, but quickly gain your knife for basic combat ability as well as the ability to smash barrels, health potions for emergencies, a bow and arrow with an axe to attack from a distance, solve some puzzles, and chop down trees. 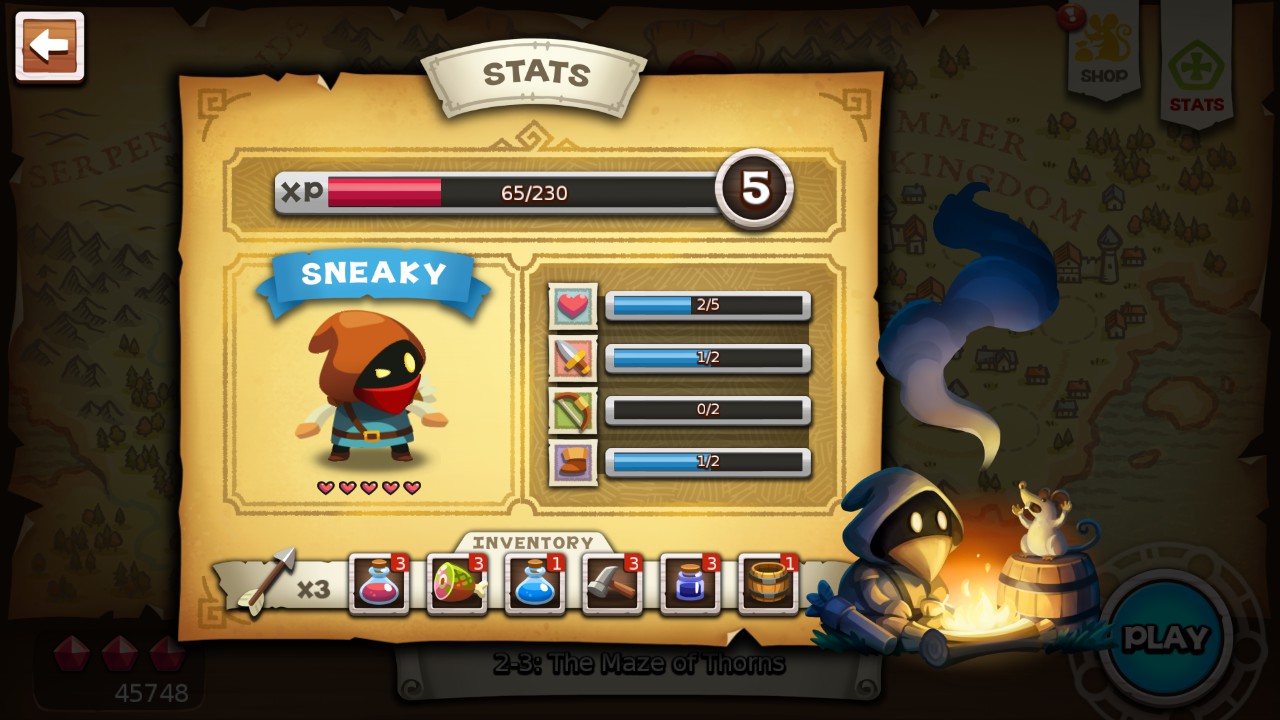 You’ll use all these tools in order to try to reach the exit, kill all enemies, and do it hopefully unnoticed and unharmed. Do well and you’ll come through with a higher score. Higher scores mean a better medal, and a better medal provides more experience. Level up and you can enhance combat mobility, attack power, health, and a few other abilities.

Don’t expect anything too crazy in the visual department, either. It is a mobile title, after all, but the style of the piece isn’t particularly unique or amazing. The environments are colorful and fairly vibrant, though, and the UI is presented in such a way that there will be little confusion as to how to move on or what areas you should avoid.

All told, it’s a decent way to distract from your standard tower defense games or other simple puzzle games, with its action aspect. The game is still undergoing some beta testing, so the good news is there’s time to respond to feedback and for Naiad Entertainment to tighten the screws. Fixing the responsiveness of the controls will go a long way to making this game one that can be easilye