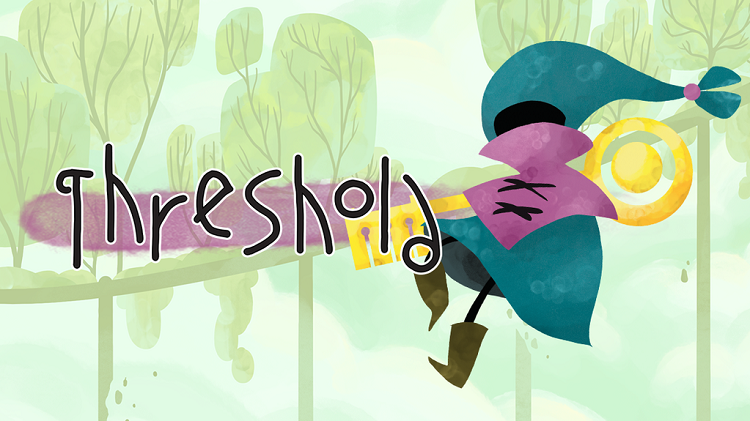 Think back on games like Fez and Braid. Did you play them and, if so, was it the beautiful art and innovative platforming that stole your heart? QuadraTron games believes the simplistic yet artistic formula that made these title’s such a hit success is the key to giving gamers a beloved puzzle platformer. Drawing inspiration from like-minded titles that came before, developers have rushed to the Kickstarter stage in an attempt to secure funding to bring their own vision to life. Their colorful and visually entertaining 2D project is Threshold, a game in which you take control of mysterious character and dredge your way through a variety of platforming puzzles with a twist.

Threshold follows a gnomish wizard named Hood, as they attempt to cross through a series of large and curious doorways. The subtle twist pertains to which way Hood is facing, and the world will shift and seemingly change seasons, depending on what direction the character is currently pointed towards. This can cause quite the puzzling headache, as some platforms will disappear from view, as others will randomly sprout up out of nowhere. If you pay close attention to the background you can see faint outlines of these hidden ledges. The key to success is mastering “the path” and discovering how you can use the directional shifting to propel you towards your goal. As the game progresses, challenges will become harder, and worlds will become more complex in design. You’ll even find yourself collecting tall keys which must be carried to some doors in order to unlock them.

The developers are focusing heavily on creating a beautiful, attention-grabbing game world. Threshold will feature hand-painted, watercolor environments with an impressive amount of details on both objects and changing backdrops. Each environment is a recognizable theme, stretching between grassy meadows, jagged snowy mountains, and arid deserts. Although these mediums seem simplistic from the outside, QuadraTron has expressed that the world of Threshold is very much a magical place, and will invoke a feeling of whimsy. Just like the world, ambient sounds, and musical elements will change each time Hood changes a direction, fully immersing players into a world that is ever-shifting.

Threshold promises hours of mind-bending gameplay, which will spike in difficulty and complexity as you progress through this imaginative world. Keys and obtainable objects will play a big part in creating some perplexing situations. Grabbing a key in “summer world” and then switching over to “frozen world” to progress towards a summer door may cause the grassy key to ice over, rendering it useless. Developers have promised some unique twists along your journey, and notes that you will have more and more tools at your disposal as you pass through a series of doors. We’re excited to see just how far they can up the challenge factor, and if this release will truly be a solid puzzler.

This interesting and beautifully drawn title is currently in development, but QuadraTron is hopeful that it can secure some Kickstarter funds to fast-track their vision to store shelves. According to development leads, they are intent on nailing down all of the core gameplay elements and complete the artistic design in one year. Threshold still has a long way to go, as its funding is currently siting at $2,125 (at the time of writing this article), out of a total proposed $47,000. Hopefully developers will receive the funding they need to really propel this interesting puzzler into the future, but noting their drive and vision for this game, we can probably expect to see it hit store shelves regardless of the setbacks.