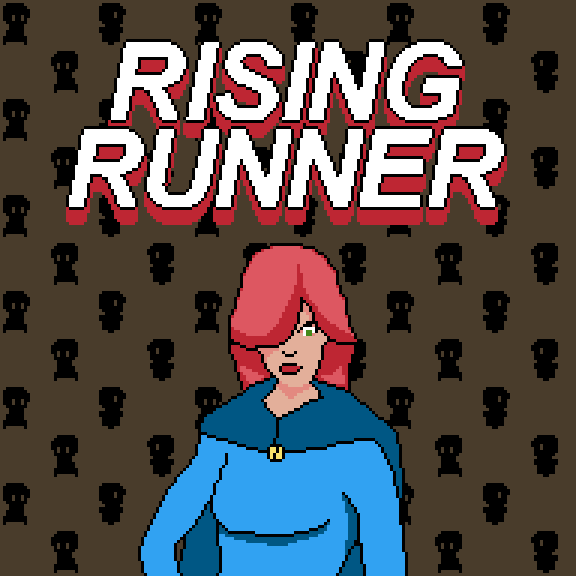 Not to sound like a grouchy old man, but I feel like platformers were much better during the early stages of gaming. There was just something so enthralling about games like Super Mario Bros., Donkey Kong, Mega Man, Adventure Island, and Castlevania that will always be entertaining to me, no matter how advanced gaming becomes. The NES and Super Nintendo had so many memorable sidescrolling and platforming games. Thankfully, there are still developers in the modern age that are attempting to capture the same success that retro releases had during the 1990s. Take, for example, David Williams, who is attempting to leap into the genre with a puzzle platformer named Rising Runner.

Graphically, Rising Runner is everything we could ask for in a retro-inspired platformer. It features two-dimensional, bordered, pixelated levels that possess a very colorful and engaging art aesthetic. The characters and enemies are all miniaturized sprites with a pleasingly smooth pixelated design. They actually manage to pop against the background and obstacles, which are considerably rougher in design and style. The combination crafts a world that looks very similar to the retro releases that inspired it. Visually, you could place Rising Runner next to a row of Super Nintendo games and it would blend right in. That’s a feeling that many indie developers in the modern age attempt to capture.

The retro-inspired similarities don’t stop there. All of the gameplay elements for Rising Runner feel like they came from the 90s. At its core, this release is a platforming-puzzler that will have you pulling switches and unlocking doors while you dodge numerous enemies and dangers. From the outside it doesn’t seem like this title offers much in terms of difficulty, as the puzzles themselves don’t extend much past grabbing a key or toggling a lever. It isn’t all simplistic and mindless progression, though; there are some levels that will test your platforming skills and tease your brain. Sometimes, progressing further isn’t as straightforward as it initially seems. The gameplay feels rewarding, and conquering each level only fuels your desire to finish the game.

There is a small storyline here, which helps to immerse you into the pixelated world. You’ll take control of Anette Harper, an adventurous female protagonist that finds herself racing through purgatory. The heroine has lost her soul to a scary being known as The Endless Sender, and it’s up to her to reclaim herself. Purgatory is a strange place filled with dangers, making her quest a pretty intense affair. Along the way you’ll encounter a slew of otherwordly enemies, like ghosts, skeletons, and other spooky souls. Traps include pits, rattling movers, floating blades, and other classic retro snares. If you want to make it to The Endless Sender and reclaim your soul, you’ll have to push boxes, unlock doors, climb ropes, avoid death, and find hidden switches. There are also numerous collectibles splayed across each level, like coffee mugs, bunches of grapes, and other tasty looking fruits.

Unfortunately, most retro releases don’t offer much in terms of replayabilty. Once you finish a quest you’re generally left with a congratulations screen and a satisfying sense of accomplishment. Rising Runner offers just a smidgen more and actually manages to give us a little bit of replayability by including a powerful level editor. This tool allows you to create your own adventures, complete with enemies, traps, dangers, implemented puzzles, and a variety of backdrops to choose from. It adds a very nice layer of depth, which is hard to find in such simplistic games. Rising Runner also features a great chiptune soundtrack from composer Andy Lemon.

If you’re interested in getting more information about Rising Runner, be sure to check out the dedicated page on Itch.io. You can purchase the full game from that address right now, but the developer is also seeking acceptance on Steam Greenlight to offer the project to dedicated Steam fans.