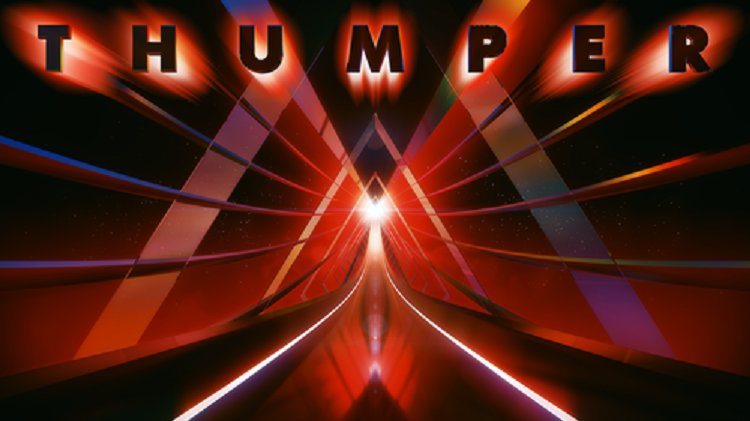 I’ll be the first to admit that I’m a sucker for rhythm games. Music and gaming are two of my favorite things, and I can’t tell you how many hours I’ve spent on titles like Rock Band, Guitar Hero, PaRappa the Rapper, and Rhythm Heaven. I had a fantastic time drudging through the rhythmic dungeons of Crypt of the NecroDancer. I’ve experienced a lot of what the genre has to offer, so trust me when I say that Thumper is a rhythm title like nothing I’ve seen before. This new and interesting indie release is the brain child of Drool, a development crew consisting of Brian Gibson and Marc Flury. 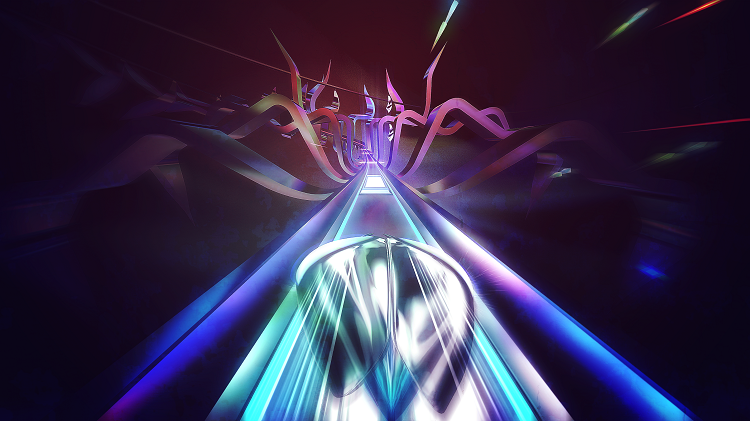 Thumper is best classified as a rhythm-hell, which becomes very apparent as you rocket your way through each level. You’ll take control of a large silver beetle that’s careening through “space” on the tethers of a psychedelic rail system. Bright neon lights and flashes of brilliant white fill the screen as you attempt to maneuver your way through a series of obstacles. The visuals for Thumper are minimalist, yet stunning. The beetle itself is clad in a mirror-shined chrome carapace, which gleams against the deep black backdrops of each level. There are moments when the environment is so calm that the creature appears as a silver bullet, gliding effortlessly across a seemingly never-ending roadway. The art direction does a fantastic job in creating a space that grows in intensity with the music, while still maintaining a general theme throughout.

The gameplay for Thumper is simplistic in design but follows the mantra of “easy to play, hard to master.” Much like Guitar Hero, you’ll find yourself hitting certain notes in rapid succession. Aside from that slight similarity, Thumper is very much its own unique adventure. “Notes” are replaced by obstacles, which you’ll need to avoid at all costs. You’ll find yourself slamming through small gates, sliding through bends on the track, and hopping over small hurdles. All of this must be done quickly and efficiently, as Thumper moves at a very fast pace. You won’t lose the adoration of your fans if you manage to strike a particular obstacle; the penalty for lack of perfection in Thumper is much more severe. One strike will cause you to lose your chrome carapace, leaving your beetle very vulnerable. Another strike in this state and you’ll perish, having to start all the way back at a given checkpoint. Thankfully, the checkpoints aren’t vastly spread out, so you won’t have to revert back too far if you make a mistake. Still, that doesn’t mean that Thumper isn’t difficult — it’s called rhythm-hell for a reason — and things can get very chaotic, very quickly. It’s important to keep focus when gliding through each zone. If you lose your carapace, you’ll be able to regain it by keeping calm and perfecting a certain number of obstacles. You’ll also regain your carapace at the beginning of each level. 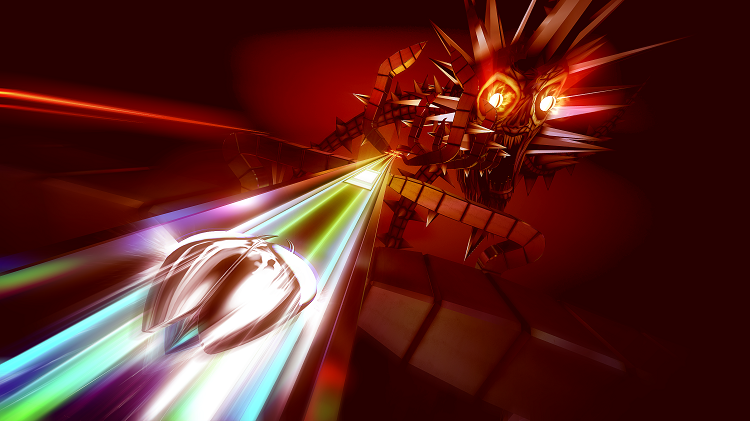 Due to its minimalist design, Thumper features quite a bit of accessibility. As each level progresses, you’ll be able to spot certain cues in the distance. You can see in which direction the upcoming track bends, allowing you to effectively plan for twists and turns. You’ll also see large colored circles appear, hinting at what obstacles to expect. This nifty cue system will allow individuals that are hard of hearing to navigate the world of Thumper without having to rely on its rhythmic soundtrack. Likewise, those that have trouble seeing can make use of the intense musical scores and audio cues to achieve victory. The minimalist color palette makes things easier to navigate for those that suffer from colorblindness or other visual issues.

Brian Gibson worked alongside development teams for titles like Rockband, Guitar Hero, and Amplitude, so he’s had a lot of practice matching gameplay elements with musical scores. Thumper does this flawlessly, creating a journey that relies on heavy beats, wonky sounds, and a fast-paced tempo. You won’t find famous Rock songs or chart toppers here; instead, you’ll be greeted by a variety of audible cues that culminate into an intense musical arrangement. The soundtrack for Thumper is incredibly entertaining, which is a key element when crafting a good rhythm game experience.

The audible ecstasy and visual beauty of Thumper is elevated to new heights by the addition of VR compatibility. Drool has worked alongside Sony’s popular Playstation VR system to craft a virtual reality experience that will send you on a fast-paced trip through the cosmos. Enveloping yourself within the confines of Thumper will bring on a series of emotions that range from visual euphoria to existential dread. If you’re looking for a way to test the capabilities of VR, this is definitely one of the better titles on the market. In fact, VR may make the journey a bit easier. You’ll need to focus heavily on Thumper if you want to conquer all of its levels and boss battles. Drowning out the noise and immersing yourself fully within the game world via VR will help you pay closer attention to the task at hand.

Thumper is out right now for Playstation and Steam. You can also grab a collector’s edition of the release, which includes a game code as well as a physical vinyl soundtrack. If you’re interested in getting more information about Thumper, be sure to check out the dedicated website here. You can also follow the development team Drool on Facebook.