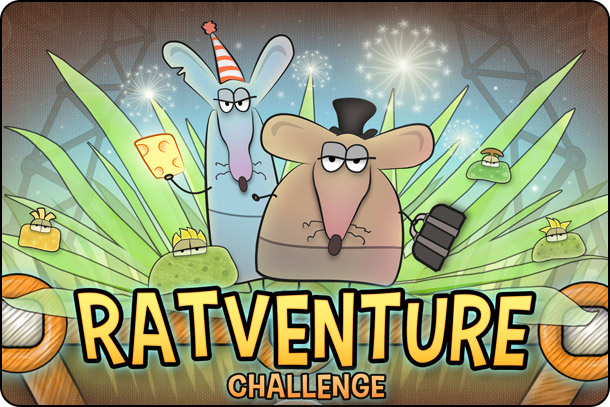 Physics-based puzzle games are one of the most prominent parts of the mobile gaming market. There is something incredibly alluring about calculating paths, and using powers or tools to solve complex problems. Casual and hardcore gamers alike have welcomed these types of games with open arms, and over the years we’ve seen a variety of solid releases, like Cut the Rope, Angry Birds, and World of Goo. Based on the success of these mobile titles, it stands to reason that the physics-based genre will be around well into the future. But why should this fun be limited only to mobile gamers? Estelion is hoping to help remedy that plight by re-releasing one of its mobile brainteasers to the Steam platform.

Ratventure Challenge features two insatiable rats, on a quest to secure as much tasty cheese as possible. These nonchalant looking rodents find themselves surrounded by “yellow gold” in a variety of levels, but massive pits and seemingly impassable objects block keep them from experiencing true cheese nirvana. This is where you come in, armed with the ability to fabricate wooden bridges out of thin air. By connecting these beams and weaving your way around a series of obstacles, you’ll be able to lead these hungry rats across each level, collecting all the goodies as you go. If this style of gameplay seems familiar, it’s because it’s been done before. Games like World of Goo and Bridge Constructor use similar elements, but have their own interesting quirks like weight distribution and unique powers. 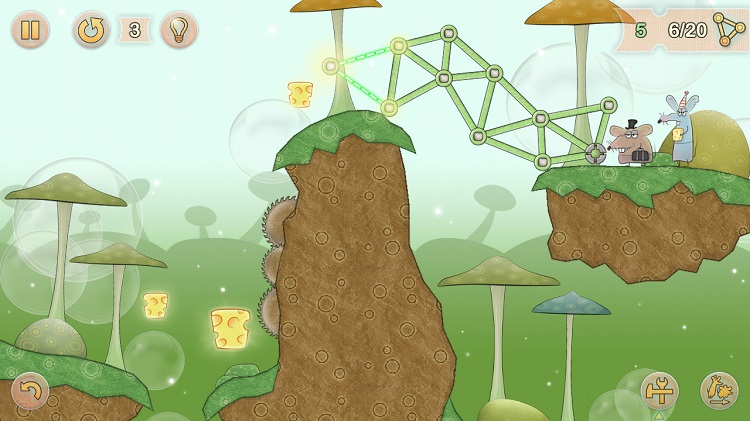 Ratventure has its own unique attributes that help to differentiate it from the rest of the pack. For one, you’ll be able to actually progress your rats across portions of a bridge you’ve already constructed, and then freeze them in place once more. This will allow you to then being placing more pieces and elongating your structure. This is important, because weight distribution actually plays a big part in Ratventure Challenge, and sometimes you’ll need the added weight of your furry friends to help you reach certain areas. Another interesting aspect of this release are the plethora of environmental dangers you’ll face. Spinning blades and heavy rocks that cling to your structures are just a couple of the obstacles you’ll have to overcome if you want to master each of the 24 levels that Ratventure has to offer. The completion of each level will reward you with a possibility of three stars, depending on how fast you complete the level and how many pieces you use to create your structure. That presents one of the minor annoyances in Ratventure, as the game will sometimes pester you to purchase additional moves if you fail a level, via microstransactions. Unfortunately, these purchases are actually quite expensive in relation to what they unlock.

The visuals for Ratventure are simple two-dimensional designs, but offer up some pretty whimsical and entertaining child-like eye candy. The rats themselves seem like something straight out of an old cartoon, with lackluster expressions and a salty demeanor. Their animations are pretty basic, just a very simple looped walk-cycle in which they waddle across the screen together. The environments themselves feature brightly colored cartoon backdrops, splashed with happy flowers and speckled landscapes. The bridge you build has a gentle sway to it, and honestly the physics are pretty top notch, as you’ll notice the wooden structure wobbling to-and-fro, causing you to quickly add pieces of wood here and there to balance it out. All of these elements are underlined by some eerily dangerous looking saw blades and pits of despair. The music and audibles are pretty lackluster, and the simple looped tune can get old pretty quickly, although it’s nothing that ruins the gameplay.

Ratventure Challenge is now available on the Steam platform for $4.99. If you’re curious about getting more information pertaining to the release, be sure to check out the dedicated website here.