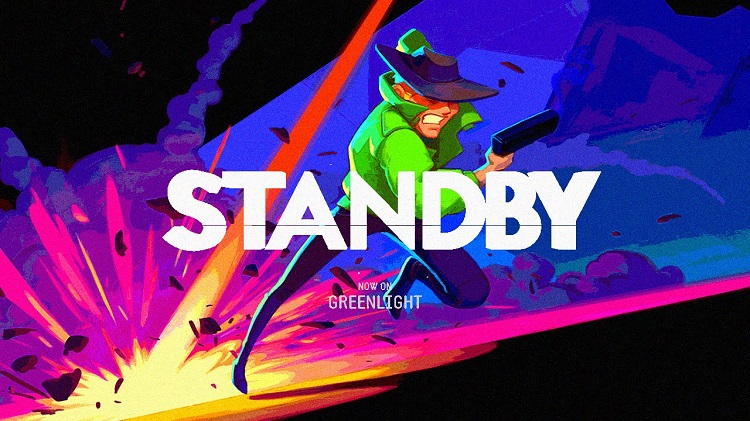 Indie developer NoClip is a veteran when it comes to speedy gameplay. Their first release, Barrier X, was a simplistic “avoid” game in which you piloted a spacecraft moving at mach speeds across a colorful landscape. The minimalistic formula worked rather well, and Barrier X was a fantastic way for the developer to get their name out there and establish a foothold in the industry. Now the group is sliding on scene with a different release, one they hope will have the same general success as their last title. STANDBY is an entirely new experience, but it still manages to keep some of the core elements from Barrier X at its core.

STANDBY is within a completely different genre, tossing away the chains of Wipeout-esque gameplay in favor of intense platforming action. Gone is the brightly-colored white spaceship, replaced by a green-suited character in a wide-brimmed hat. At its roots, STANDBY is still very much a spiritual successor to Barrier X. It features the same style of overly-colorful minimalistic visuals, but presents them in a much better way. Speed is still a core element, but gameplay now contains an overlying layer of tactics. You’ll find yourself racing as fast as possible through each level, but it won’t be as simple as tapping left or right to avoid obstacles this time.

The gameplay for STANDBY is simplistic and unforgiving. It’s comparable to releases like Dustforce and Super Meat Boy, with a difficulty spike that is closer to the latter. You’ll need to keep your wits about you as you run, jump, slide, and shoot through an array of neon hazards. The basics have you avoiding red-colored sections of the environment, while blasting through yellow barrier blocks, and powering up on blue spaces. When you first start up STANDBY, it’s as simple as making a few jumps here and there; as each level progresses, however, so does the chaos. Later on, you’ll find yourself faced with tedious levels brimming with obstacles and power-ups. You’ll need to use rather precise jumps and slides to conquer your environment, with perfect placement as the key catalyst to avoid certain doom.

Visually, STANDBY looks like a rave. Brightly colored neon lights flicker and pulsate around every turn. The foreground is a stark black to help accentuate a rather entertaining color pallet, while the backgrounds feature a mixture of basic, darker tones. This release is a lot of fun to look at, but it can be rather hard to see much detail when you’re racing for your life. All of this eye candy is underlined by a catchy and energetic soundtrack. Slick, glitchy, electronic beats will keep you amped up through each level. Developers did a fantastic job meshing together a soundtrack that really ties together all of the visual and gameplay elements.

There is no word yet on what to expect as a price point for STANDBY, but Barrier X was a very low-priced affair at $2.99. There is no reason to expect STANDBY to fetch much more than that, although it does boast quite a bit of gameplay, from what developers are telling us. There will be over 50 different levels to conquer, a speedrun mode to increase replayability, and a global leaderboard for those of you looking to dominate any real-world competition. Overall, that’s a pretty hefty amount of content for such a simplistic indie release.

If you’re interested in getting more information regarding STANDBY, or want to grab a free demo, you can check out the dedicated website here. You can also follow the publisher on Facebook for any future updates. STANDBY has already been accepted by Steam’s popular Greenlight program and will be available for purchase on Steam by mid-October.