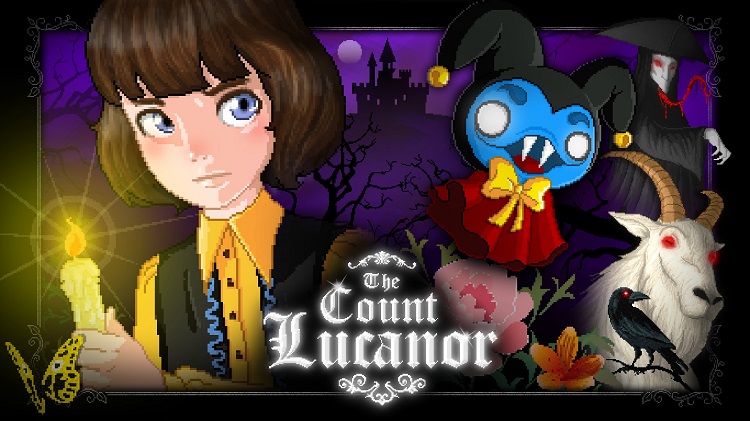 Puzzles, horror, and a great story are waiting in ‘The Count Lucanor’

A good story is one of the most satisfying things in the gaming world. Solid gameplay and beautiful visuals can be rewarding in their own right, but most of my best gaming memories stem from the adventures I’ve had. In fact, great storytelling can actually make up for a variety of shortcomings. It’s easy for critics and the like to nitpick graphics and minor gameplay quirks, but a powerful tale of adventure and intrigue can turn an “okay” game into a spectacular cult classic. Undertale is a fantastic example of this truth, as it features bare-bones graphical elements and semi-simplistic two-dimensional gameplay elements. Undertale has gained a massive following thanks to its unique characters and entertaining story arc. It’s for this reason that I was so intrigued by The Count Lucanor, a new indie release from developer Baroque Decay Games.

If you weren’t aware of The Count Lucanor, you might assume it was created long ago. The title features heavily retro-styled graphics, featuring pixelated characters and backgrounds. It’s the type of game you’d see available on the original NES, although it does manage to squeeze in a lot of visual depth through shading and lighting. Developers also did a great job in bringing their animations into the 21st century. Although the animated style is meant to mimic titles of the past, it features impressive movement and flow. Those of you who appreciate retro visuals will find a lot of interesting characters, creatures, and locations to look at.

If gameplay is more your thing, The Count Lucanor features an interesting gameplay element that blends together top-down two-dimensional movement and puzzle-solving. It’s all very Legend of Zelda meets the macabre, but you won’t find yourself equipped with an array of enemy-thrashing tools. Instead, you’re equipped primarily with candles, gold coins, puzzle objects, and food items. Food can be used to replenish health, should you find yourself running headfirst into traps or enemies. Gold coins are very scarce throughout the game world, which is rough since they’re primarily used to purchase items and save your game. Each save at the main castle fountain will cost one coin, which adds a nice layer of difficulty by forcing you to decide when it’s the best possible time to save your progress. Candles are your best friend, as the castle is mired in a deep darkness. Candles can be carried, used to light other objects, or set on the ground to help keep enemies and darkness at bay. Placing candles becomes a very important aspect to The Count Lucanor. You won’t be able to defeat your foes with brute strength, so you’ll need to have your wits about you in order to run and hide from any danger.

This brings us to the story, which is in my opinion, the best part of this release. You’ll play as Hans, a young boy who tires of being poor. He lives alone with his mother after an incident in which his father left to pursue a better life. The day of his birthday proves to be the last straw. When Hans realizes that he will receive no toys or sweets for his special day, he leaves his house in a fit of anger. Knowing she cannot stop him, Hans’ mother gives him some items and allows him to venture out on his own. All seems well for the young boy as he explores the area surrounding his home, but as night falls, things take a very different turn. In a page straight from Silent Hill, Hans finds himself surrounded by blood-smeared walkways and terrifying demonic-like animals. The friendly goats that he’d seen during the day now stand on two hooves and feature gaping maws filled with razor-sharp teeth.

It is in this freakish nightmare world that Hans begins his true journey. You will meet an interesting kobold that offers Hans a seat as the new Count Lucanor, a title that offers a massive castle and all of the wild riches that come with it. It’s a deal that is too sweet for young Hans, who is still seething from living a poor lifestyle for so long. The kobold offers a simple test, in which you must guess his name. This is made a little easier by adventuring into the dark reaches of the castle, where you will find a series of letters hidden inside elaborate chests. Once all of the letters are found, you’ll have the opportunity to use your gained knowledge of the castle and its history to take a guess at the mysterious creature’s name. This isn’t nearly as easy as it sounds.

The castle is a nightmarish playground filled with dangerous traps, creepy enemies, and somewhat-complex puzzles. Along your journey you will meet an interesting cast of characters, each featuring their own unique predicaments and reasoning for being within the mysterious castle. Through conversation, strange clues, and general exploration, you’ll be able to unlock the secrets of the estate and bring an end to Hans’ terrifying journey. You’ll need to be careful as you make decisions, as key moments in the story will have a direct affect on the end game. There are five total endings to discover in The Count Lucanor, so you may find yourself replaying this release just to make varying choices throughout the quest.

This is a fantastic indie release, although I am a little disappointed to that it wasn’t a bit longer. Even with the different endings, you may find yourself at the end of the journey before you know it. I rather enjoyed the lack of saving, but I imagine it could be annoying to some. Still, The Count Lucanor features a great fable-like story, a cavalcade of interesting characters, and a great horror atmosphere that can be rather unsettling at times. If you’re interested in getting more information regarding this release, be sure to check out the dedicated website here. If you’re itching to play, you can grab this title right now on Steam. Be sure to also follow Baroque Decay Games on Twitter and Tumblr for any updates.