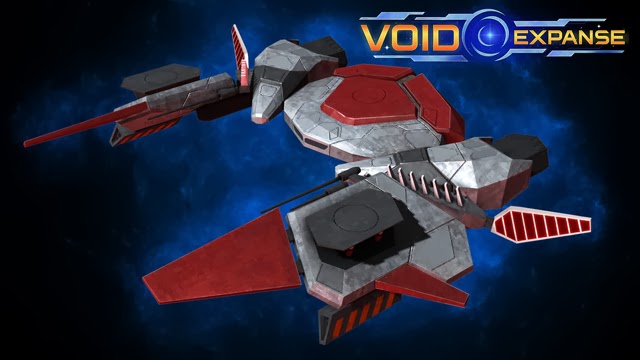 Space is just the natural setting for large-scale sandbox-style games, given the inherent characteristics of space (i.e. its relative largeness, and the like). Throw in a futuristic setting and a little intrigue, and you’ve got yourself a good hook, or VoidExpanse, depending on where you look.

VoidExpanse is an open-world space pseudo-MMO, developed by Atomic Torch studios, and is currently in an Early Access Alpha.

As a recent taker-to-the-stars, you explore a vast, procedurally-generated world, mining asteroids for minerals, trading between merchants and stations, battling pirates, and doing odd jobs for various other spacegoers. The game generally plays out in a top-down view on a 2-d plane, and right away you’ll realize that VoidExpanse isn’t quite what you’re used to. 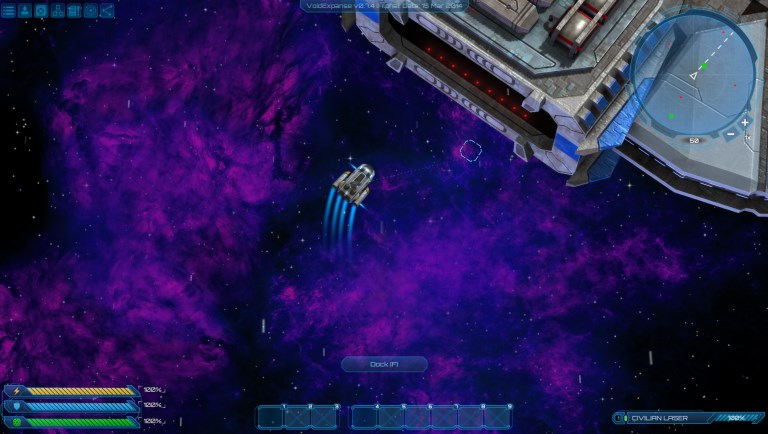 Upon starting a new game, you’re given the option to customize your galaxy. Currently, you can only input a seed and change the size of the space you create, but as time goes on, it seems as though more options will be implemented. You take control of a random rural planetgoer, who has taken to the stars in a very basic civilian shuttle. You can customize an avatar for yourself, but for the moment, get used to hilariously awkward photos of douchey looking guys in aviators, for the time being. The system uses a simple modular system for determining your appearance, so things can occasionally appear…off. You’ll appear next to a station, and are instructed to seek out a man named One-Eyed Joe for help. 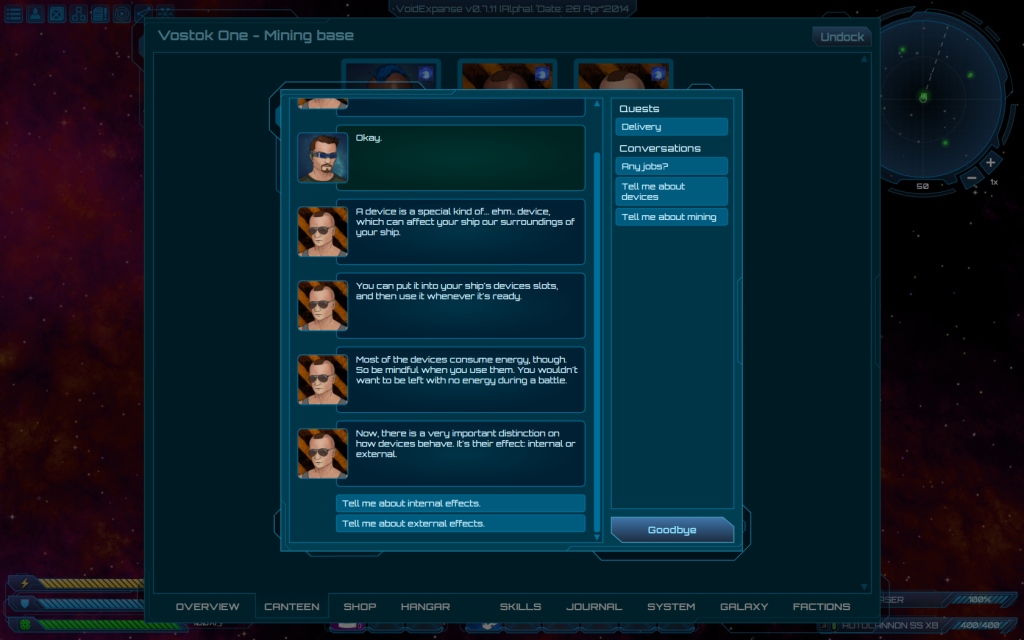 Now, I’m just taking a stab here, but flying a spaceship is generally considered a hard thing to do. The game operates on the old “tank control” principal, you have a thrust and reverse key, and two keys to rotate your ship, as well as the ability to strafe. This is all accompanied by a basic reticle that follows your mouse cursor and is used to target objects and other ships. I flew a few laps around the station to get a feel for things, and was immediately struck by how sluggish and slow everything felt, my ship wasn’t terribly responsive and I didn’t feel like I moved particularly quickly. Even the mounted laser turret on my ship tracked slowly, and couldn’t seem to make up its mind on where to face. I found this not to be long-lived, however.

Soon, I flew in front of the docking bay to the station, which pops up your general context-sensitive button prompt. Navigating the station is a simple matter, basic static menus with navigation toggles at the bottom. You can refuel and repair your ship, visit a shop to pick up new modules and equipment, visit the canteen for quests or information, modify your ship in the hangar, learn new skills, or reference various maps and acquire other information. 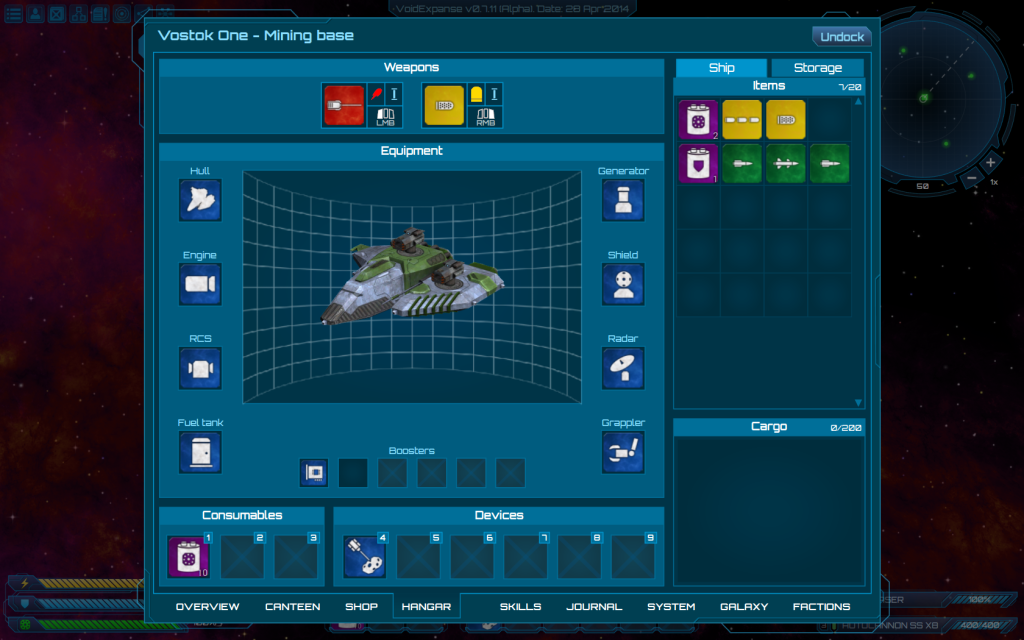 I was immediately intrigued upon visiting the shop at how many items were available: it’s not a lot quite yet, but for a game this early there are eight different types of hull equipment that can affect your energy pool, the power of your shields, how fast you move, how maneuverable you are, your fuel capacity or radar strength, among other things. Once you start visiting multiple stations, you’ll find lots of variations of these items to let you combat that sluggish feeling you’ll have when you first start the game up. Do you want to make a ship that’s quick and responsive for combat? You can do that. You could make a hulking, armored transport with a large cargo bay for mining, or a ship that specializes in navigating around enemy pirates and not appearing on radar, if that’s your thing.

After a simple mission from One-Eyed Joe, you’ll get a new ship frame, and you’re pretty much cast out into the galaxy at large. Joe fills you in on a little history, if you ask, providing the context for the game. Humans developed fancy jumpgate technology that let them leap around the universe at faster-than-light speeds. Eventually, they encountered alien life, and things went, alright, or so it sounds. Then, humanity encountered a strange hybrid race of aliens that integrated technology into their bodies. There was some conflict, but the human felt they were superior, and planned to warp a fleet in to wipe out the diminutive race after the scuffle. Three years later, after a jumpgate had been placed, a fleet was prepared to jump through, when an unexpectedly advanced Xengatarn fleet used the jumpgate themselves and began a crusade against mankind. Eventually, Void Expanse protocols were initiated, and all jumpgates in inhabited zones were destroyed, limiting the Xengatarn threat, for the time being. 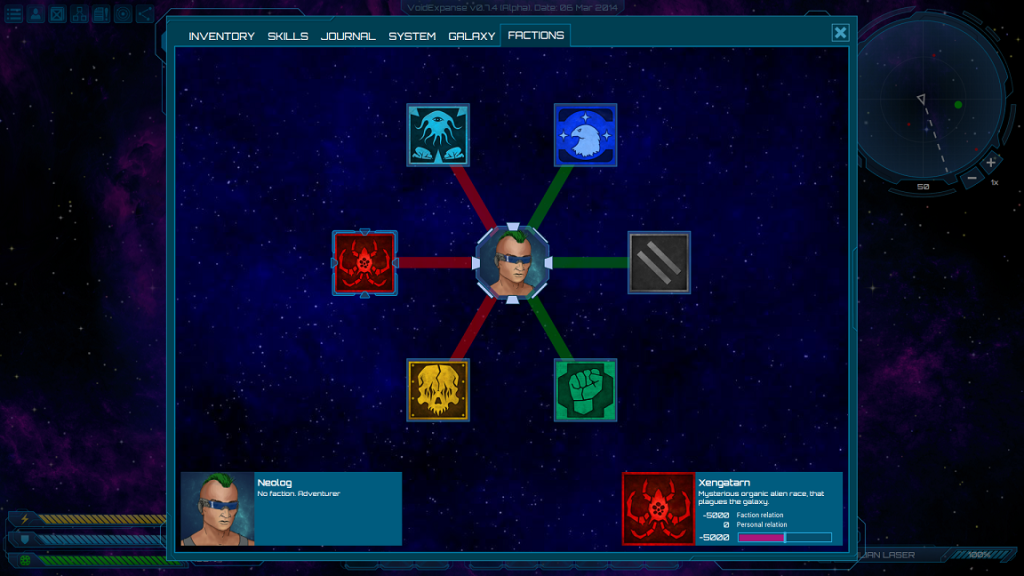 Thus far, the plot is barebones, you’ll mostly run fetch quests for random people on the stations. Some of the story elements listed above don’t even seem to be reflected in the gameplay yet (there’s a large, red Xengatarn mass of stars on my galaxy map that appears to be connected by jumpgates…haven’t warped out that far yet, though).

Thus, at the moment, the gameplay is very basic, and only somewhat indicative of what the final product will entail. There’s plenty of combat to be had, but the tank controls on your ship make proper targeting difficult. Every turret hardpoint on a ship has a set rotation speed and range, requiring your facing and positioning to be somewhat precise to land your shots. This is at once a troubling yet intriguing affair to me: I like the idea that you can’t target your enemies with FPS-speed twitch reflexes and precision, it requires a concerted effort between your keyboard hand for facing and your mouse hand for turret direction. This is exacerbated by the fact that several weapons in the game exert force on your ship, altering your position and facing as you take hits. Once I’d bought a ship suited for combat, and improved my skills to allow for more maneuverability, however, I was making quick work of pirates, but the game is far from a balancing place just yet. The combat is less tactical than, say FTL’s combat was, but does require more thought than it might outwardly appear. 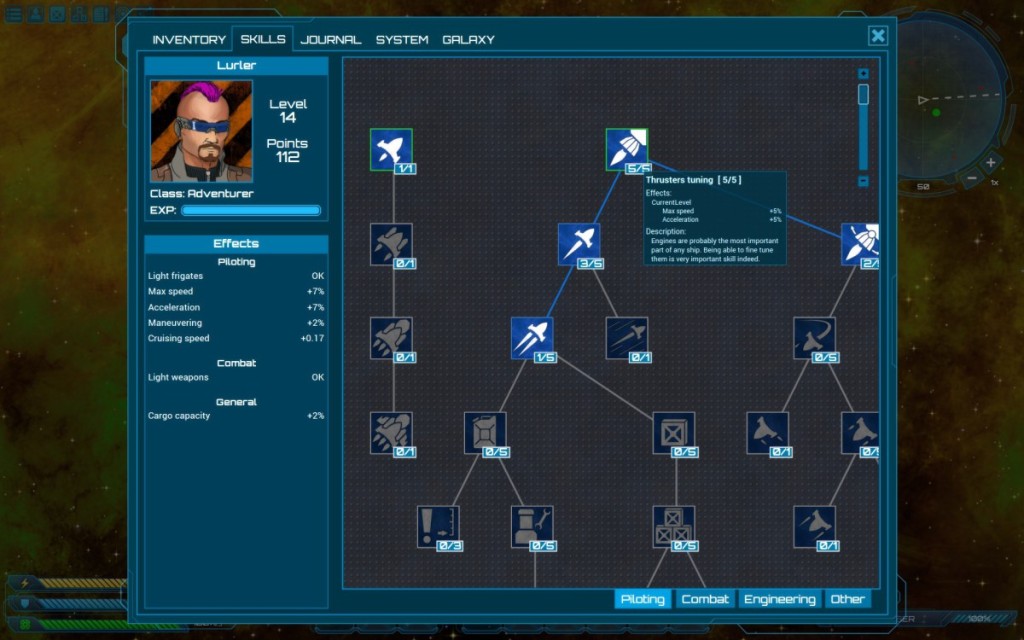 There are skills to explore to suit your various needs as well, all with subtle alterations to a very wide range of your abilities. You can learn how to better tune your thrusters, allowing for higher turning speed, maximize your engine outputs for better top speed, increase your fuel efficiency, or even learn to better pack cargo for additional space and haggle for better prices when selling things on stations.

It’s clear the Atomic Torch wants this to be a major economic sim, as well. Item values vary from station to station, and there’s even a Trader class to select when you make your character. Thus far, I’m not certain trading can be viable in isolation—you only seem to gain experience from mining and killing thus far.

However, as this is an early alpha, there are tons of systems that aren’t yet implemented, much of the dialogue is rushed and silly, and I can’t go for more than ten or twenty minutes before my game invariably crashes for some reason. VoidExpanse certainly has potential. If the variety of different ways a ship can be put together at this point is any indicator, players will have a lot of freedom in how they approach their own personal exploration of the game space. I’ll be sticking with this one as updates come in.

As a point of interest, the game is also multiplayer enabled right from the start, you can create a persistent worlds (randomly generate, just like the single-player games), however this world can house up to 64 occupants at a time, and is persistent for all on the world. I would have loved to see how the game feels with others flying about, but sadly I was the only one on the server when I gave it a try, take of that what you will.

You can check out a trailer for the game below. It’s currently available in early access for PC, but Mac and Linux versions are in the works. If you’re interested in getting involved, you can hop over to the Atomic Torch store and grab a copy for $9.99, which will include the game, a Steam key (if they make it onto Steam), early access, and that special feeling that comes when you donate to a worthy indie cause.