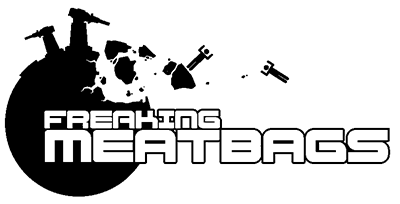 Many of us know the feeling: our teachers or bosses are making crazy demands, you make a simple mistake and pay a cost far more severe. We’ve become robots, trained to perform the same tasks day in and out. 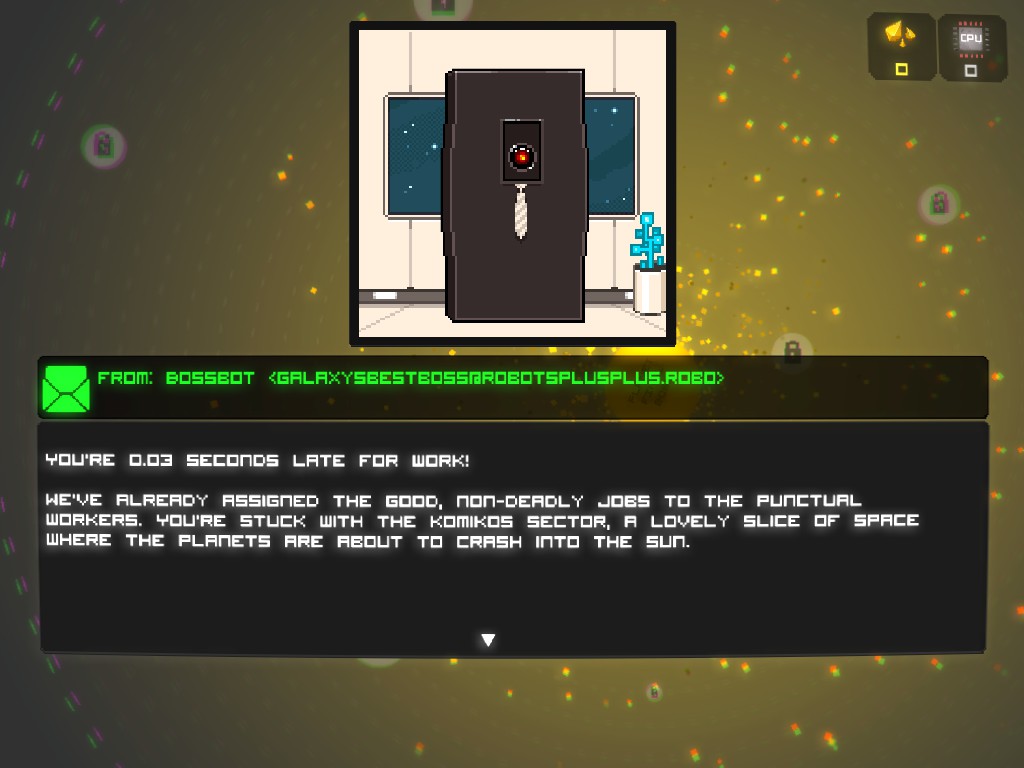 Don’t let that stop you from taking a look at Freaking Meatbags, a game by Wild Factor Studios. Blending characteristics of both RTS and tower defense games, along with a few other genre-bending mechanics to make an intriguing game wrapped in a hilarious cartoon veneer.

You play as Chip, a worker bot who arrived for work 0.03 seconds late. Since all the good work assignments had been given out, you end up stuck in a solar system that is slowly being consumed by its own sun.

Your task is to pick up all the rocks from the various planets’ surfaces. There are also these strange, squishy creatures called “humans” on these planets. Your boss bot wants these creatures preserves, his wife finds them cute. 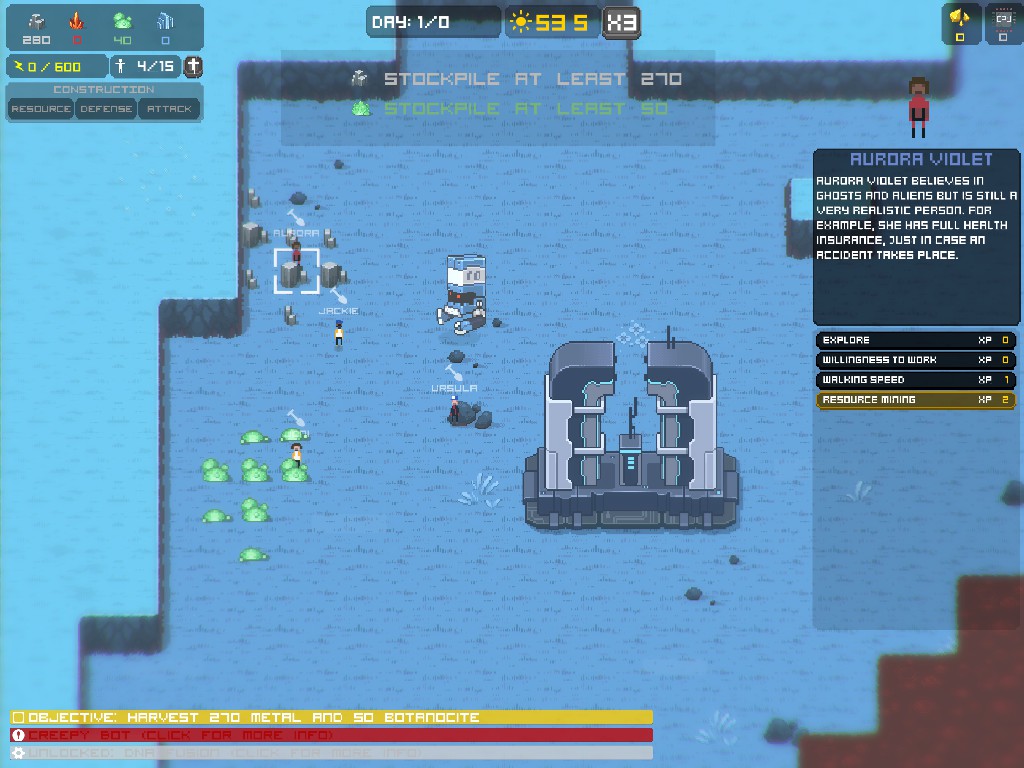 Upon arrival, you find that the planets are inhabited by strange killer robots, as well. You end up forcing the humans to collect the rocks for you, while you protect them from these killer robots. Simple.

Sort of. The strange meatbags aren’t to most willing to work. The killer robots range from merely pesky to huge and utterly dangerous. You’ll need to use some (ahem…all) of the rocks you’ve been picking up to construct various structures to help you gather materials and keep your humans alive.

The game houses an unexpected variety in stage objectives. Many of the stages fall under a tower defense style. During the day, you have an opportunity to explore the planet’s surface, identify the locations of resources, command your subjugated humans in various ways, and construct various buildings and defenses.

As night falls, the action continues with a distinct change: waves of killer robots of various kinds assault your base from difference directions. Not only will they attack your main base building, but they’ll kill anything sufficiently soft that gets in their way, as well. 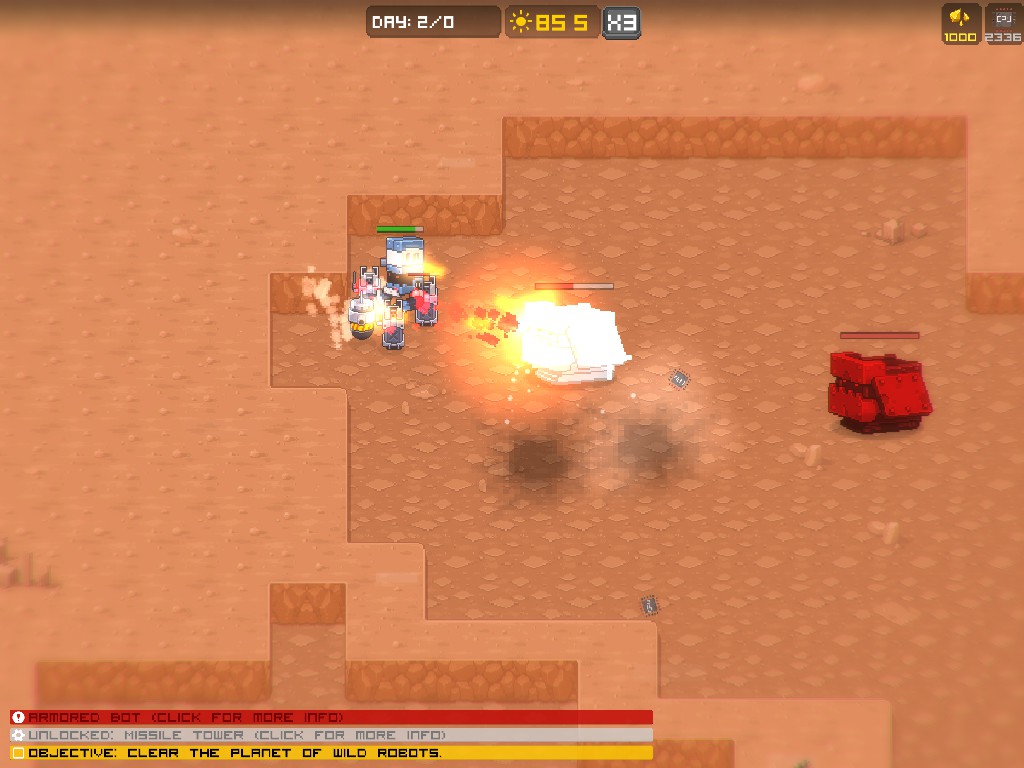 This is all wonderfully simple in execution. Your main base drops in a specific spot. You use the standard WASD keys to move Chip around. Left-click to select a human, and right-click to issue that human various commands. As your humans gather any of four different materials, you can build defense towers, useful buildings, or walls to stop or redirect hostiles. These are all presented through a smooth and minimalist UI that is unobtrusive and intuitive, though not without the occasional bug here and there. 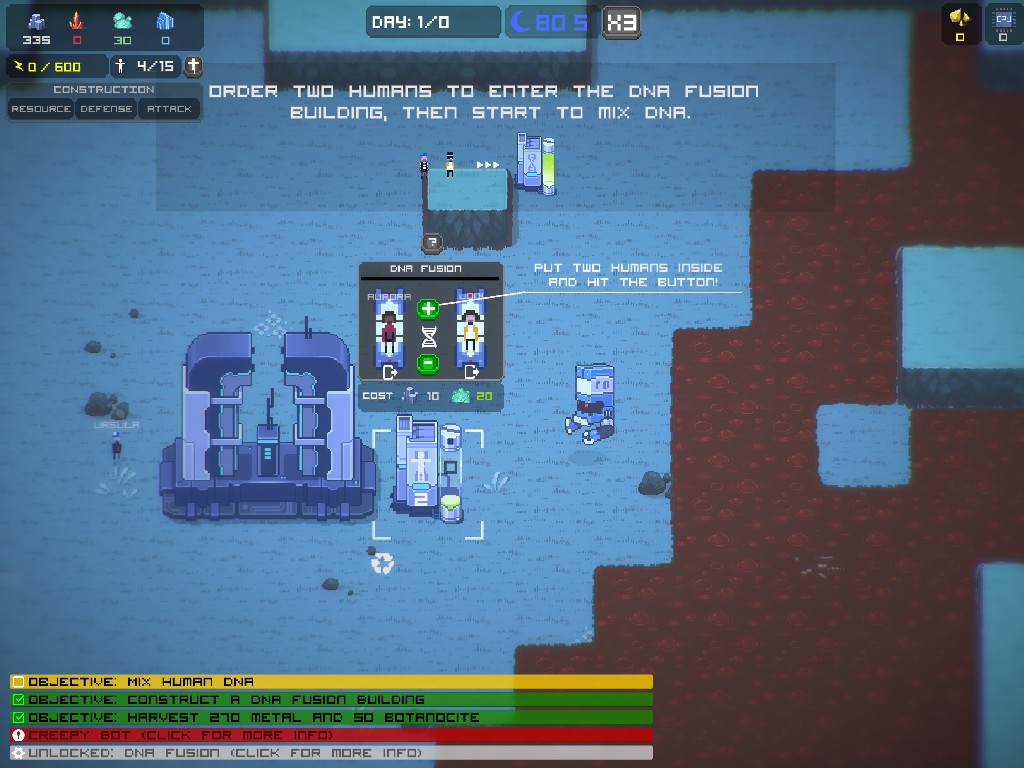 One of the more intriguing features of the game is combining and modifying the DNA of your meatbags in order to enhance their effectiveness, create a larger workforce, or give them entirely new abilities altogether. All the beings you encounter (that aren’t killer robots) have a set of abilities in which they can gain experience. Humans, for instance, have stats like willingness to work, walking speed, and exploration. Low willingness to work might result in a human daydreaming on the job or trying to start conversations with the others, in which case your presence as a robot overlord is required to set them straight.

Other beings have wholly different sets of abilities, like creatures with laser eyes or that explode on contact with enemies. The laser-eye aliens can’t gather resources, for instance, but can serve as mobile defenses, or even an assault force. By mixing the DNA of these aliens with your meatbags, you can have humans with laser eyes, that can also collect resources and the like.

It gets to be really interesting, creating multifunction creatures to do your bidding in the different levels. You’re not always defending your base against waves of killer robots. You might need to explore crashed starships, which requires that you create beings with offensive capabilities, as chip inherently has none. Some missions task Chip with clearing a planet of hostile forces on his own, in which case he collects drones that offer him dual-stick style point-and-shoot abilities.

The game’s progression is utterly linear at this point. You move from the outermost ring of the solar system inward, moving steadily toward the ominous “PLANET FINAL BOSS” that appears in the center. Completing planets nets you gold and CPUs, with bonuses awarded for exemplary performance. You can spend gold at a wandering merchant ship for structure and…er…”personnel” upgrades, and CPUs for direct upgrades to Chip. 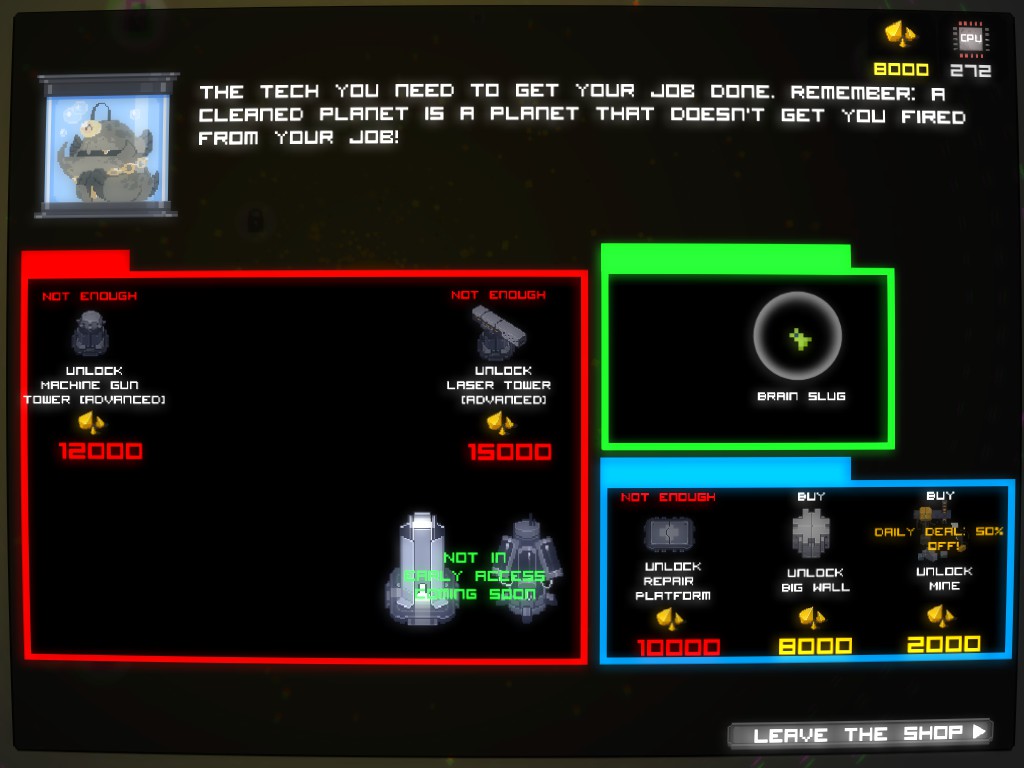 You might buy an advanced machine gun turret that offers better upgrades in the field, or a mine that increases resource gathering speed for any resources it’s built over. Or you could get a brain slug that maxes out a human’s obedience, or a cyborg suit that removes all their personality, but makes them completely willing to work and allows them to repair structures. 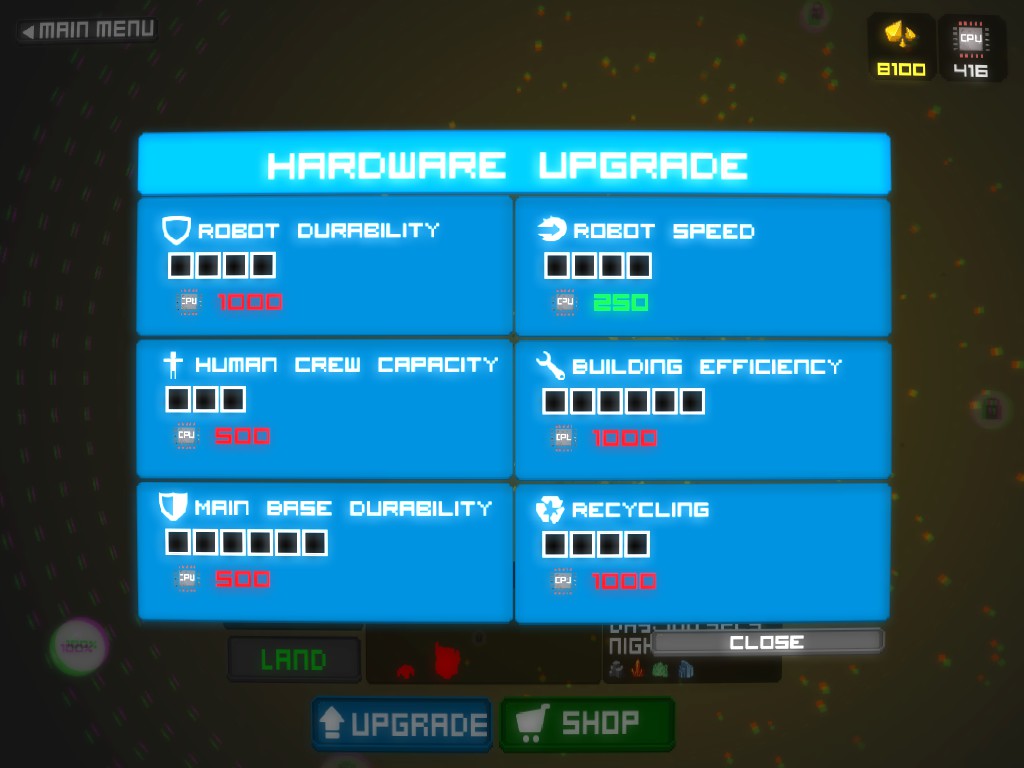 The game features the sort of crisp, sixteen-bit style that has become so popular among the indie scene of late, though it’s executed fairly well. Robots and structures have basic animations and clean lines, as to buildings and environments, while the meatbags have an entertaining modular super pixellated look to them that offers just enough variety to render them as I feel a robot master might see them: just a bunch of creatures to to my bidding. 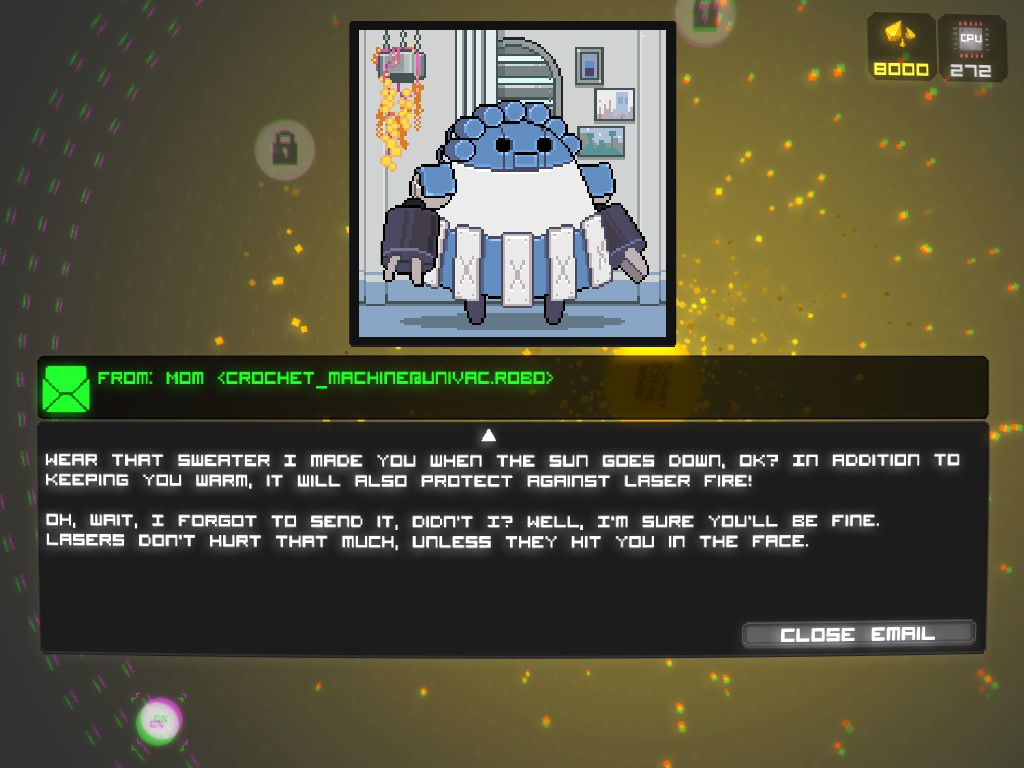 The game is remarkably content-complete for an early access title, I think. I haven’t encountered a lot of bugs or other issues, and there’s only a few items displayed in the store that are crossed out as “unavailable in early access.” The game doesn’t suffer from a terrible lot of balance issues, the steady stream of unlocked structures and the like keeps things moving forward, and so far I haven’t encountered too many difficulty spikes.

I do hope that this means that the early access period for the game allows them to simply implement more. I haven’t finished it, by any stretch, but I was cool quarter of the way through the game in the stretch of an hour and a half, maybe. I know that there are plans to include more meatbag types to create, more structures to be implemented, and at least a few more planets. There are plans to include a map editor, as well, so that could mean a theoretically infinite amount of new content could be available if the game takes off.

And I really hope it does. The game is curiously addicting without being drab about the whole thing like so many other tower defense games. It feels like it doesn’t crutch on a singular gimmick to get its point across; it could be a solid game without the DNA fusion, for instance. It’s worth a look, check it out on steam for a mere $9.99.