Prepare for gorgeous visuals and solid local coop, Trine 3: The Artifacts of Power is on the way

There is nothing like sitting down with a beautiful art-driven game, especially one that offers up entertaining gameplay elements and an enjoyable storyline to follow. The Trine franchise has been entertaining gamers since 2009, when its original release hit store shelves. The title offered up some refreshing gameplay elements, forcing players to swap between multiple characters to progress through complex levels. The rhetoric between characters, the catchy music, and engaging gameplay arguably play second fiddle to the gorgeous character designs and environments. Frozenbyte’s engaging series has developed quite the cult following in the past few years, and the company is hoping to take their fantasy side-scrolling franchise to new heights with the upcoming release of Trine 3: The Artifacts of Power. 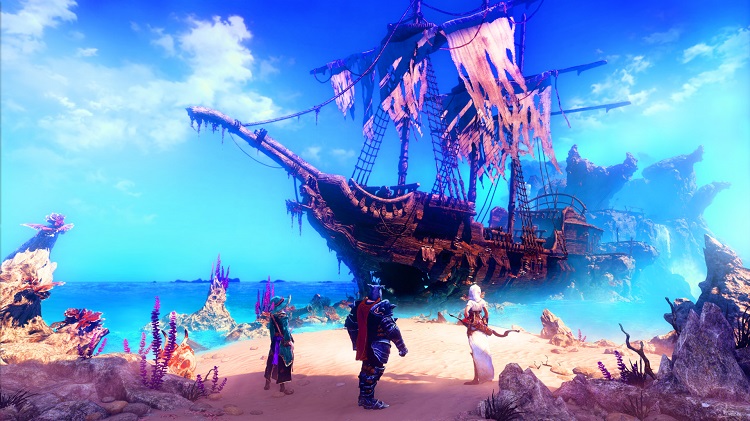 It might be a little bit before Frozenbyte goes into great detail about their newest title, but the group was gracious enough to release a teaser trailer for the next installment. The graphical goodness we’ve come to expect is back in full force, and looking quite polished this time around. It seems that the art department went all out this time around, creating a visual playground that seemingly puts the first two title’s to shame. The eye candy for Trine 3 has seen a serious face lift, offering up a linear experience, enveloped in a simultaneous two-dimensional/three-dimensional package with beautiful hand painted backgrounds. From the small amount of screenshots we’ve seen so far, the adventure in Trine 3 will span many different locales, including beaches with pirate ships, dense jungle areas, ancient temples, and pathways which span across forested mountaintops. There is an immense amount of detail that has gone into each environment, and the character designs are improved as well, with smoother models and animations all around.

Gameplay appears to be very much unchanged, which is a good thing considering how monumentally entertaining the original release’s were. You’ll still find yourself switching back and forth between a rogue, warrior, and mage in order to solve puzzles and traverse some very unforgiving terrain.

Like the originals, the warrior will make use of his brute melee strength and powerful shield to fight off hordes of enemies. He can even use the rounded guard to “float” through the air for a short time, much like a small parachute, allowing him to leap large gaps. The mage, while constitutionally fragile, is necessary for moving blocks onto switches, and creating walkways out of thin air. His aid is fundamental for solving some of the more complex puzzles littered throughout the journey. The rogue plays a large part in traversing to areas that are seemingly out of reach, using her grappling hook to swing effortlessly through the air. Her acrobatic skills will allow you to uncover secrets, and can get you across massive rifts in the ground. One unique addition to the gameplay is the ability to move up and down into the foreground. Until this upcoming title, Trine has simply been a side-scrolling affair, but Trine 3 allows you to move at points freely between the background and foreground, adding a small layer of 3D to the game and making for some interesting twists to boss fights and puzzles.

According to developers, they’ve been working hard on Trine 3 for quite some time now. It will be very interesting to see how this potential powerhouse stacks up against other 2015 Indie gems like Rime and Mighty No. 9. The release is slated to drop sometime this year (2015) and will hit Windows-based PC’s first. Other platforms are expected to follow, and Frozenbtye even hinted that Trine 3 may eventually release on Nintendo’s Wii-U, although judging by how crisp the visuals are, we may see a graphically toned-down version. If you’re interested in keeping up with developer updates, or getting more information on Trine 3: The Artifacts of Power, be sure to check out the dedicated website here.