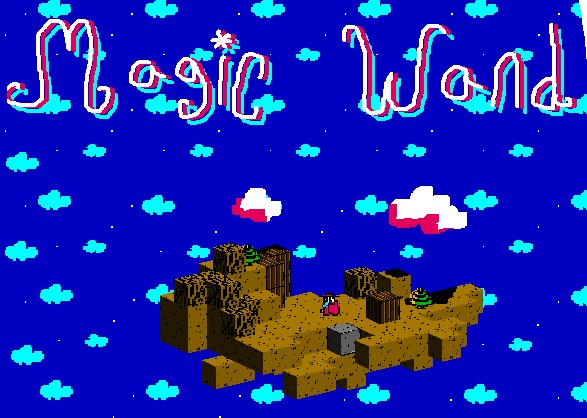 Let’s be honest, a lot of JRPGs are pretty weird in their own right. Some of them feature complex storylines that unfold like a Shakespeare play out of chronological order. Some are filled to the brim with oddball creatures and locations (we’re looking at you, Poo Snakes from Blue Dragon). Still, we love them, and the there is something rather rewarding about the gameplay elements of a traditional JRPG. But there is one developer that is really pushing the envelope when it comes to hard-to-understand and strangely-driven content within this particular genre.  Thecatamites is holding no peculiar punches with their indie release, Magic Wand.

This curious adventure centers around Radiget, a lumbering crocodile swordsman complete with an oversized hat and flowing robes. Our reptile friend finds himself deep within a barren magical world, filled to the brim with mysterious creatures and elaborate ruins. At least, these are the themes we find apparent in Magic Wand. To be frank, the game doesn’t give you a clear-cut picture of your motive or purpose. It’s up to you to sift through the gameplay and mounds of accent-laden text to find any type of story. It’s present, but fragmented, which oddly enough adds to the unique charm this title exudes.

Gameplay is overly simplistic, but may appear complex at times. You move in a very awkward manner. The entire world seems two-dimensional, but a quick change in camera angle showcases a lush geometrical 3D landscape. It all looks like a wild and wacky version of Q-Bert, with more talking and slightly less jumping. You can use your powerful crocodile limbs to leap up mountainsides made of cubes, or slash through your enemies with magic. There are many friends and foes alike in the world of Magic Wand, and it isn’t so clear which alignment a creature may take. You will find yourself easing up to anyone you meet with your sword at the ready. Those who are friendly can be conversed with, while enemies may lunge at Radiget in an attempt to topple the mighty croc.

The land of Magic Wand makes little sense when you first boot up this indie release. The colors are sickeningly bright, and everything is geometrically simplistic in design. Some areas within the game are filled to the brim with oddly shaped trees, multicolored cubes, and an array of useless trinkets. It’s hard to be visually bored with Magic Wand, but it is important to note that some areas are almost painful to the eyes. All of these wacky visuals are underlined by a wonderfully upbeat retro-inspired soundtrack.

If you’re searching for a purpose within Magic Wand, you’ll probably have a hard time finding it. Although after a an hour or so you may slowly piece together small clips from conversations and uncover a speck of storyline. At its core, Magic Wand is best defined as a narrative JRPG. There are no experience bars, no character developments, and no intense combat tactics. You can break pots and slice down enemies, but apart from that you’re simply along for the ride. You’ll spend most of your time jumping up and down platforms, while talking to an array of curious characters.

What makes Magic Wand an enjoyable experience is the downright weird conversations and situations you’ll find yourself in. Characters seemingly spout dribble at times, and there are moments when you’ll enter an area that has no other purpose than to incite a chuckle or boggle your mind. The developer did a great job in creating a narrative that is so outlandish that it breeds curiosity. You’ll find yourself wanting more, and in a hurry to discover what’s around the next corner. Each area seems like an entirely new ride, and that helps to keep the adventure fresh and enthralling.

If you’re curious about getting more information about this strange game, be sure to check out the dedicated website here. You can pick up a copy of Magic Wand right now for $5.50 from Itch.io. If you want to keep up with Thecatamites, or see other insane projects the developer has created, be sure to check out their website here. You can also follow them on Twitter for news about upcoming projects.