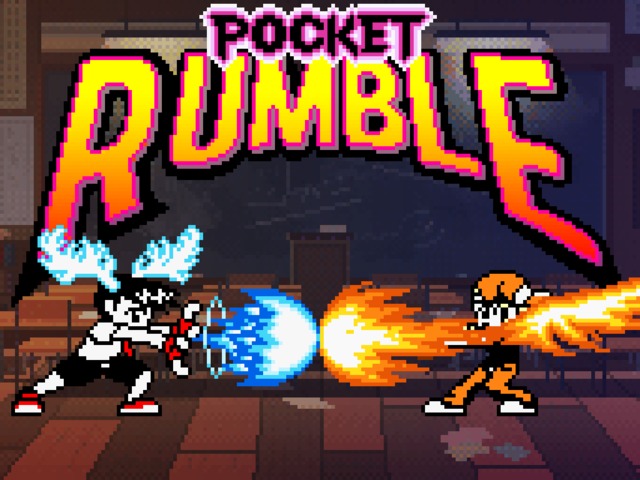 Not A Fighting Game Expert? ‘Pocket Rumble’ Is For You!

It’s not your fault. Fighting games require a precision that most other games simply cannot demand by virtue of their nature. There’s a great feeling that comes with nailing a quick shot down the scope of a sniper rifle, or effortlessly clearing a room full of demons with a well-executed set of attacks in an action game, but the level of precision, speed, and study of a character’s abilities that a fighting game match demands to be truly impressive is something that is often beyond the reach of most players.

Pocket Rumble seeks to buck that trend, utilizing a variety of systems to render any player that desires it a tournament-class level of play and ability.

The game comes from a group of long-time fighting game fans over at Cardboard Robot Games, as the game is heavily inspired by the old SNK fighters that popped on the now-defunct Neo-Geo Pocket.

Where so many games in the genre bear a heavy focus on execution and rote memorization or potentially complex inputs, Pocket Rumble does away with quarter-circles and the like in favor of a simplified control scheme that ensures simple use of special attacks. Rather than require a swift input, a fighter can execute a normal attack with a quick tap of a button, but by holding either Down+Back or Down+Forward for a few frames and pressing a button, you can unleash one of your four special attacks for your character—it’s that simple.

More casual fighting gamers might hear a lot of complex terminology coming from intense players—from things like “blockstun” to “wake-up advantages”, even down to specific frame advantage for attacks. Pulling off high-end combos in games like Street Fighter IV or Ultimate Marvel Vs. Capcom 3 require a hair-trigger and laser-focus, sometimes demanding single frame timing to properly counter enemy attacks or press an advantage.

Pocket Rumble laughs in the face of this, instead enabling a Buffering system that allows players to essentially “queue” an attack during times when normally you would be unable, in order to have the attack come out on the first available frame. When blocking an incoming attack, for instance, you’ll normally be caught in “blockstun”. which can vary depending on the attack used against you. Exacting specific vengeance in another game would necessitate knowing your enemy’s blockstun value for the attack, their next logical attack, and the proper attack to use against them, which might also demand a complex stick movement to use anyway. In Pocket Rumble, just hold your desired attack during your blockstun, and you’ll execute at the first possible moment.