New Gameplay of The Witcher 3: The Wild Hunt Revealed at E3!

Gameplay from the latest chapter of Geralt of Rivia’s saga slashed its way to the top of this year’s E3 exposition, winning IGN’s E3 People’s Choice Award for the second consecutive year. The Witcher 3: The Wild Hunt‘s gameplay demo at the show was a visual and technical treat that expands on several features of the franchise.

In the titles prior to The Witcher 3 the world was intimately detailed, yet constrained by intentional terrain design. The level layouts served as a compelling backdrop to Geralt’s dark-fantasy exploits but the numerous invisible walls and geographical obstacles ultimately made the Northern Kingdoms feel small and cramped.

Fortunately, The Witcher 3 features a fully open-world environment for players to explore. During the demo, Geralt pauses at the top of a hill and the camera is panned to show beautiful and rugged forest below. “In The Wild Hunt players can travel to any location you can see,” our presenter says while pointing at a far-off mountain peak, “you can go to the farthest reaches of the Northern Kingdoms—granted you may not survive—but you can.” 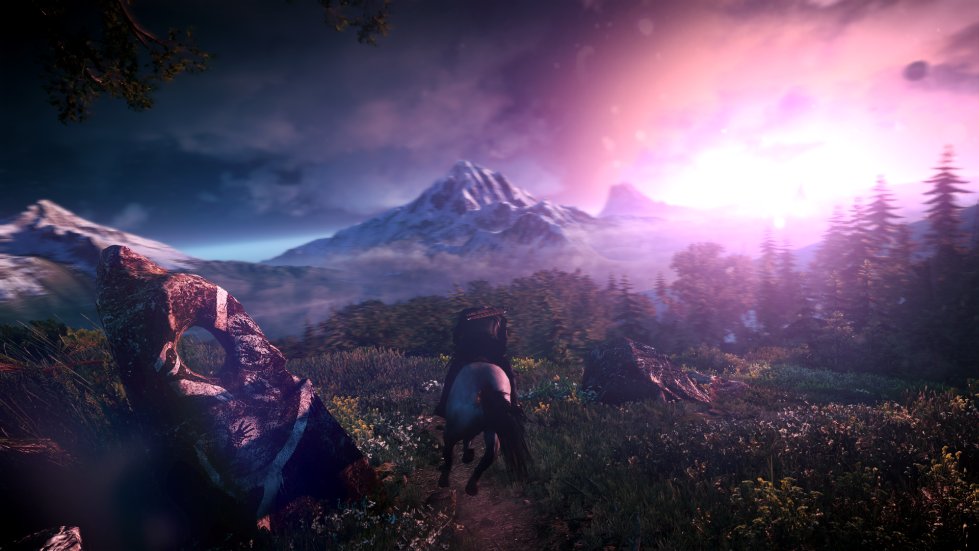 After the brief repose, we see Geralt set a fire to meditate and drink his potions that will help him on his current quest: to hunt a griffon. Equipment and meditating remains the same from The Witcher 2 but now Geralt has access to new tools like the crossbow and mutagens to temporarily enhance his fighting abilities.

The latter will be particularly useful because potions now affect the player differently from previous Witcher titles. Witchers are mutants with enhanced senses and metabolisms, which allow for them to consume toxic potions that help the player gain the upper hand in certain situations. However, the more potions that are consumed, the higher toxicity you accumulate. The previous games applied the toxicity concept as a limit on the number of potions that the player could be affected by at a time. In The Witcher 3, it is confirmed that elevated toxin levels in Geralt’s system will now negatively affect his performance with movement and perception penalties. I welcome the concept in order to ease the dependence on some of the more exploitable potions from the other games such as Thunderbolt, which made a difficult game extremely easy.

After exiting the menu, our demo showed a new feature called “witcher senses”, which was reminiscent of Eagle Vision from the Assassin’s Creed series. With his enhanced hearing and sight, Geralt is now able to easily detect signs such as blood and sounds that allow the player to track their prey and avoid an ambush. With it, our demonstrator was able to follow a blood trail to Geralt’s quarry. At this point, the crossbow sees use with “tracking bolts”, which cause heavy bleeding and allow the target to be followed more easily. We are treated to an exciting chase as the griffon, surprised and wounded by the sudden attack, flies off and eludes Geralt for the moment.

During the chase, Geralt stumbles upon a group of bandits harassing a homestead and decides to intervene. “In The Wild Hunt, we want to give the players the option to interact with or simply spectate what happens in the world.”, our presenter chimed in.

To showcase the combat of The Witcher 3, we see Geralt draw his steel sword and move in. The swordplay is gritty and deadly, with a focus on strategic maneuvering to mitigate being outnumbered 3-to-1. I noticed that Geralt’s movements during combat were more deliberate, eschewing flashy spins and acrobatic rolls in favor of a more practical style. This translates to more control, which was sometimes an issue in The Witcher 2. Previously, Geralt’s combos would become increasingly showy as the player exploited an opponent’s opening, which often translated to the player’s death as Geralt’s showmanship would expose himself to retaliation. 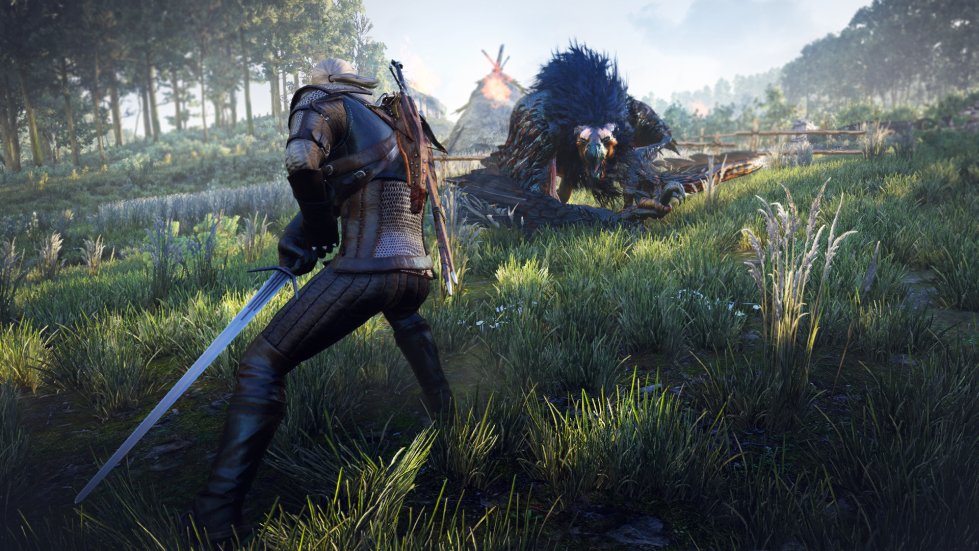 Signs, a witcher’s magic, remain much like The Witcher 2 but with some  minor touches that may be upgradable in the future. Aard, the force and shockwave sign, leaves visible impressions in the ground where used and still allows for Geralt to unleash a gruesome finishing move on a hapless opponent. Igni, the ubiquitous fire spell, can now be unleashed as a wave or continuous stream for tactical flexibility. Yrden, the trap sign, returns with a wider area of effect. Quen was NOT used in the demo, however I would imagine that it functions much like it did in previous iterations as a magic shield to temporarily protect Geralt. Finally, Axii is still the useful mind-altering sign that allows the player to confuse enemies in combat and persuade NPCs a la jedi mind tricks.

The first part of the demo ends with Geralt finding the griffon again and eventually bringing the beast down in a manner that is left to our imagination as they transition into showing us the city of Novigrad. The presenter pointed out that “the world was painstakingly realized to the tiniest detail, from the grass, stone, and clouds”. He was absolutely right. I wanted our demonstrator to stop riding down the road just so I could drink in the countryside and the massive city walls looming in the distance.

Our presenter also pointed out that the developers of CD projekt RED built the world as a “series of ecosystems”, in which man, animal, and monster coexisted with one another, on a more intimate level than even The Elder Scrolls. He continued to report that the game world’s inhabitants interact with each other with or without the need for Geralt’s input. For example, bandit attacks on villages reliant on traveling merchants will experience higher prices until a wandering mercenary (not necessarily Geralt) is persuaded or hired to intervene. I am inclined to agree with what he was saying after what I witnessed already. But without visual confirmation, that has yet to be seen. 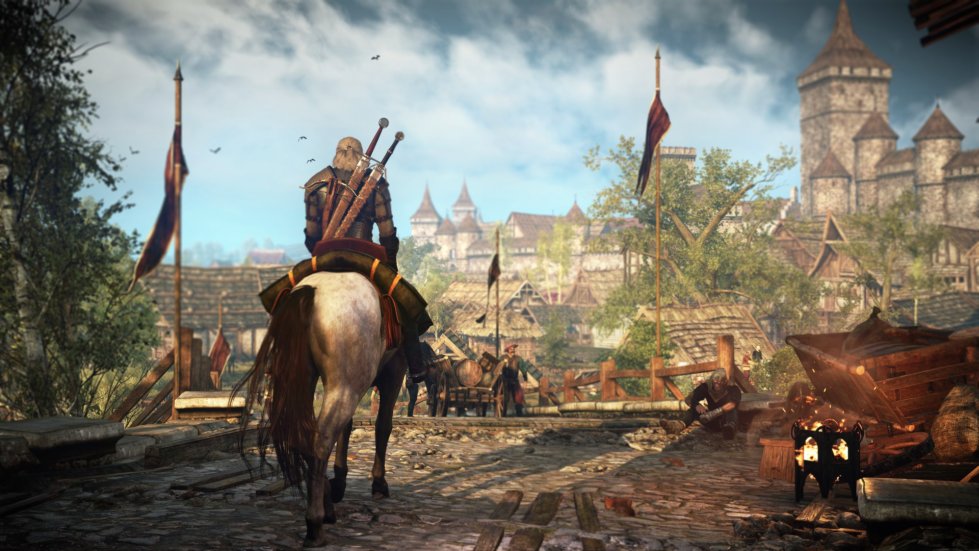 At the presentation’s end, I was thoroughly hooked on The Witcher 3. It takes the best aspects of The Witcher 2 while expanding into ambitious new territory. The massive open-world, improved combat, and lush character and environment models will be sure to captivate players new to the series and delight veterans-myself included. Anticipated to release in February 2015, The Witcher 3: The Wild Hunt will be available on Xbox One, Playstation 4, and PC.