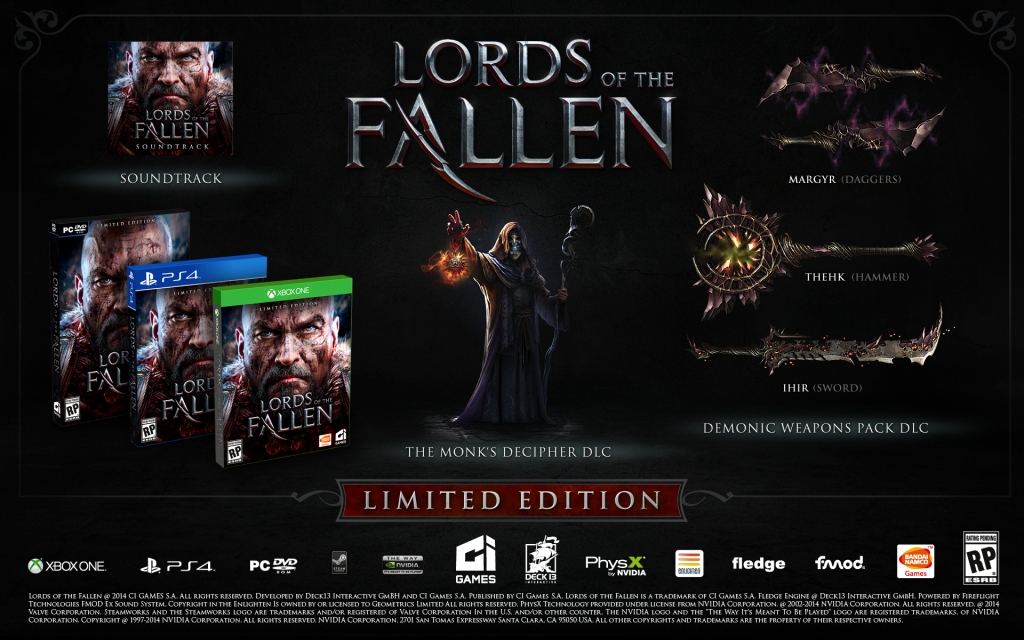 Lords Of The Fallen Swears It Isn’t Dark Souls, And I Believe It

There’s a growing demand for games that truly test your abilities. Games that require laser-focus and a calm and steady hand for success.

What was once a severly niche genre has begun to expand and grow, especially since the wide popularity of Dark Souls, a game lauded by many as the game of the generation.

In steps Namco Bandai to try its hand at a similar game while still trying to maintain a strong sense of identity with Lords of the Fallen. Many have dismissed it as a newer, next-gen Dark Souls game, but it’s a touch more complex than that…and that may not be a good thing. 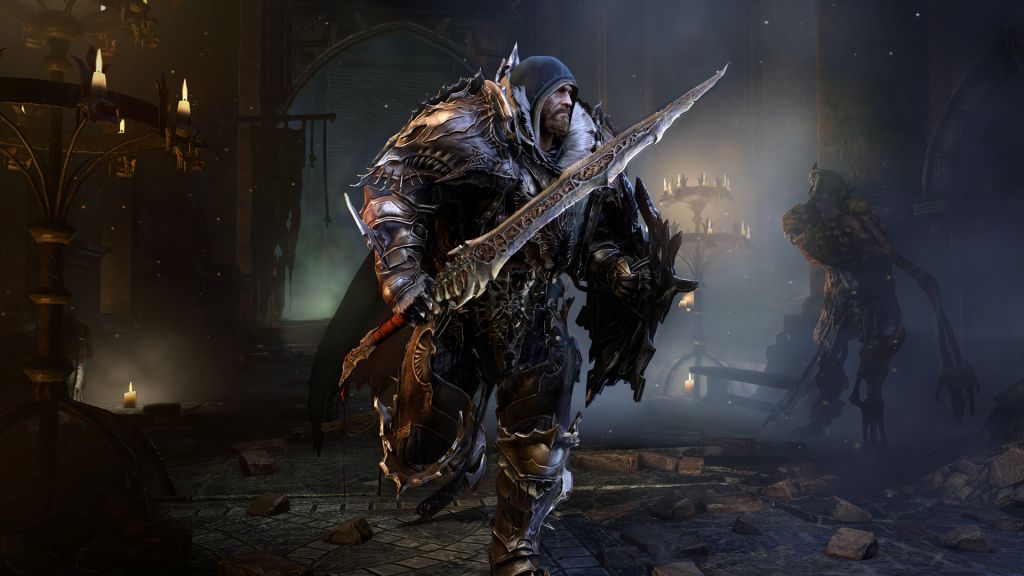 We’ve talked about the game in the past, when details were a touch more scarce. After a battle with divine beings in which mankind was victorious, crusades to wipe out the “evil” in man resulted in the branding and exiling of sinners during a time of relative peace.

Now, as the armies of the gods return and threaten that peace, our protagonist Harkyn is brought back to the forefront in an attempt to utilize his “inner evil” to combat the divine threat.

And he does this the old-fashioned way: with gratuitous amounts of violence. This translates well into the Dark Souls comparison, every foe you encounter is dangerous. Your health is limited, and you can’t just swing your sword around with abandon—a clear parallel to the health and stamina bars of the game’s contemporaries.

Once you get your hands on the game, however, you start to feel (more than see) the ways in which Lords of the Fallen differentiates itself from games like Dark Souls.

The combat in Lords of the Fallen, according to my friendly host as I played, was designed to be difficult and challenging, but less outright punishing than the game’s counterparts. This manifests in a few ways: dodge rolls feature considerably more invulnerability frames than you might expect, requiring much less precision to avoid taking damage. Attacks feel as though they consume a pretty sizable chunk of stamina per swing, but are much less committed than an attack in Dark Souls, say, as each can be more easily cancelled into a block to avoid damage.

While you may be a little more diverse in your own combat, this enhanced mobility and defensive responsiveness is tempered (in my mind, at least) by a few different aspects of enemy behavior. Several of the basic enemies I encountered were more aggressive and had longer attack patterns than I would have expected—underestimating them resulted in the loss of half of a health bar or more at times. 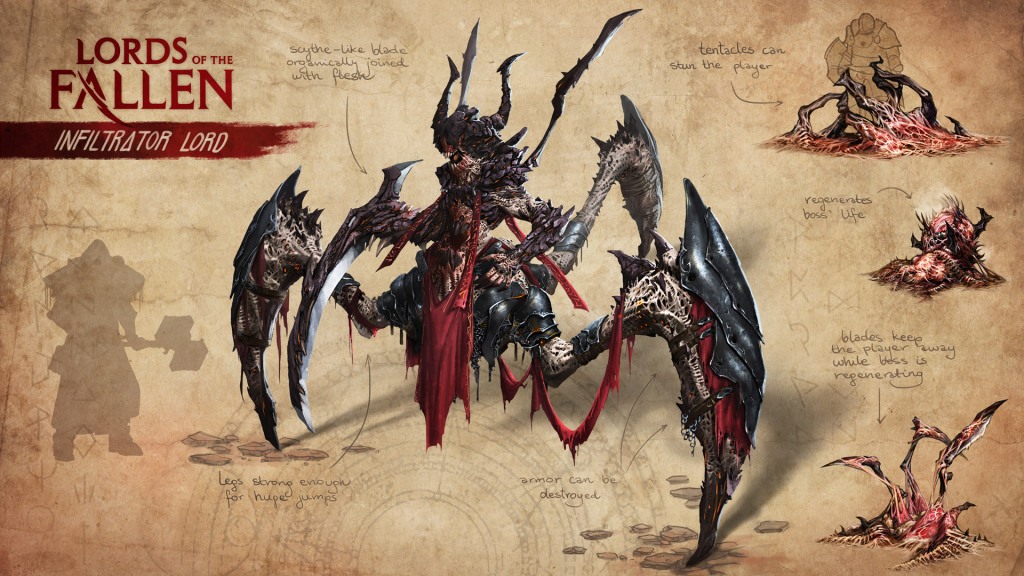 Some enemies are heavily armored and are more prone to counterattacking than making the first move in combat, requiring more consideration and clever movement to ensure you don’t end up run through. Admittedly, however, I ended up just backstabbing these guys to death over and over again—a possible indicator that some of these enemies’ behavior hasn’t quite been fully thought through.

Other enemies can confound simply by behaving erratically or attacking quickly. A strange poisonous lizard attacked me at one point, spraying me with toxic fumes and performing powerful leaping attacks with little indication as to when these attacks would come. These enemies are best dispatched quickly and aggressively to prevent them from sneaking hits in without warning. 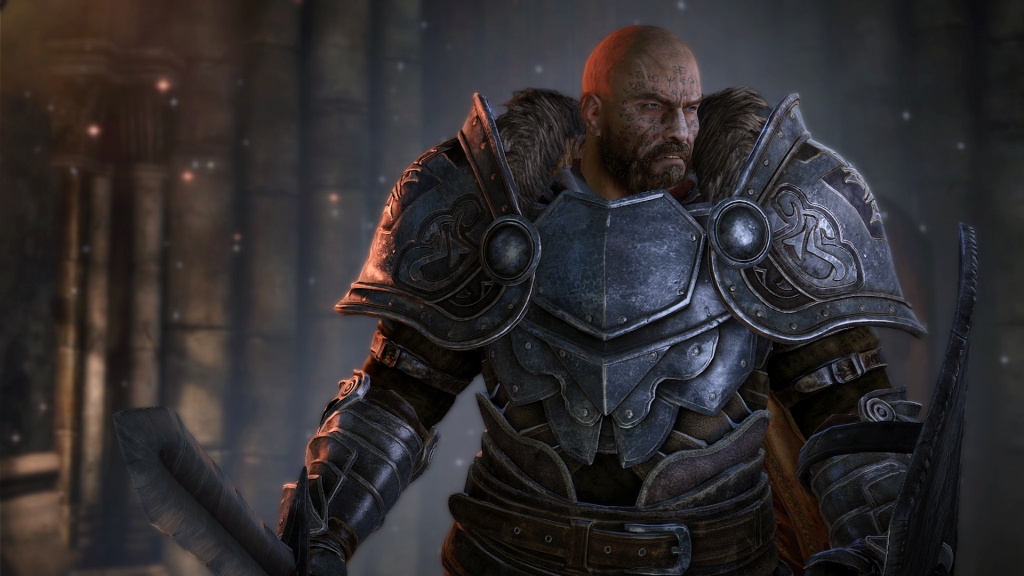 This is supplemented by a variety of weaponry and equipment that you can use at any given time. In the demo, we were given a small selection of weapons to test out how each behaves in different scenarios. You could wield a mid-ranged spear that attacked with quicker, lighter hits, for instance. A simple longsword took more energy to use and had shorter reach, but attacks were fairly quick and more powerful than the spear. A heavy hammer had a large wind-up but a big payoff. A pair of knives could strike fast and with little stamina consumption, even having the unique ability to use a knife in each hand (all the other weapons could switch between one-handed and two-handed stances, the knife was unique in this regard).

To support you in this, you’re also given a series of magical gauntlets, each having a different magical effect and cost that can be used as ranged support. These spells are somewhat risky in their use, but can bring heavy rewards in the form of lasting or extreme damage. The projectile gauntlet had to charge for a second or so before launching a quick fireball that ignited the target. The explosive gauntlet had an even longer charge time, but unleashes a powerful area-of-effect spell that deals very heavy damage. Using these consumes a third meter that recharges slowly.

The game is laid out in a more classic form—think of it as Dark Souls in God of War‘s body. Rather than explore an open world and sort of absorbing the narrative as you go, Lords of the Fallen is set up in a series of levels and dungeons, you won’t be traipsing around an open hub however you like. The devs have said you’ll be encouraged to revisit past stages, however, as you’ll be able to locate more hidden caches of equipment and the like as your abilities grow. Your actions throughout the story will also alter the environments at large, so it could be that areas that were previous closed might open after particular story points. 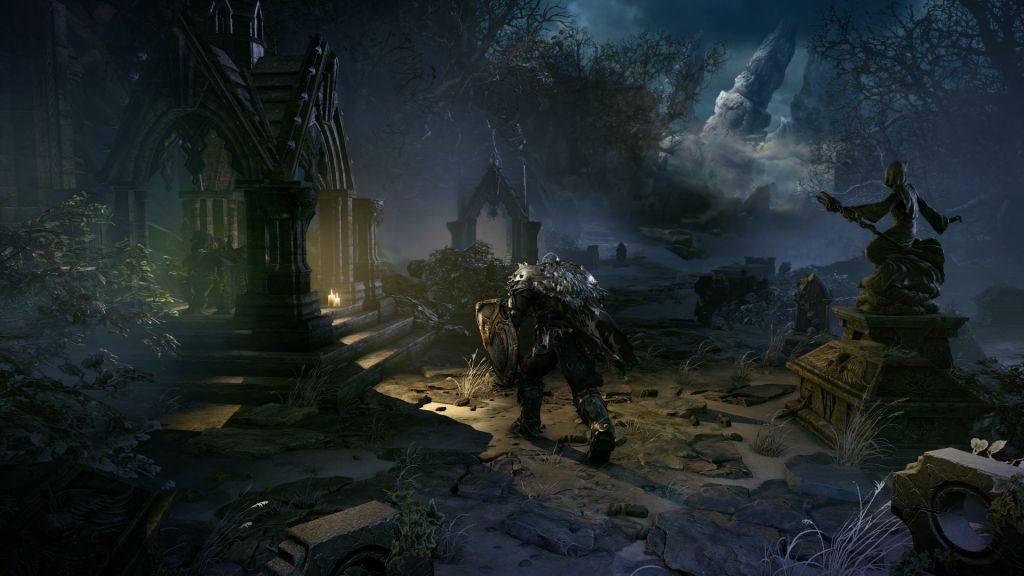 If the game nails anything, it’s the look, though. The level we got to see wasn’t particularly inspired in terms of design, but the area felt at once dank and ancient while still having sunlit courtyards. There were some curious Gothic juxtapositions that were certainly awe-inspiring, even if they weren’t completely unique.

That being said, the HUD could definitely use some reworking. Your health and stamina bars, in particular, are not prominent enough and are positioned awkwardly, making keeping track of your stamina in high-stress situations extremely difficult. The menus aren’t particularly responsive, using an eight-directional system that didn’t seem to be able to detect or highlight certain menu entries. The information in equipment tooltips wasn’t exhaustive by any stretch of the imagination, providing only barebone info and little else in terms of item usability.

It appears that, while many aspects of the game are seeking to differentiate Lords of the Fallen from other games it will inevitably be compared to, the game is going to be a more “accessible” and intrinsically less in-depth version of those games.

The taste of the game I got was small, but on the whole satisfactory. While I’m not certain it will be able to match the fervor of other games that have come before it, it is at least an attractive and passable excursion into the next-gen world of high-strat action-RPGs.

Lords of the Fallen is hitting Xbox One and PlayStation 4 on October 28th this year.