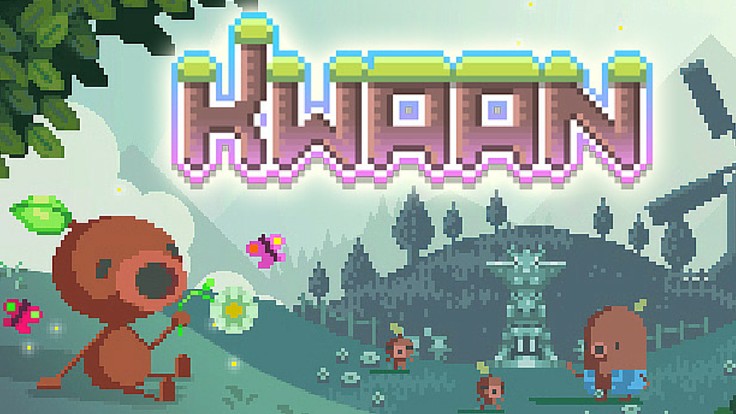 Most games we come across have a clear-cut purpose or goal. You may find yourself on a quest to rescue a princess, or play as a soldier caught behind enemy lines. Regardless of the goal, a lot of gameplay elements are pretty straightforward: overpower your enemy, scale a mountain top, and/or collect a sacred idol. After you’ve played a game for a few hours, you generally have a clear vision as to what you’re striving for, and the direction in which you are moving. But what if you came across a game that suggested what you do, rather than tell you directly? This is the premise of Kwaan, an interesting new Indie release from French developer Ankama Games.

The objective of Kwaan is very different than most games, and at no point does it shy away from its intended purpose. Developers wanted to create a title in which players worked hard to create and sustain life, rather than experience it. The journey through Kwaan forces you to work tirelessly in order to keep a mystical tree happy and healthy. At no point during your “adventure” are you doing things for yourself, and the constant responsibility you have towards the world tree keeps you focused on uncovering secrets and items that may aid in keeping the wooden titan alive. But that doesn’t mean Kwaan doesn’t possess an underlying layer of self-preservation, and there is a rather important conflict that will arise should you fail to keep the world tree satisfied. This isn’t a relaxed garden simulator in which the wilting of a plant simply leads to you buying new seeds. The dissatisfaction of the world tree has real and dire consequences, and failing your mission means the literal destruction of the world. A sad world tree will cry so mightily that it drowns and destroys the world around it.

It may seem like a drastic, almost unfair event,  but there is a silver lining in Kwaan. Although you may lose the world you’re currently working on (the server will actually crash and create a new world), you’ll still keep your character’s overall progression. Each time you attempt to keep the world tree satiated, and each time you may fail, you’ll still grow as a person. This will allow you to take your newly-discovered skills into the new world in order to keep the next world tree much happier than the last.

There are a variety of things that must be done to keep a particular world tree from becoming depressed. Natural resources must be harvested, and there are many useful items laying just under the soil that can aid you in your quest. You can even add your own personal flair to the world by crafting pixel art plants and decorations. You can also gather friendly animals, which will surround the world tree to elevate its mood. Pollution must be cleared as quickly as possible, and the world as a whole should be organized and healthy.

The unique thing about Kwaan is that you won’t have to go about your journey for world perfection alone. Kwaan is an MMO at its heart, and allows for many different players to join one another on a single server. Working together is a pivotal part of the game and the biggest deciding factor between success and failure. As the world tree grows and flourishes, it will begin to need more resources and items to be fully satisfied. Without many different individuals working to gather things in unison, the task can become overwhelming rather quickly. Like any good cooperative game, the better a team manages to do the more rewarding the experience. Each night at midnight, the world tree will decide if it is satisfied enough to continue onward. If not, the world is drowned in tears and players must start their journey anew. But if the world tree is happy, a new day will begin and new features and world lore will unlock. Because of this, the farther a given group may progress within Kwaan, the more storyline elements and items they will unlock. This type of progression helps to push players in the right direction, but it will be up to the community to communicate with one another and organize each day’s tasks to achieve supreme victory.

Kwaan features adorable pixelated 2D graphics, and a soothing — yet catchy — soundtrack. Developers did a fantastic job of creating a unique experience that oozes creative gameplay, but it is important to note that Kwaan is not for everyone. At its roots, Kwaan is a world-building title, but one that replaces usual elements like crafting and questing with a gameplay style that focuses heavily on collection, organization, and a strong community bond. If done correctly, the Kwaan experience can be very emotionally rewarding. If you’re interested in getting more information regarding this release, be sure to check out the dedicated website here. Kwaan is available right now on Steam.