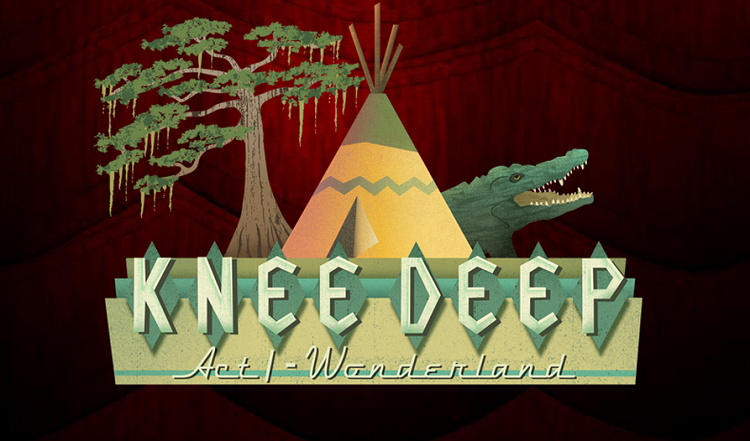 Narrative games have become quite popular in recent years. Gamers actually enjoying an exciting and immersive story isn’t exactly news to developers. Most narratives take this concept to the next level, enveloping subtle gameplay elements with enchanting story arcs and powerful character interactions. These types of releases still manage to complete the checklist for what constitutes a “game,” but usually end up playing out like a theatrical production or an immersive movie. Telltale Games has perfected this particular formula, bringing us great narrative game versions of The Walking Dead, Game of Thrones, Borderlands, and even Minecraft. Indie developer Prologue Games is hoping to follow in their footsteps with a powerful new narrative titled Knee Deep. This theatrical film noir packs a powerful parable punch, while still involving you directly in how the story unfolds.

Cypress Knee is a backwater Florida town, shrouded in mystery and intrigue. You’ll take control of three different characters, each with a unique past and a questionable present. Blogger Romana Teague, local reporter Jack Beliet, and private investigator K.C. Gaddis find themselves thrown amidst controversy and ulterior motives when a broken-down actor hangs himself on location. The events that follow unravel an engaging tale about a curious town and its eccentric inhabitants. The people of Cypress Knee are rather unique, and all of the character interactions crafted by the developers are very entertaining. As the player, you’ll get an opportunity to directly influence how each main character reacts and interacts with the townspeople. The dialogue decisions you make will decide whether or not a deeper conversation is unlocked, or if certain NPCs become agitated or evasive. You’ll need to approach things with a very analytical mind if you want to uncover the whole truth surrounding this mystery. There are subtle breaks in the action, and simple mechanics that help to make Knee Deep more of a gaming experience. Puzzles will present themselves at key times, forcing you to take a moment to piece together certain items like QR codes, fingerprints, and past conversational items.

Knee Deep’s visuals are perhaps the most entertaining and unique thing about the release. The title features a lot of eye candy, boasting some very nice graphics that are on par with modern 3D releases. What makes it such a stellar affair is the setup in which each scene is presented. The entire thing moves and breathes like a theater act. Set pieces are seen shifting behind subtle shadows. Clever prop designs help to craft settings and create ambiance for the “actors” to spin their craft. It’s smart, and it works well with the main theme that an actor spurred the mystery itself. Best of all, it offers us a unique way in which to experience a narrative release. This helps to set Knee Deep apart from all of the other story-driven releases we have seen in past years. This is a game that drags you in with its visual beauty, and then keeps you on the edge of your seat with an enthralling storyline.

Knee Deep was released episodically in three parts. All three episodes, featuring the full storyline, are available right now via Steam. The $20 price tag is rather fair considering you’re getting the full package. You can also purchase the release directly from the dedicated website. If you’re interested in getting more information regarding Knee Deep, be sure to check out Prologue Games’ official website. You can also follow them on Twitter, Facebook, and Tumblr.