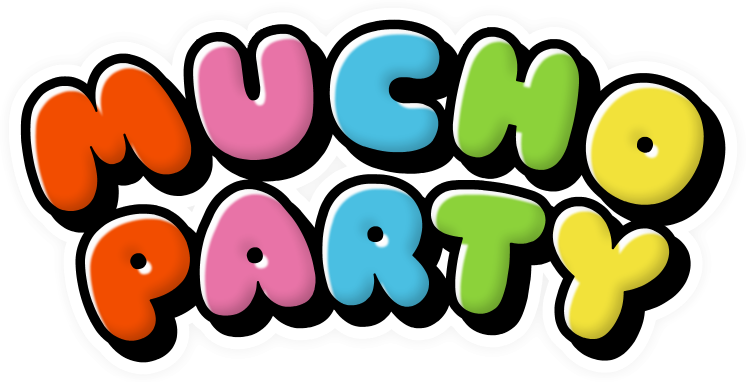 Kick Your Next Shindig up a Notch With ‘Mucho Party’

What’s more entertaining in a party atmosphere than gathering everyone up to play a couple of games? Whether you’re crowded around your console of choice, connecting together for a large-scale LAN, or huddled in circle formation to enact a tabletop adventure, games can really bring the party together from both a social and entertainment standpoint. French developer Globz is attempting to capitalize on this atmosphere by releasing Mucho Party, a mobile game designed specifically to turn your party into a mini-game fest.

If Mucho Party seems familiar on the exterior, it’s because it falls under the same genre as Nintendo’s mega-hit Mario Party — although it is important to note that Mucho Party is a very scaled-down version by comparison. You won’t find elaborate maps or lengthy battles, but you will discover an artistically-driven app loaded with fifty local multiplayer mini-games just waiting to be conquered. Upon first download, the game comes preloaded with five mini-events, but you can unlock forty-five more through in-app purchases. It may seem like another quick cash grab, but we assure you Mucho Party is nothing like that. For one, the additional games package only costs approximately $3.99, and that’s a small price to pay considering how much entertainment value you’re getting. We don’t think you’ll mind forking over your hard-earned cash to help support this developer, considering the time and effort that went into the creation of Mucho Party. It really shows, and each of the games are a blast to play, offering up unique visuals and gameplay elements. 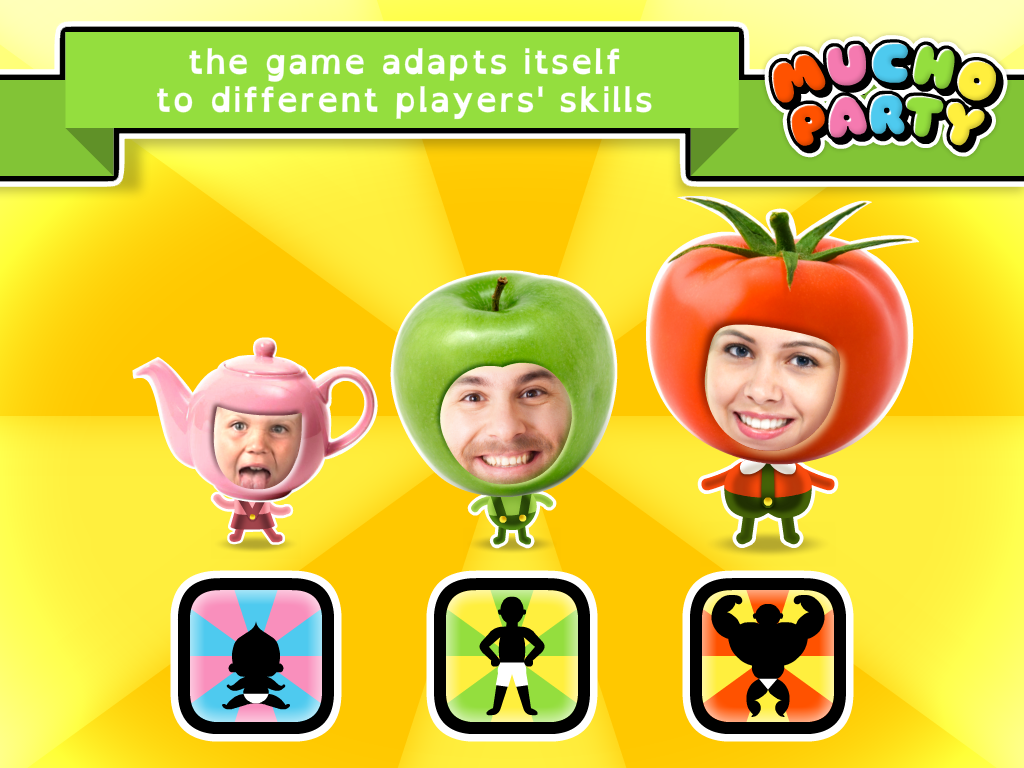 You can be sure that your characters will be unique and very much specific to each player, considering it makes use selfies. By snapping photos of your faces, Mucho Party pulls you and your friends right into the game. From there, the hilarity continues as the game rotates and pins you against one another via six different game modes: duel, league, tic-tac-toe, hotseat, mosaic, and roulette. Pretty much all of the mini-games can be played using one hand, as most of them involve slashing, swiping, tapping, or sliding of the finger. The games are kept simple enough to appeal to a wide variety of skill levels, and there is even a handy difficulty slider that allows kids to play against adults, and hardcore gamers to play against casual ones. It’s a very nice addition that really helps to bring the party together, without shunning anyone who may not be very familiar with visual entertainment. 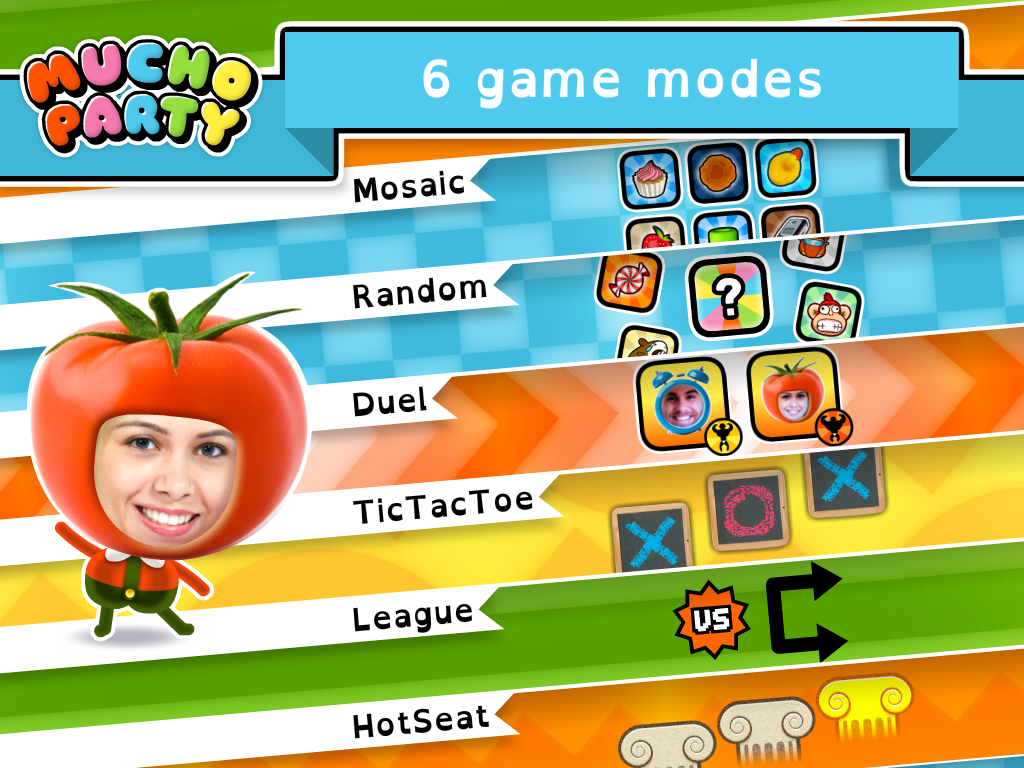 The games vary in their type and difficulty. Some will feature a seamless screen, while others will be sliced into a split-screen. Players are meant to sit across from each other, and we should note that it is much easier to play and view these games on a tablet than on a phone. The games included with the application help to showcase some of the play-styles you’ll find, should you want to purchase the entire release. In one mini-game, you’ll feverishly attempt to slide three pucks onto your opponent’s side of the board. The catch is that the pucks must pass through a small centralized opening. The first player to force all their pucks onto their opponent’s side wins, but be careful, as your opponent can use their pucks to knock yours back. Another game has you tapping on the screen to fire lasers at large asteroids. Hitting an asteroid will push it closer to your opponent’s planet, with the first one to be hit by an asteroid declared the loser. A simpler game has you tapping the screen as fast as possible to run, and then swiping upward to force your character to leap over hurdles. The first player to the end of the “course” wins the match. 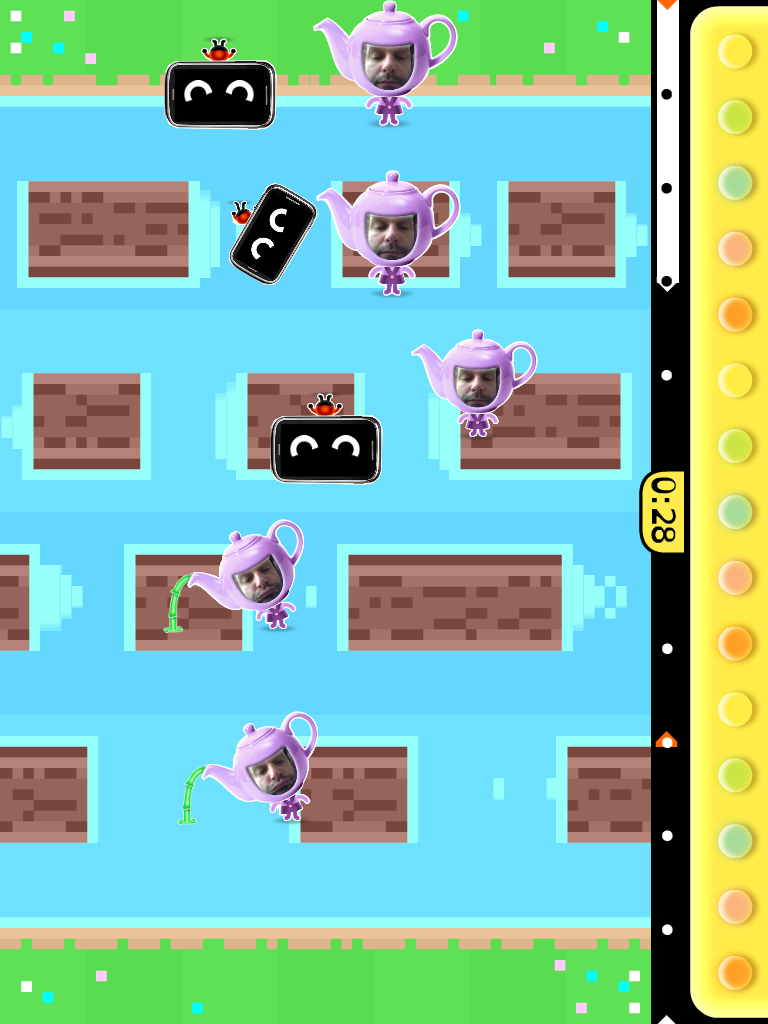 Mucho Party is a solid release, and a great addition to any party. In fact, it’s so good that it’s already received the Ping Award for Best French Mobile Game of 2014. Globz is ensuring the globalization of its release as well, and you can find Mucho Party in eleven different languages. Those of you into audibles will find a lot to listen to, as Mucho Party features over 40 different tracks from indie composer Whitaker Trebella. If you’re interested in getting more information regarding this stellar release, be sure to check out the developer’s website here. You can find Mucho Party right now in the Apple App Store, the Google Play Store, and even on Amazon.