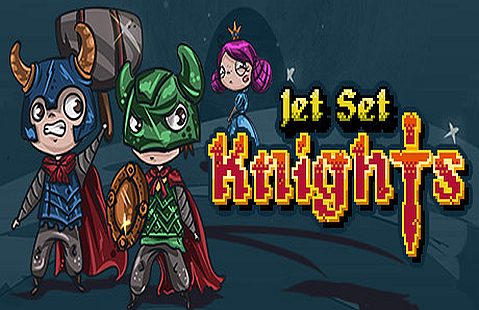 There are a lot of Indie games released each year that feature a heavy retro style. This usually entails some kind of graphic under-haul or a throwback to old-school gameplay elements. However, it’s not often that we see an addition to the Indie genre that is truly retro. Most releases attempt to bend the genre by adding new and intricate twists, or end up paying homage to the past while still maintaining fairly modern graphics. A new release by developer FobTi, dubbed Jet Set Knights, appears retro to the very core. Inspired by relics of the past like Bubble Bobble, the original Mario Bros., and Snow Brothers, this release offers solid gameplay and old-school graphics that will make any retro enthusiast smile.

The vision for Jet Set Knights is buried deep in the past, at the beginning of the NES era. This isn’t a traditional side-scroller, but instead mimics the single-screen wonder of most early NES titles and ATARI smash hits. There is a small amount of verticality in the release, and the screen moves up and down slightly to accommodate larger levels. The graphics are definitely better than anything that came out of the late 1980s, but they still manage to carry a great old-school aesthetic. Everything has a well-crafted, pixelated feeling to it. The enemies, platforms, background, characters, and even the attacks are all retro-styled. Those of you looking for artistic flair should still find yourself enthralled by the colorful splash on screen and it is important to note that although the graphics are meant to mimic the past, they are still very smooth and polished.

At its roots, the gameplay is very simplistic. You’ll find yourself jumping back and forth between platforms, eliminating enemies as you go. There are a variety of enemy types to see and destroy, including but not limited to: skeletons, slimes, ghosts, devils, and even giant snowballs. Each enemy comes equipped with a variance of skills so you’ll need to be on your toes and remember what you’re dealing with. It can get rather hectic when a ton of enemies are on screen, and the added layer of difficulty is a welcome surprise. When you aren’t inundated with enemies you’ll have to keep your eyes peeled for environmental hazards and traps. Each level features a ton of danger, eager to take you down, and at the end of each zone you’ll be greeted by an angry boss. Jet Set Knights takes all of the entertaining combat values of the traditional platformer and jams them into one exciting experience.

In its current state, there are four different knights to choose from. Each character has their own unique attack, and in some situations picking the right knight can make all the difference. Arthurus, Lanslet, Jarvis, and Hisgarus boast their own exclusive armor and exude different personalities. There are over 14 spells, artifacts, and weapons you can unlock to give the combat a little more depth. Jet Set Knights also features an entertaining retro-inspired soundtrack, similar to Shovel Knight.

Jet Set Knights is currently available as an early access release, so it’s important to note that the game isn’t loaded with content yet. As it stands, there are six levels, but developers are planning to introduce a slew of additions in the near future. New characters, levels, enemy types, weapons, spells, and core elements are the main things of focus, but FobTi is also promising some unique elements. There are plans to introduce a 2-4 player local cooperative mode, as well as a battle mode. Mini games, secret areas, secret characters, and more challenging quests are also slated to make an appearance. When it’s all said and done, FobTi hopes to have a finished product that offers the beauty and splendor of old-school platformers, filled to the brim with content.

You can grab Jet Set Knights in early access right now from Steam, but keep in mind that you’re not receiving FobTi’s finished vision. The early access model will hopefully give developers the funding they need to fast track the title to completion. The game already features gamepad compatibility, so those of you craving a true retro-arcade experience can plug in a controller and feel right at home. Jet Set Knights is a great addition to the platforming world and a wonderful homage to platformers of the past. Hopefully, developers will continue to add to this release and can manage to cram all of their ideas and values into the game in the near future. You can get more information about Jet Set Knights by heading over to the dedicate website here.