It’s RTS With Weather In ‘Etherium’

The fight is on to colonize and monopolize a set of planets housing a valuable resource in Etherium, an RTS game coming from Tindalos Interactive. 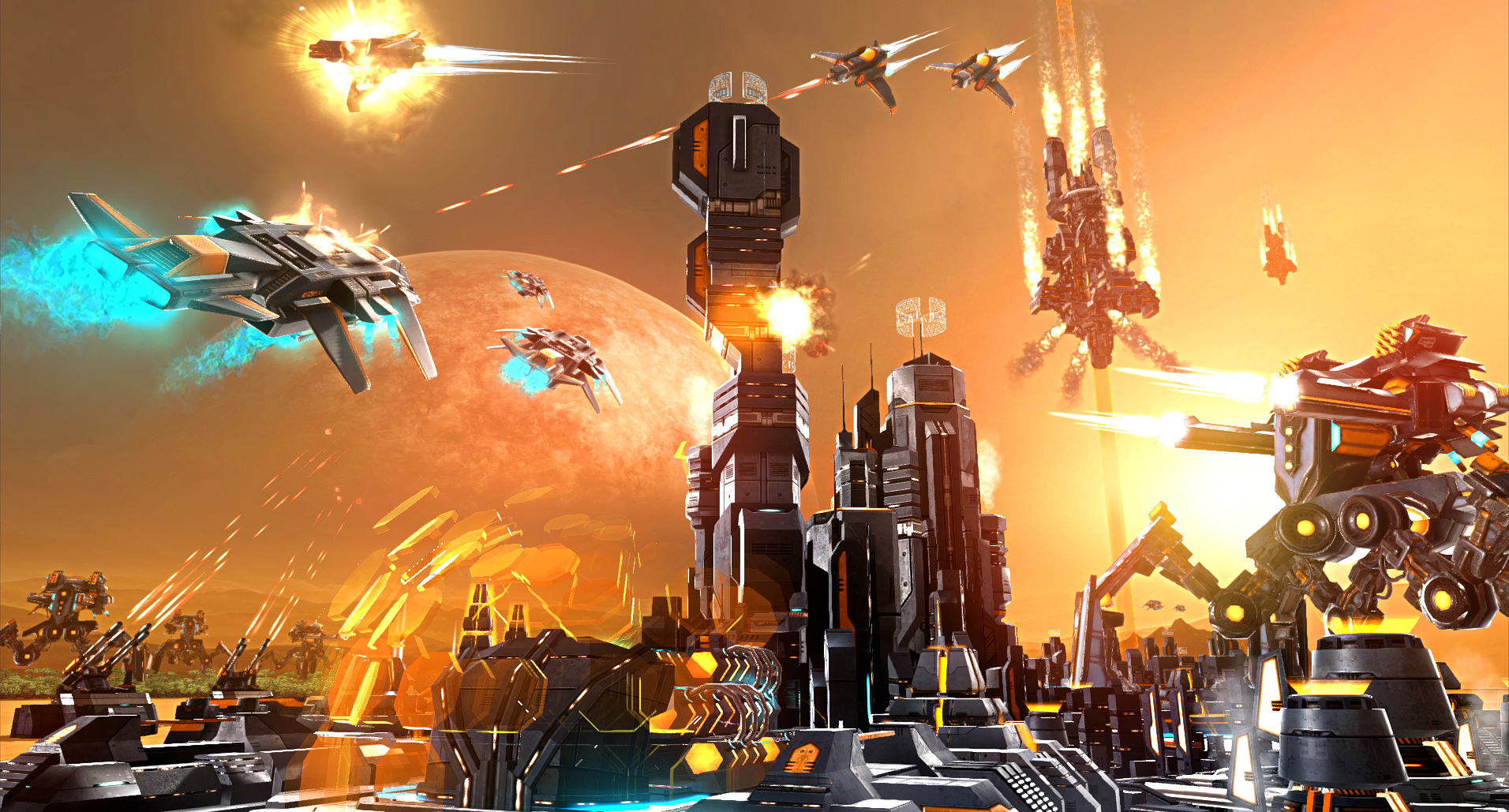 There’s been plenty to look forward to this year in the RTS scene, and with the new year rising, this France-based studio plans to start it right with the release of their Unity-powered strategy game.

You’ll take control of one of three factions, each having their own motivations and styles of gameplay. The humans are the sneakier of the bunch, having grown into a large corporate military, they use subterfuge and espionage to ensure they’re always aware of their enemies’ movements as they seek to utilize the Etherium to further bolster their profits.

The Intari are an alien race that desire to use the Etherium to further their own evolution. Etherium holds the special benefit of allowing the Intari to see into the future, allowing them to predict world events and adapt accordingly.

The Vectides are an unusual race of creatures that seem to be a marriage of sentient Etherium encased in robotic bodies. 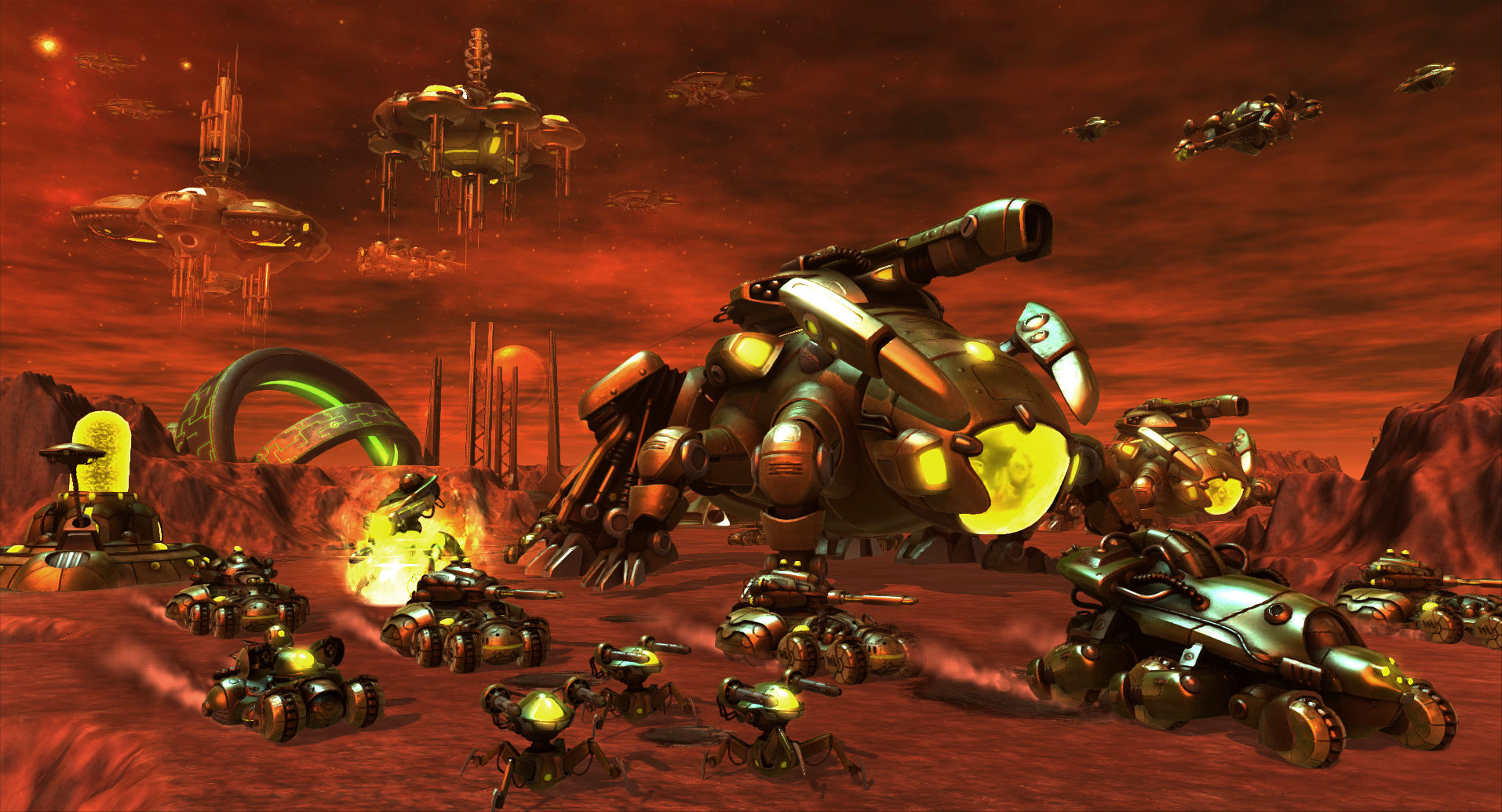 The gameplay is simple and recognizable enough: you start with a main colony ship as your main base and spread your influence across the planet’s surface in order to extract Etherium from spheres around the globe and expand your capabilities. You’ll send Command Squads from your main base to establish outposts to expand your influence, and can begin to build extensions to those bases to mount your offenses (or fight off your foes).

One of the interesting features of the game is the fluidity of technology. In many RTS games, once you’ve completed some kind of research, the upgrade is unlocked for the duration of the match. Games like Supreme Commander might obviate this by having various levels of factories required to build advanced units. In Etherium, base extensions can raise your tech level and allow you to call down more powerful units or unlock abilities on current ones, but should these bases be destroyed, your tech level will drop, and you’ll have to fight harder to reach that point again.

This isn’t necessarily a game of numbers, but is a strategy game meant to reward clever thought and proper utilization of your units. While infantry units might be squishy, they can take cover in forests or ruins in order to attack with greater safety. Many units function on a circular advantage system, designed specifically to combat another kind of unit. Colossi might be able to wreak havoc on other ground-based units, but they have little defense against an aerial assault. Without getting my hands on the game, it’s difficult to predict whether the game will buck the trend of generalization of your units and favor specialization, and whether it will truly shine with the dev’s claims that simply trying to overwhelm your enemy with masses of troops will not yield victory easily. 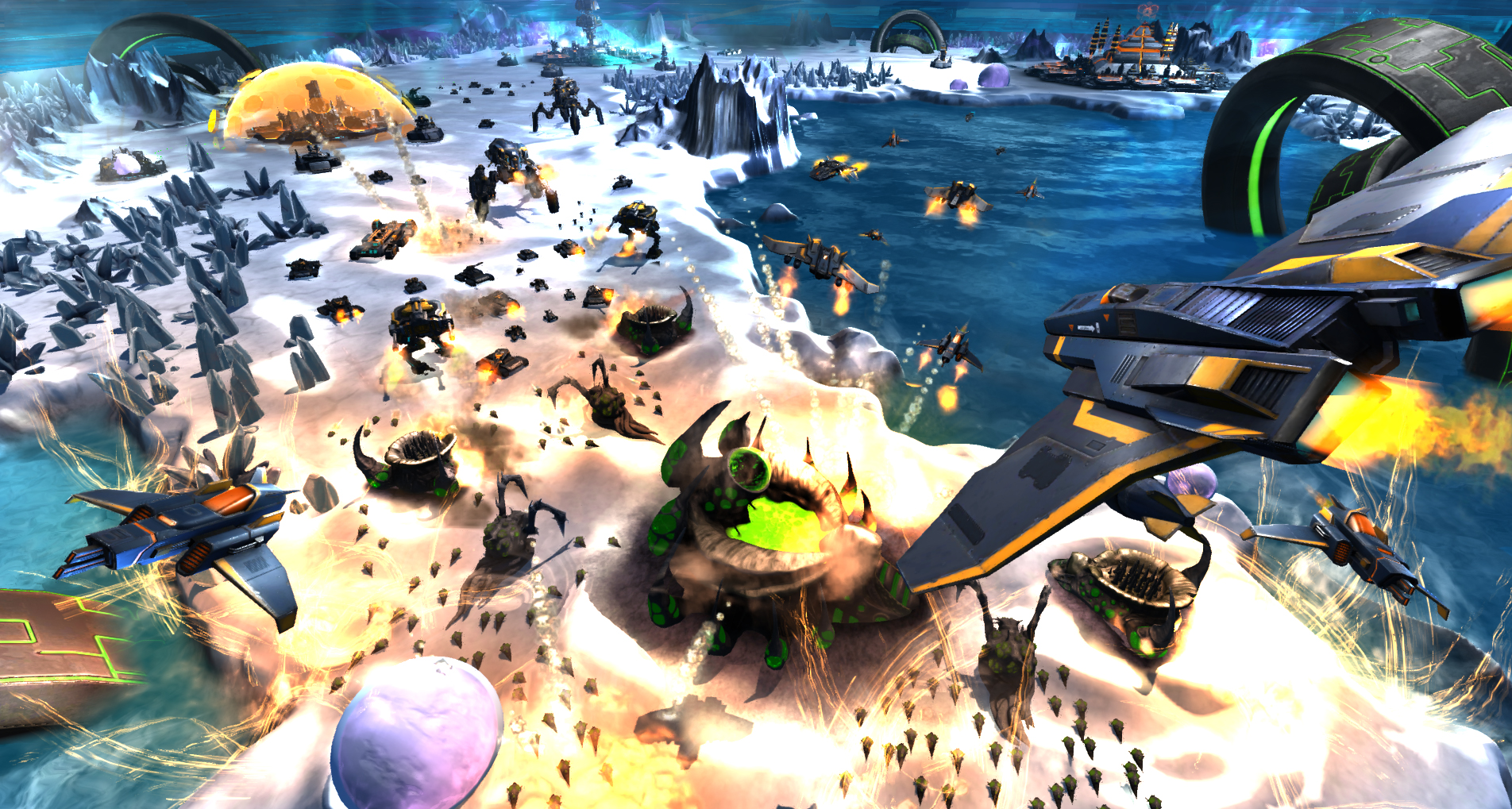 All the action in Etherium isn’t planetside, per se. You’ve got a sizable fleet in orbit above the planet, which serves as your main source of reinforcement throughout your campaign. While you’ll directly control troops on the ground, your orbital command will serve to enhance your troops’ effectiveness through a variety of means, triggering Forced Marches to increase a squad’s speed, rescuing powerful or valuable units with Retreat or using Orbital Bombardment to safely flush out entrenched units from range.

Additionally, each faction has a unique command skill to further cement their unique styles of play. Humans have a spy satellite to help keep tabs on enemy movements, the Intari can teleport units, and the Vectides can launch a Distortion Field (the function of which I cannot yet ascertain).

Each of the planets in the game also houses one of Etherium‘s more unique features: weather events that alter major game conditions. A sandstorm on the desert planet will lock units in place, protracting existing engagements, or shutting down hostilities temporarily. Arctic storms on another will freeze bodies of water, opening once inaccessible paths and exposing weak defensive facings. Hurricanes on another prevent the calling of more reinforcements, necessitating great care in choosing how you engage your foes. These events are particularly useful for the Intari, the powers of which can predict or even trigger these events.

Other planets house special units that don’t belong to the three playable factions, which can harass either side. Should you elect to do so, you can usurp these inhabitants for their territory, or subdue them and claim their units for yourself for a boost. 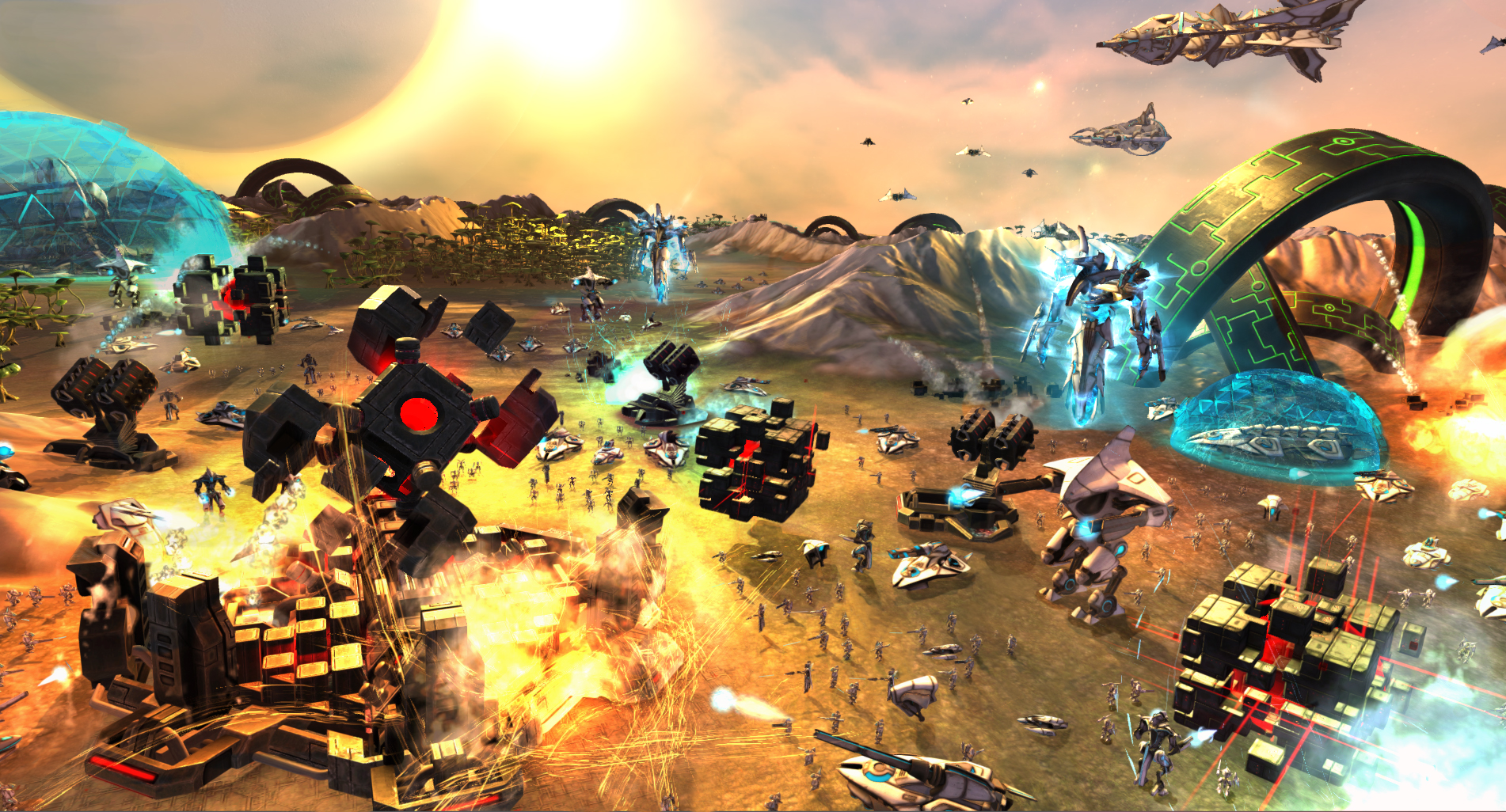 Victory isn’t simply a matter of rout in Etherium, either. There is the traditional method of aggression: the destruction of the opposing faction’s main colony ship, but you can also utilize orbital cannons on the planet’s surface to attack the enemy fleet directly, crippling their reserves. Destroying the enemy fleet will also yield a win.

The game features a single-player “Conquest” mode that uses a turn-based galactic map to plan your moves against your enemies on a grander scale, invading territory, conducting espionage, and boosting your abilities through research. Multiplayer modes will allow up to four players to battle it out on a single map.

Etherium is built with the Unity engine, which does allow for simple design and UI, and it does tend to show here. The game’s textures look fine at a glance, but tend to crumble under close scrutiny, and the game’s effects and animations don’t have a lot of impact behind them, which can drop a player’s satisfaction levels when successfully destroying a major threat, for example.

While many of these features are interesting to see implemented, my biggest worry is that the game is doing too much in a genre that’s fairly set in its ways. The most successful and widely-known RTS games have all stuck to a fairly basic formula, often only introducing one or two major alterations to make the game feel more unique. The Jack-of-all-trades approach can allow for a drastically different (but perhaps valuable) experience, but one that can often feel unfinished or poorly executed. If the weather system and command skills provide a serious boost, I can only hope it doesn’t come at the cost of unit variety and depth, because while the former can certainly add a lot of flavor, the latter are simply too crucial to cut corners around.

The same three-faction system with heavily specialized qualities to each is one that seemed to work very favorably for the upcoming Grey Goo, which we not only enjoyed at E3 this year, but is releasing in a similar time frame, with both Etherium and Grey Goo releasing in January.

Tindalos is giving this game their all, though, and there’s a lot to be said for a game with a lot of heart. It has some steep competition, and my initial impressions put it a step behind its contemporaries, but that doesn’t mean the potential to succeed doesn’t exist here.

The game releases sometime in January, with no price announced yet. Keep an eye out here for more news.