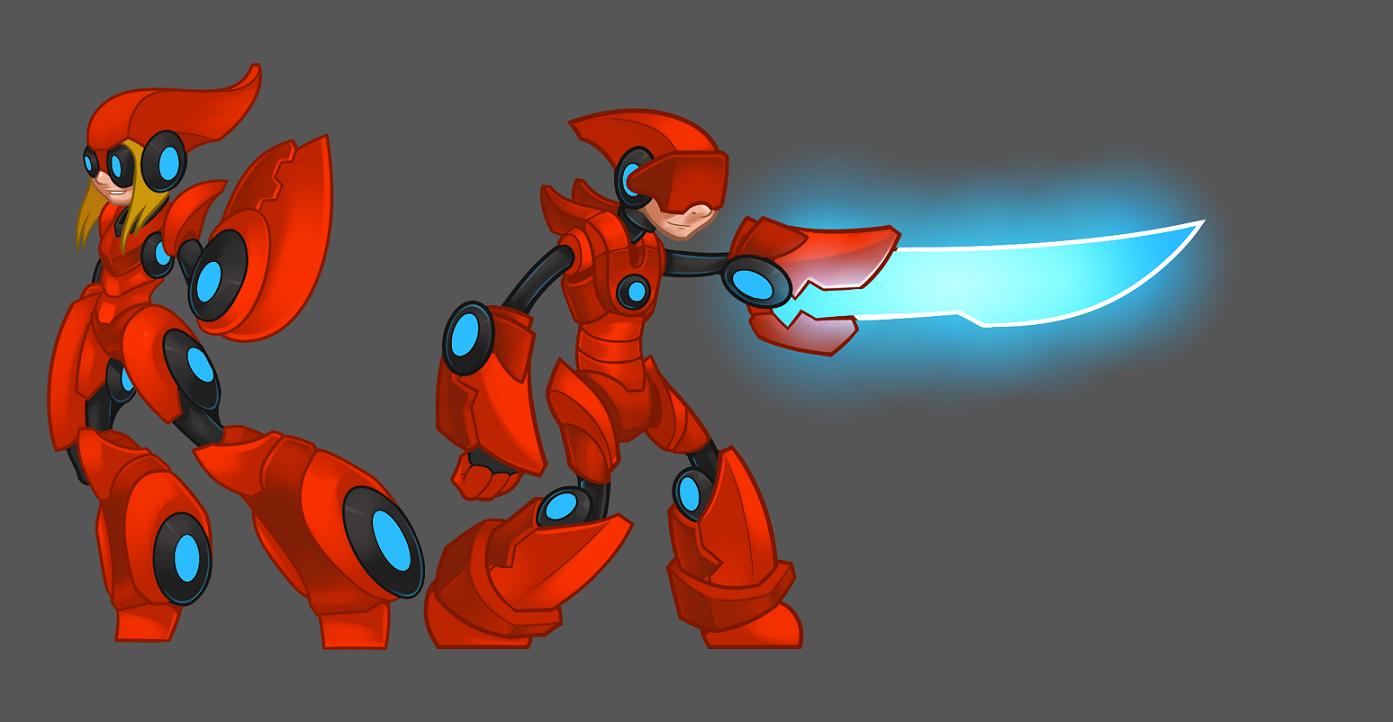 I’ve spoken before of the growing disparity between the AAA studio title and the humble indie darling—most particularly about how one seems hellbent on implementing (occasionally ridiculous and unnecessary) cutting-edge technology in an attempt to deliver photorealistic or otherwise completely bombastic experiences while the other has quietly returned to roots, finding new and occasionally completely mindblowing ways to use the game mechanics of the so-called “golden age of gaming” to breathe new life into the genre at much lower cost.

Echoes of Eridu is immediately familiar to anyone from the nineties. It’s being billed by its creators, Batterystaple, as a co-optional Mega Man-esque with roguelike elements. That can be a bit of a mouthful; I got to check out an early alpha build of the game, so allow me to offer another, more succinct description: it’s like Mega Man and Risk of Rain had a baby. 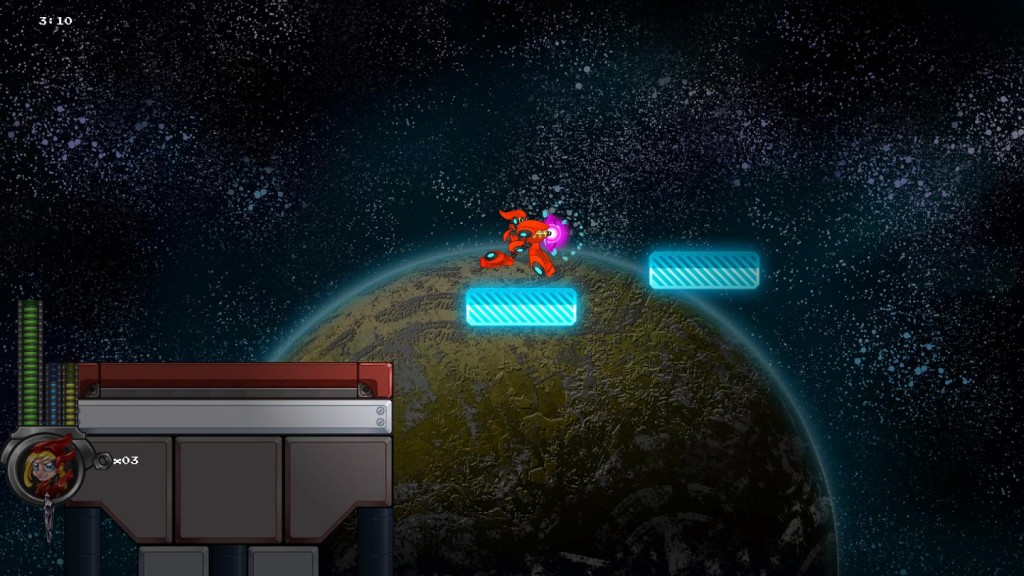 The Mega Man love in Echoes is on maximum-strength display here. The game in its current form features two heroes: Nina and Ace. Nina was once a cow scientist, but since the war traded one her arms out for a Buster some time ago. For all intents and purposes, she functions like Mega Man from the X4 days, obliterating enemies from a distance. Ace is your typical silent, mysterious assassin. Carrying a blade and a borderline-creepy love for the job of eradicating rogue robots, Ace is basically Zero.

In generally expected fashion, you proceed through a level in a generally right-hand direction, slicing or shooting foes and navigating across perilous platforms and a multitude of other obstacles. You can stick to and climb walls, dodge spikes and lasers, dash about, and even find out-of-the-way areas with rare items. Eventually you reach a boss and murder them, and move on to the next level. Where this starts to differ and drift into the Risk of Rain style of things can be first noticed here. 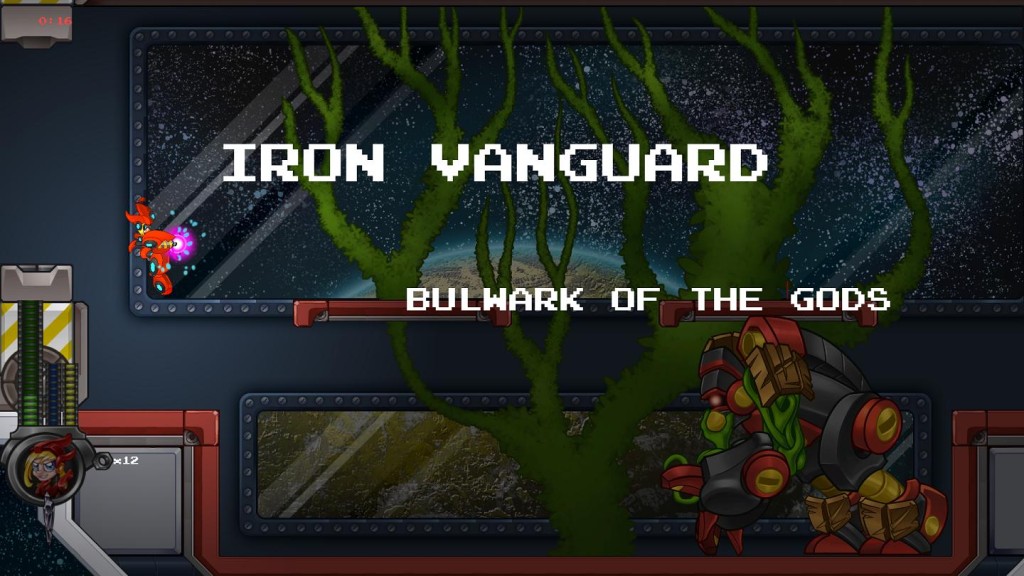 Each level in Echoes of Eridu is built of a chunk, and those chunks are comprised of smaller bits. Basically, each level is built of a series of themed rooms, as it were, which can vary in order size, and the bits that make up those chunks are also subject to variation. Thus, levels will sport recognizable patterns and areas, while remaining generally fresh every time you end up in a level with the same theme as the last. The build I played is reported to be around 20-25% complete. Currently there are two levels with different feels and sets of enemies, and upon finishing one, you’ll simply travel to the other, then back again into infinity.

The patterns became evident fairly quickly, but I was surprised by the ways that the elements that changed could drastically alter how a portion of a level felt. My first time through the first stage, I ended up in a very spacious area, filled with platforms that would fall after they were touched. I eventually ended up in that same area the third time through that stage, but this time the falling platforms were replaced by strange blue ones that blinked in and out, instead requiring timing over speed. 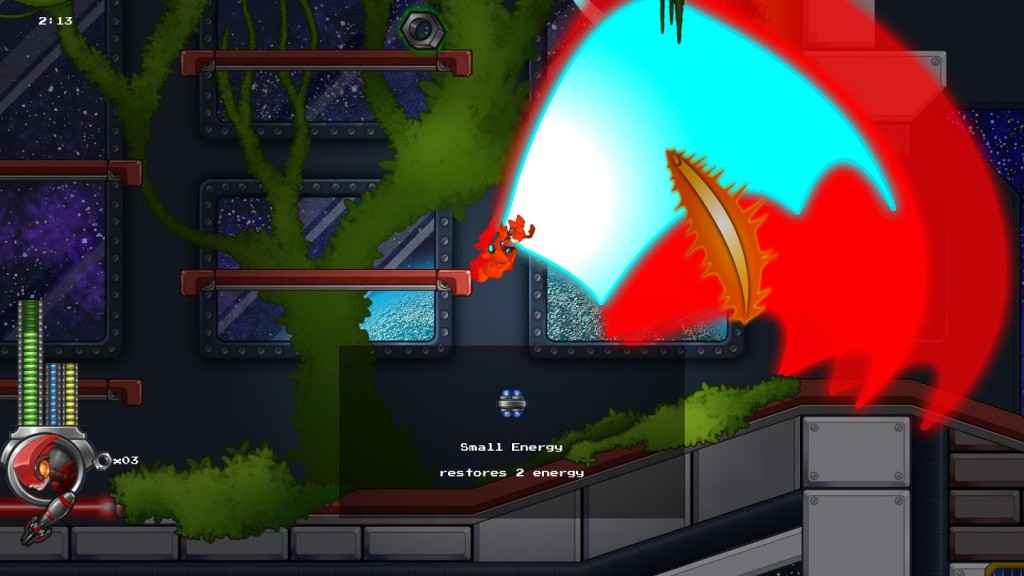 The game also takes a page from Risk of Rain‘s idea of collecting various random items that tweak your character’s performance in different ways. These items are not limited to a single acquisition (in most cases) and continue to stack as you gather more. While more are certainly set to be implemented, currently the items all affect things like damage, health, and mobility. These upgrades are supplemented by a series of subweapons that can offer a different way to engage your enemies, at the cost of energy. Vera acts as a standard, rapid-fire projectile that fires straight forward, while the obsidian spurr projects a short crystal aura around you for a brief period, dealing high damage in a small area. You start with one, and generally acquire another after each boss, allowing you to switch between any you’ve acquired on that playthrough from then on.

It is clear that the items will need significant balancing. As it stands, many of the items stack linearly without an sort of cap. As I collected items that reduced my energy usage, for instance, I reached a point where firing my weapon actually recharged my meter, and I became able to use my secondary weapon with impunity. I was able to quadruple jump, and I moved so fast, that I was horrifically unable to prevent myself from colliding violently with my foes. At that point, though, my health bar ran the entire height of my monitor, so that had become a non-issue anyway. 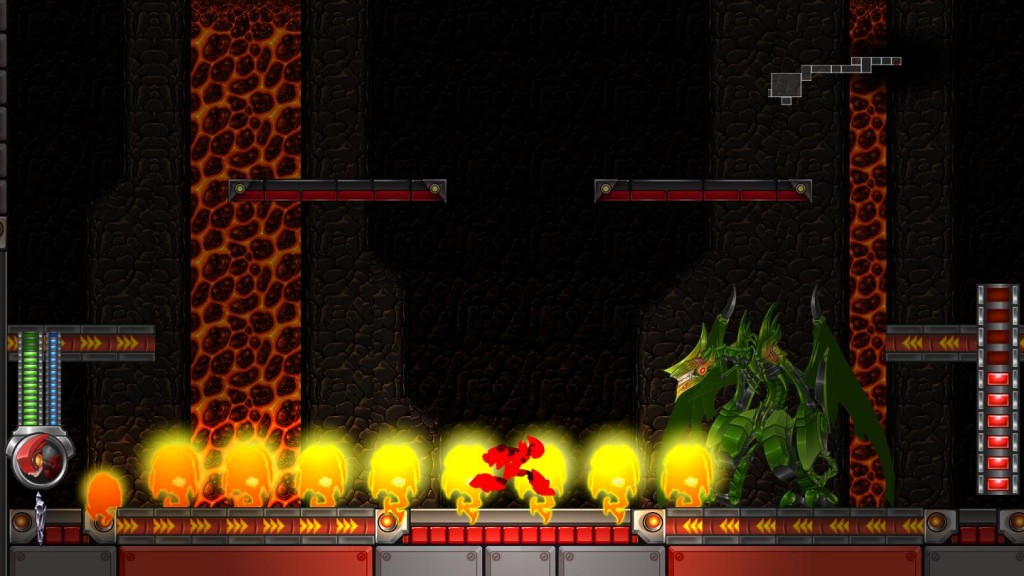 The last collectibles available currently come in the form of blueprints. These unlock permanent pieces of an arsenal, which you can select at the beginning of your playthrough to more dramatically alter the way your character behaves through the match. Nina’s gun traditionally behaves just like you would expect: it can fire a single shot straight forward. Some blueprints, however, allow you to shoot in all four cardinal directions at reduced damage, or use slower-moving projectiles that do considerably more. Ace can get a sword that grows in size the more you hit enemies in a short period, or a dual blade that lets you slash in front of and behind you simultaneously. A piece of armor might grant you massive damage, but only one health, or reduce your mobility but give you a double jump from the start. 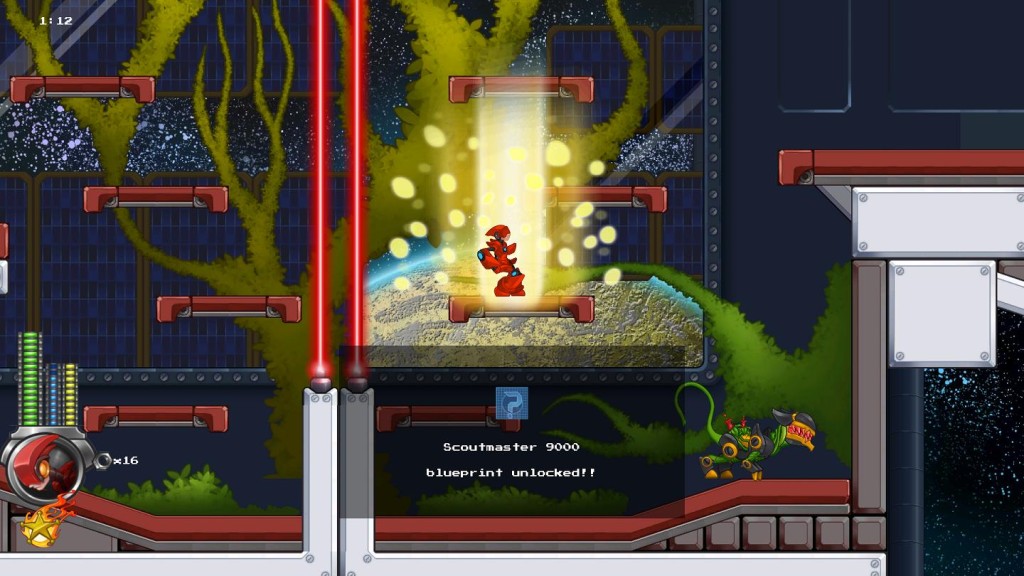 All of these things are presented in a very colorful cartoon style that has a lot of potential. The alpha is still using a lot of placeholder graphics and sounds, but the enemies all have that anthropomorphic quality that lends them a lot of character, and the two available level themes share enough qualities for obstacles to be immediately recognizable, but are different enough in composition and construction to ensure they have a feel all their own. The soundtrack, small as it is for now, is catchy, as well.

More than anything else, though, what the game has is love. Many of the game’s elements already exist in some form or another, this much is obvious from the descriptions you can read right off of their Kickstarter page. While things here may not be as well tuned as the source that inspired them (this is an alpha, after all), they’ve been put together with an evident sense of radiance that comes through in a game that has a lot of soul. And even if the mechanics aren’t exactly unique, the combination of them doesn’t feel old or overdone, and if the game’s descriptions of the effects given by various aspects of your arsenal are any indicator, it’s got plenty of personality of its own.

he other kicker here is that the game features a full-fledged multiplayer mode, allowing two people to rampage around together and put down the robotic uprising.

I’ll put a trailer for you to check out Echoes of Eridu below. The game has five days left in its Kickstarter, and only $4,000 dollars to go as of this writing. If this is something you want to see happen, go out and show them some support. You can see them in action every so often when the livestream the game over at http://twitch.tv/batterystaplegames.