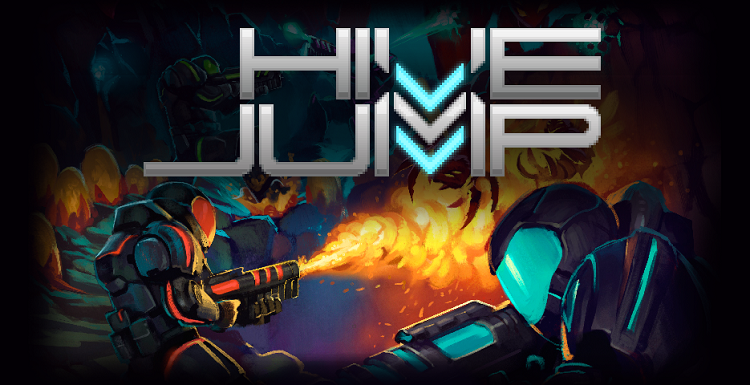 Contra was one of my favorite games growing up. There was something supremely challenging about its hectic side-scrolling shooter atmosphere. I remember spending countless hours trying to get to the end boss, and thanks to a lack of save points, it was a long and arduous journey. Even with a friend, it seemed nearly impossible to reach the end. Fast forward to now, and a new Contra-esque adventure is making its way into the gaming world. Hive Jump, from developer Graphite Lab, is hoping to capture these same feelings of frustration, action, and hectic gameplay.

You’ll play as a member of the elite JUMP Corp, sent to a hostile alien home world in hopes of eradicating a bug-like species that has pushed humanity to its breaking point. You’re the last bastion of hope against the creepy-crawly menace, and the only way to truly put a stop to their treachery is to eliminate them from within their own hive. Equipped with a powerful suit of armor, and a series of impressive weapons, you’ll blast down to the alien planet and start eviscerating anything with more than two legs.

For the most part, Hive Jump plays out like a fairly traditional two-dimensional side-scrolling shooter. You’ll find a variety of weapons that you can upgrade and unlock to help you slay your enemies. A small jet pack will help you reach those hard-to-access areas, and the bug home world is littered with specialized buffs and skills that you can use to gain the upper hand. But don’t think this will be just another walk in the park. Your enemy may fall to the might of your powerful weaponry, but they are numerous and can quickly swarm you. You’ll need to plan your attacks accordingly to ensure that you don’t end up as their dinner. You’ll be able to customize and tailor attacks your playstyle, and a strategic map deployment mechanic will help add a layer of tactics to your arsenal. Still, with cramped quarters, and a procedurally generated maze of tunnels and pathways, it’s easy to understand why your job is so difficult.

Thankfully, Hive Jump features a helpful gameplay mechanic that will make your job a little easier. It’s also one of the best selling-points for this adventure. You’ll be able to bring up to three friends along for the ride via a cooperative multiplayer mode. Right now, in its early access, Hive Jump only features a local cooperative scheme, but an online cooperative journey via Steam is planned for release in the near future. Smashing virtual alien bugs can be entertaining, but smashing them with friends is an entirely new level of fun. Just remember that though there is strength in numbers, you’re still simply four operatives faced with a horde of thousands of bugs.

If you’re interested in getting in on some early bug squashing, boss fights, weapon customization, and multiplayer mayhem, you can grab Hive Jump for $19.99 right now on Steam. It is important to note that the release is in early access, but the developers are working hard to unveil new content for the game at every opportunity. The group is also planning a Wii-U release sometime in the future. For more information about Hive Jump, be sure to check out the dedicated website here. You can also follow Graphite Lab on Twitter for any news and updates.