It was many people’s first exposure to the world of contract killing, Hitman was.

It was a game quite unlike many of the action games of the time—a game that discouraged grabbing the biggest guns you could and obliterating the face of every single person in sight. Instead, it took a page from the strategic games of the time: keep calm, prepare properly, execute efficiently.

The series has, in some ways at least, abandoned those old notions, growing faster and faster over time in an attempt to solidify the genetically-enhanced killer clone as one of the most effective assassins on the planet.

In an attempt to introduce some variety and a bit of incentive for picking up Hitman: Absolution back in 2012, IO Interactive released the Hitman Sniper Challenge, a sort of puzzle shooter in which Agent 47 is placed in a static perch and tasked with eliminating a high-value target. 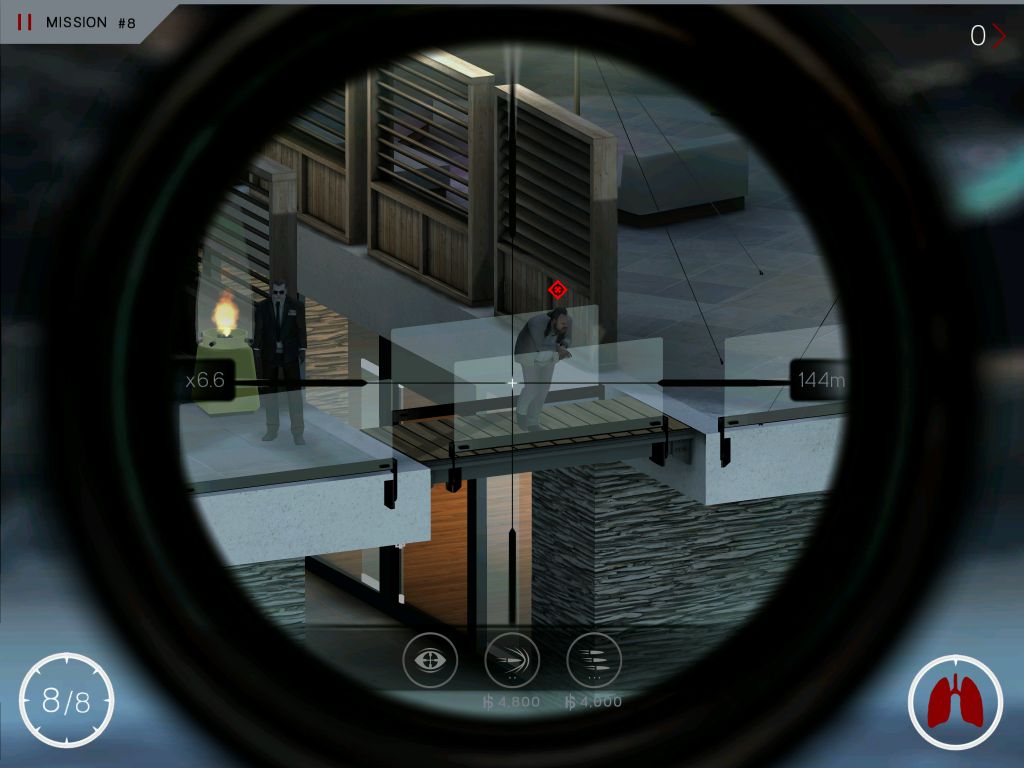 This target is surrounded by security, of course, and while it may be simple to just shoot the target and be done with it, the game is a little more intense than that.

Consider this the arcade version of Hitman, then. While retaining some of the identifying elements of the original series—clever use of your environment, deliberate selection of your actions, and precision in execution. But now, you’re awarded points for your actions in order to drive you to become the best sniper you can be.

The Sniper Challenge was widely well-received. As pre-order bonuses go, it’s more substantive than a costume or a basic weapon pack, or a one-time currency boost. Leveling up in the bonus unlocked extra advancement in-game, as well as providing a self-contained gaming experience of its own—even if it was a fairly limited one.

Hitman: Sniper is the logical extension of this concept. The Sniper Challenge was popular enough to merit a standalone release after some time, after all (though it is a bit expensive for what you get out of it), so to roll with it is a sensible decision.

Rather than appear on PC and consoles this time, however, the game is spreading across tablets in an attempt to deliver an experience more suited to the platform.

That was the bit that was a little off about the Sniper Challenge. It felt like there could be a lot more done with the platform available, but a mission of this style wasn’t recreated in Absolution, and on its own the game isn’t terribly valid—it’s a single level, after all.

The experience has been expanded and enhanced by the touch interface in a variety of ways to make the experience more compelling. 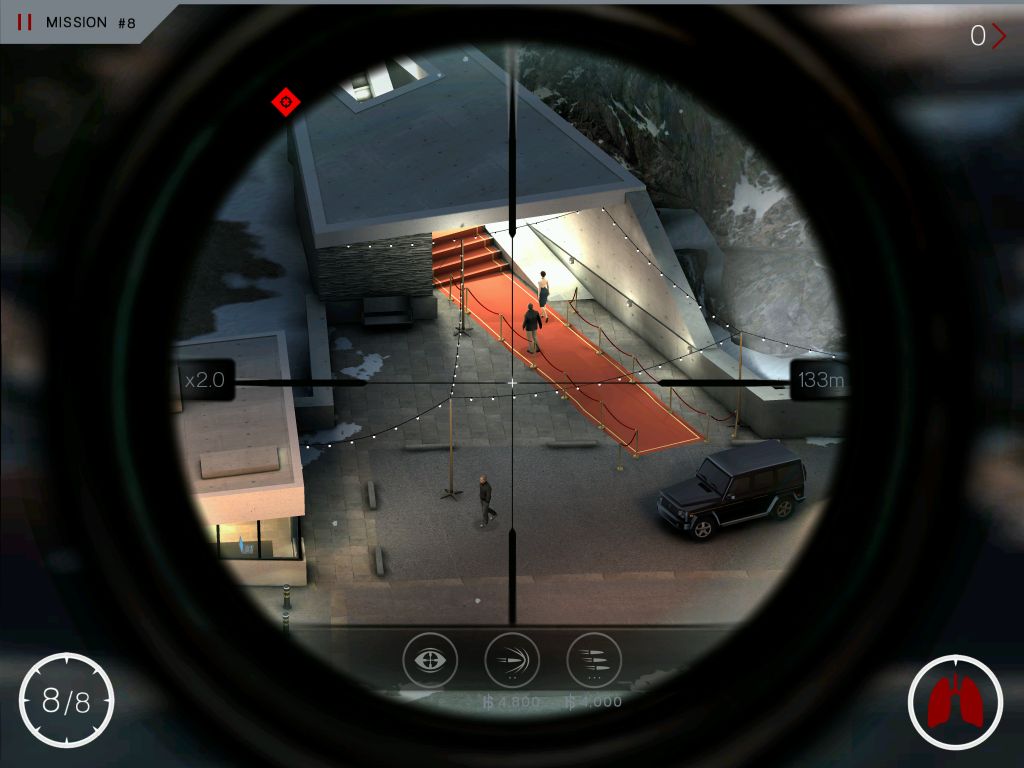 The essence of the gameplay is the same. Using your selected sniper rifle, you systematically eliminate security guards and eventually your contracted mark. The goal, in traditional Hitman fashion, is to do this without anyone noticing. You’ll accomplish this by observing the patterns of behavior from guards and the mark, knowing your environment and using it to your advantage, and occasionally with quick twitch reflexes and heightened instincts.

For example, the level I was able to attempt at SDCC this year was located in a posh apartment. With several floors, a hot tub, entertainment rooms, a large patio, a pool, and many vantage points for rich drunk people to look over the city with, the place was riddled with opportunities to remove threats without notice.

If a guard walks close to a ledge, a well-placed shot will not only take them out (providing a base point bonus), but a headshot will push their body a little further (also another point bonus), and drop their body off the ledge so others won’t notice the corpse (a much larger point bonus). You can duplicate this effect with the hot tub or the pool, as well. You’ll need to steady your aim to do this, simply accomplished by tapping a button to hold your breath for a moment.

You’re not relegated to dropping bodies off the stage, either. Some levels might allow you to shoot an elevator control panel to open the doors and drop a guard down the empty shaft. You might shoot out a light or other object in the environment to attract a guard’s attention and draw them to a location where the others won’t patrol and notice the body.

You can identify possible elements using your Instincts—a state in which threats are highlighted (even through walls) and objects with which you can interact are similarly indicated.

Guards will become suspicious if they hear unusual noises (like a large-caliber bullet striking a wall near their face or breaking glass) and might move to investigate. If a guard notices a body or something else out of the ordinary, you’ll be informed that a guard is on alert or might be sounding the alarm, and you’ll have to react quickly to prevent the alarm from going off and allowing the mark to escape. 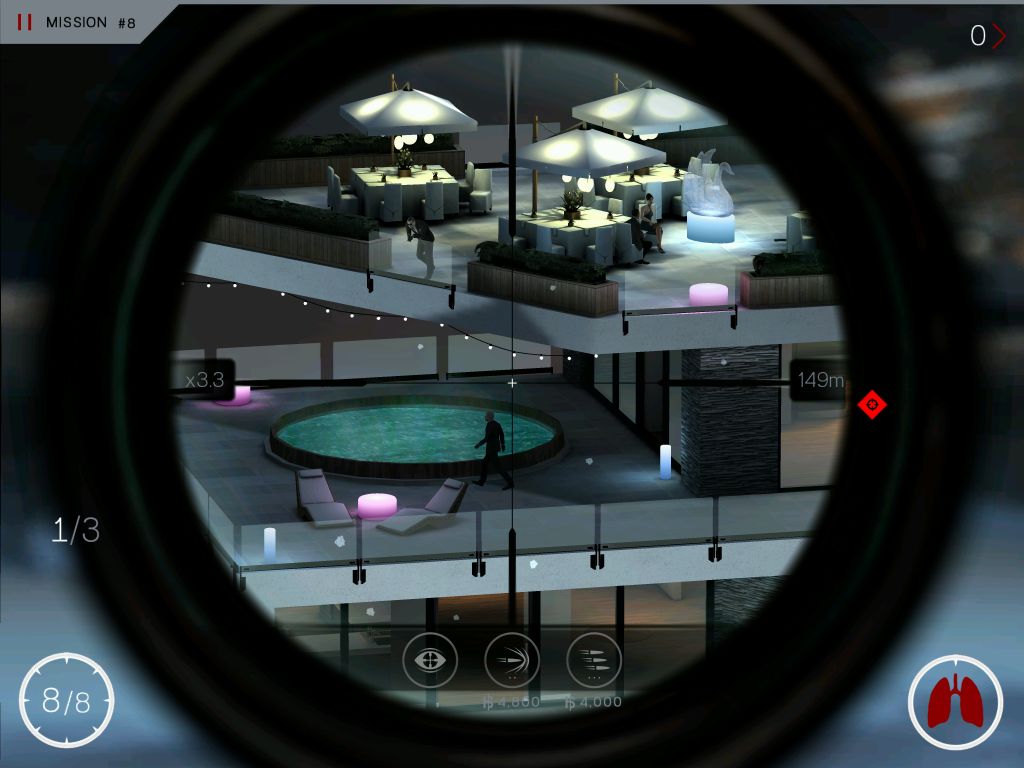 This is one of the mobile enhancements made to the game. Large threats are marked with a series of indicators that ring your scope while you’re aiming your rifle, tapping one of these will center your view on that threat, rather than requiring you to swipe your finger over and over to find the problem.

Reloading is another aspect of the game that has been enhanced for Sniper, becoming a much more involved process with a series of swipes for ejecting the magazine, placing the new mag and setting the bolt. While only one rifle was available for the demo, I assume other rifles might have a different set of reloading events making them more or less difficult to handle. Miss a swipe, and you’ll fumble—losing precious seconds, especially in high-stress situations.

You have other tools at your disposal, as well. Supersonic ammunition allows your bullets to travel faster, requiring less lead time on moving targets and carrying their bodies further than normal, or abilities that might let you “bypass” the bolt action on a rifle (in a sense) and fire it much faster than normal. These abilities require a purchase during the stage to use.

By quickly and efficiently eliminating as many guards as possible before hitting your mark, you’ll be awarded a score as well as your contract fee, plus bonuses. Scores will be saved on worldwide leaderboards so you can brag to your friends (or a bunch of strangers), and you can use money and experience to gain levels and unlock new weapons, upgrades, and abilities that will allow you even more opportunities for beautiful violence.

While I may be a sucker at times for a more cerebral puzzle/shooter with RPG elements like this, it’s not all sunshine and rainbows. There have been obvious concessions on the visual front for mobile devices, but considering all that the game looks alright. While the touch controls have in a few ways enhanced your control and allow you to quickly respond to immediate threats, the game misinterpreted my inputs at times and ended up being downright unreliable at other times.

Lining up a precise shot will occasionally result in your firing a bullet when trying to make subtle adjustments, and the reloading swipes don’t have terribly effective indicators as to how much time you have to complete them, and would often fail to respond without rote memorization of the movements and needlessly quick execution.

Plus, the game might be a little more niche than many of the other games of this sort. When you look at games like Contract Killer on the Play Store, for example, you see a game that’s essentially like this one (much older, though) and is more action-focused than this one is. These sorts of games are fairly popular and the introduction of this sort of stealth paradigm and the whole wait-and-observe train of thought provide a less immediate sense of satisfaction—a cornerstone of the more hardcore mobile gaming market. In this instance, Contract Killer is free, just as Hitman: Sniper will be, though Sniper won’t have limitations on gameplay. It will feature in-app purchases to allow for faster advancement and unlocks, however.

Technical limitations aside, the game, I think, is well put together on the whole. It falls in an unusual space: a smaller, simpler title from a large developer, but it’s a game that’s easy enough to pick up and understand while still holding a lot of nuance and rewarding those that put time into learning to play it better. Plus, it has a lot of that trademark Hitman humor that you’ve come to expect from the stranger parts of the series (in the demo level, if you shoot a cue ball on a pool table, it sinks the 8-ball, leading to an argument between the people in the room and ends with one murdering the other. Levels are also occasionally filled with ducks to find and other strange bonuses for eagle-eyed players). 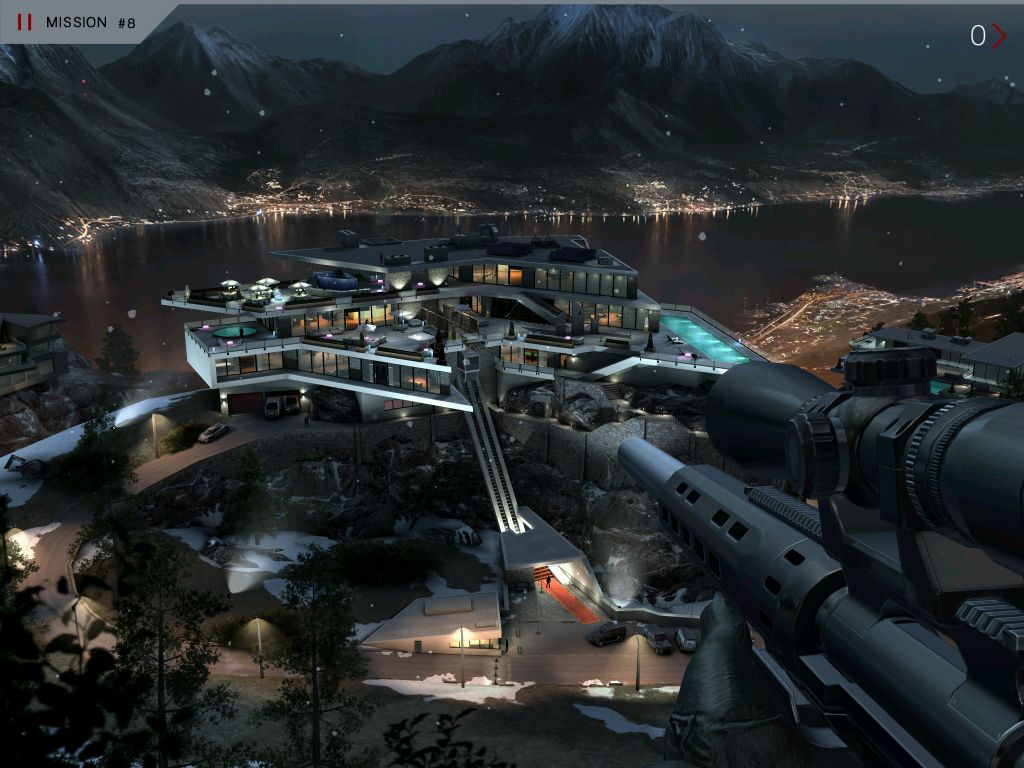 The game is releasing on iOS and Android tablets soon, though no specific release date has been announced, it will be quite soon.