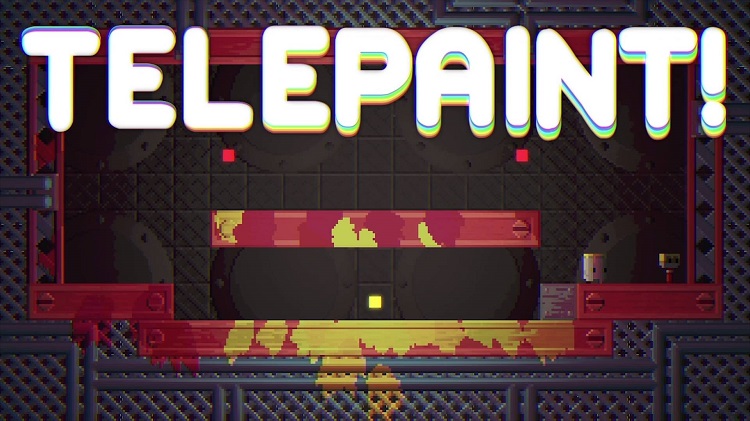 If video games were judged solely on style points alone, upcoming indie puzzle game Telepaint would be a ten-out-of-ten. Developer Acid Nerve has already turned heads once in the gaming world with their popular release Titan Souls, and is hopeful to spark the same craze across the community with a turbulent tale of powerless paint buckets. Telepaint is one-part visual entertainment, one-part puzzle game, and sometimes a few parts frustration. Who knew paint buckets could be so helpless?

The buckets aren’t very intelligent and lack any sort of self-preservation. They walk endlessly in one direction until they bump into something. This causes them to turn right around and lumber off in the opposite direction. The buckets can’t jump, or fend off dangerous enemies. They simply hobble, leaving it up to you to ensure that they safely arrive at their destination. Each level will have you guiding at least one paint bucket towards a paintbrush pal. Those of you who played the popular “guiding puzzler” of the ’90s, Lemmings, will understand how monumental this task will be.

The life of a paint bucket isn’t easy. Along their journey, these innocent little pails will meet a variety of dangers. Pits, enemies, and deadly spikes are just a few of the hazards lurking around each corner. Much like in Lemmings, if a paint bucket so much as touches one of these things it will explode into a shower of color. In fact, it doesn’t even really need to touch anything. These little blobs of paint will shower the walls in varying hues if they drop off high platforms. This really amps up the eye candy. As you progress you’ll be forced to corral multiple paint buckets at a time, with success or failure looking like something from a Jackson Pollock painting. I give Acid Nerve a lot of style points, as Telepaint is a gorgeously crafted experience that boasts cute — yet supremely artistic — visuals.

The gameplay for Telepaint isn’t nearly as foreboding as Lemmings. You won’t find yourself sifting through various types of paint buckets to keep a massive herd moving. Instead, you’ll have to keep an eye on teleporters, switches, keys, locks, and other movable objects. The paint buckets themselves are constantly moving, which will keep you on your toes and force you to think on your feet. The key to victory is to map out a particular path of success before the little pail begins his journey, and you may find yourself restarting a level over and over until you can visualize the correct route. It looks to be frustrating at times, especially in the latter levels, but these types of puzzle games are often very entertaining. If anything, your want and need to succeed will often overpower any difficulty in your way.

Telepaint will offer up a solid chunk of gameplay. You can expect to see at least 100 different levels, across six different worlds. Each world has its own unique art style, adding to an already beautiful game. If the challenging puzzle gameplay doesn’t hook you, the visuals and upbeat techno music should. I’ve always had a sweet spot in my heart for puzzle games, but there is something about Telepaint’s whimsical design and adorable protagonists that makes me extra-excited for this release. Hopefully this title will be just as popular as Titan Souls and developer Acid Nerve will continue to crank out interesting releases. Maybe even more on the puzzle front?

If you’re interested in getting more information about Telepaint, be sure to check out the dedicated website here. You can learn more about Acid Nerve here, and you can even follow them on Facebook and Twitter to keep up with developer news and future projects.