I’m a sucker for retro releases. I’ve spent a few years collecting some of the old game systems I grew up with, and occasionally I’ll scour eBay in search of games I wish to add to my collection. I recently grabbed Final Fantasy VI (which I consider to be one of the best titles in the series) and spent a few hours reliving the entertaining storyline and gameplay elements. I’d forgotten how much I really enjoyed every aspect of that game. Given my current mindset, it’s no surprise that Helen’s Mysterious Castle caught my eye as I was sifting through some releases on Steam. Not only does it possess a similar visual style to the early entries in the Final Fantasy series, it provides a unique turn-based combat system that pays homage to some of the most prominent RPGs of the East.

Helen’s Mysterious Castle is very much an indie release, especially with its minuscule $1.99 price point. But don’t let that fool you — this title provides a lot of game hours and entertainment value for such a small amount of coin. The graphics themselves are easily worth the almost-negligible hit to your wallet. Visually, Helen’s Mysterious Castle features simplistic, yet well-made, two-dimensional pixelated eye-candy. The overworld (including any applicable buildings) is showcased through a traditional top-down view that is very reminiscent of the early 1990s RPGs that came out of Japan. The heroine, and each enemy she faces, appear very sprite-like in nature, but the pixel art is detailed and shaded enough to craft some very smooth visuals. With its colorful enemies, beautifully-painted backdrops, and retro-styled musical scores, Helen’s Mysterious Castle manages to provide a lot of audio and visual entertainment. 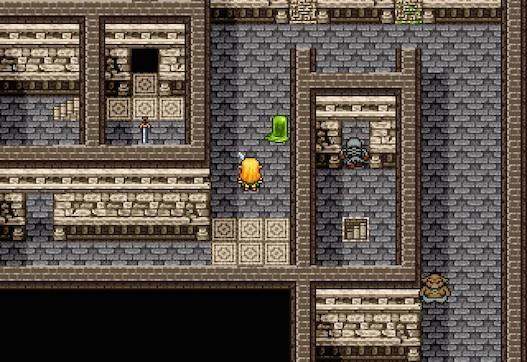 The real value of this release comes from its unique and rather impressive gameplay elements. As you make your way through a mysterious labyrinth-like castle, you’ll encounter a variety of enemies. These baddies can be seen on screen, and bumping into them will trigger a battle sequence. Battles take place on a horizontal two-dimensional plane, much like the ATBs in the Final Fantasy series. The combat in Helen’s Mysterious Castle are where things get interesting. Rather than control a character with a wild set of abilities and skills, you’ll be making combat decisions based on weapon types. You’ll enter the ruins equipped with only a bow, but as you progress you’ll discover a slew of different weapons that can aid you in battle. Helen can carry up to eight different weapons, and knowing which weapons to use in a given fight is the key to victory. Each enemy you slay will reward you with EXP that can be used to upgrade your weapons and spells.

When a battle starts, both the enemy and Helen will attack according to a “Wait” gauge. This wait time varies between enemies, and each weapon that Helen uses has a different skill-set and attack speed. This is where things can get rather difficult. The game won’t tell you which items to use against which enemies, and you’ll be forced to simply observe your foes to figure out their strengths and weaknesses. Because of this, you might find yourself stuck in a Dark Souls-type loop, where you’re endlessly dying and learning lessons from it. The good thing is that dying causes no penalty in Helen’s Mysterious Castle. In fact, you’re actually rewarded for biting the dust. Each time you fall, you’ll simply wake up back “home,” where you will promptly receive a steak cooked by your helpful roommate. This food will permanently increase your heath-pool, making it that much easier to vanquish future foes. This helpful addition is great for the beginning of the game, but once you master weapon-switching you’ll find yourself steamrolling through your enemies.

Helen’s Mysterious Castle features a fairly-predictable story — although, in its defense, it does handle it in a unique way. There are no starting cutscenes for this release, and the story doesn’t set itself up like a traditional RPG. In fact, you won’t really see much of a story until you start to progress deeper into the castle ruins. There you will come across a small stable of interesting characters and unravel the mystery of the massive maze-like fortress.

If you’re interested in getting more information regarding Helen’s Mysterious Castle, be sure to check out the dedicated page on Playism. You can also grab the release right now on Steam. I rather enjoyed this release, and it offered up a lot of bang for the small buck. I’m hopeful that the developer, Satsu, will continue to crank out these types of retro-inspired RPGs. They’re a rather welcome breath of fresh air in a slightly-stagnant genre.